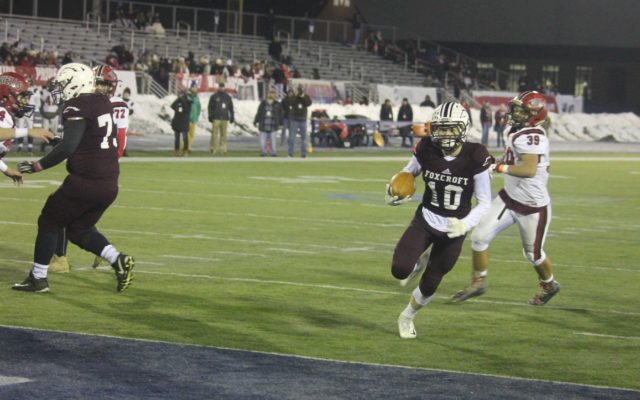 Stuart Hedstrom • November 18, 2018
The Wells High School offense decided to run the football nearly all night -- the team threw just twice with one of these plays being a halfback pass -- and the strategy paid off as the Warriors defeated Foxcroft Academy 55-20 in the 2018 Class D championship on the turf at Alfond Stadium at the University of Maine on the evening of Saturday, Nov. 17.

ORONO — The Wells High School offense decided to run the football nearly all night — the team threw just twice with one of these plays being a halfback pass — and the strategy paid off as the Warriors defeated Foxcroft Academy 55-20 in the 2018 Class D championship on the turf at Alfond Stadium at the University of Maine on the evening of Saturday, Nov. 17.

Wells (12-0) won its 28th consecutive game, a streak which includes a 48-0 victory over the Ponies one year prior in the D finale in Portland as well as the 2016 Class C championship contest. The Warriors became the only team to defeat 10-1 Foxcroft in 2018 scoring a season-high point against the Pony defense whose previous most surrendered was 26 one week prior against Bucksport High School in the Class D North championship.

The score was 7-0 in favor of Wells to start the second quarter before the Warriors scored three touchdowns in less than four minutes to go ahead 26-0. The team would add another touchdown several minutes later.

Observer photo/Stuart Hedstrom
2018 CLASS D FOOTBALL STATE CHAMPIONSHIP — Foxcroft Academy sophomore Logan Martin runs into the endzone through a huge hole in the line during the third quarter of the 2018 Class D championship between the Ponies and Wells High School on Nov. 17 at the University of Maine. Pony senior Eli Bickford, left, helped clear the way as Martin ran away from Wells sophomore Jonah Potter (39). Wells would win 55-20 to claim the program’s 28th consecutive victory, which includes a 48-0 win vs. Foxcroft in the 2017 Class D finale in Portland.

“I thought we struggled a little bit to start trying to figure out what we were going to do,” Wells head coach Tim Roche said about his team’s play to begin the contest. “Then we made a slight adjustment, I honestly think it was by an assistant coach or the kids I can’t remember, take the wing and block him down on the end instead of the tight end trying to take the wing and then bang (senior Tyler Bridge is) gone and we seemed to figure it out from there.”

Bridge ran the football 16 times for 207 yards, finding the endzone five times. He scored from a yard out to start the Wells offensive onslaught in the second quarter and, following a three-and-out by the Warrior defense, ran the ball 58 yards to the endzone.

A Wells interception gave the football back to the D South squad, and on the first offense play Bridge threw the football 42 yards to junior fullback Payton MacKay as Bridge had a hand in six of his team’s seven touchdowns. MacKay scored on a 24-yard run in the first quarter as he ended the night with 13 carries for 173 yards and a touchdown along with the 42-yard touchdown reception.

“Those two are unreal when they have the play, they just don’t want to go down,” Roche said.

Observer photo/Stuart Hedstrom
NON-COVETED HARDWARE — Four of Foxcroft’s senior captains, from left, Jeremy Richard, Hyatt Smith, Eli Bickford, and Michaleb Niles, come forward to accept the runner-up plaque following the 2018 Class D championship between the Ponies and Wells High School at the University of Maine on Nov. 17. Wells won 55-20 as the Warriors have now won 28 consecutive games, including a 48-0 victory vs. Foxcroft in the 2017 Class D finale in Portland.

“They’re the three-time defending state champs for a reason, they’re very good across the board and we knew we had to be very good and they were just better,” Foxcroft head coach Danny White said. “I tip my cap to them, they’re as good as we’ve seen and maybe as good as I’ve ever seen two years in a row.”

A year after being shutout by Wells in the state championship, the Ponies scored three touchdowns in the rematch. The 20 points tied the second-highest total given yielded by the Warriors in 12 games with 22 being the high mark.

In the final minute of the opening half Foxcroft had the ball at the team’s own 46-yard line. Rather than keeping the ball on the ground the team went for the big play as senior quarterback Matthew Spooner took the shotgun snap and looked down the field. He spied sophomore Logan Martin open to the left and Spooner placed the football in Martin’s grasp as the slotback got behind the coverage.

Observer photo/Stuart Hedstrom
GETTING AROUND BRIDGE — Pony senior Hyatt Smith looks to make a move on Wells senior Tyler Bridge after hauling in a catch during the second quarter in Orono on Saturday evening. Smith had a game-high seven receptions.

Martin got to the endzone for the 58-yard touchdown pass to put the Ponies on the scoreboard, and sophomore Levi Stedman followed with the PAT.

Spooner would throw for 121 yards on 11-of-22 passing with a touchdown and interception, and seven of the receptions were made by senior Hyatt Smith for 36 yards.

“They threw the ball a little on us, but they couldn’t run on us so I thought that was good,” Roche said.

Observer photo/Stuart Hedstrom
FASTER THAN THE SECONDARY — Sophomore Logan Martin runs away from Wells juniors Jacob Scott (28) and Payton MacKay (34) for a 54-yard touchdown pass from senior quarterback Matthew Spooner to put the Ponies on the scoreboard. Martin would also score on a 2-yard run for a pair of trips to the endzone.

In the third quarter Foxcroft took advantage of kick return senior Michaleb Niles brought back the Wells-36 — the Warriors opted for squib kicks rather than booting the football deep to Smith and classmate Jeremy Richard. The Ponies used seven plays and a pass interference call on a third-and-7 to get down to the 2-yard line.

On a second-and-1 Martin took the shotgun snap and he found a huge hole in the right side of the line for the his second touchdown. Stedman’s PAT made the score 41-14.

With less than five minutes to go, the offense began at the Pony-28. On first down Richard took the handoff and he ran down the right sideline before cutting back inside and not stopping until crossing the goalline for the 72-yard touchdown. Richard had a team-high 73 rushing yards in four attempts.

Observer photo/Stuart Hedstrom
RUNNING BEHIND HIS BLOCKERS — Pony senior Jeremy Richard runs to inside the Wells 5-yard line as sophomores Sam Clawson, left, and Logan Martin block Wells juniors Devin Chace and Jacob Scott respectively. Martin would score on the next play from two yards out.

“I’m just awful proud of our kids, I’m awful proud of the way they represented themselves all season and they just kept working hard every single week to get better and they did that for the most part,” White said. “I’m just really proud to be able to be a part of this program.”

The Class D championship is the second for Wells at that level. In addition to the 2016 Class C title the Warriors had played in five Class B title contests, winning in 2011 and 1997.

Since the Maine Principal’s Association began crowning a state championship in a matchup between regional winners, Foxcroft has now appeared in 14 title games (winning five Gold Balls and two other state championships in the 1960s). The Ponies advanced to the finale for the fourth time under White in his 10 seasons guiding the Ponies, following last year’s berth, winning the Class C championship in 2012 during the final season of the three-class system, and reaching the 2009 Class C finale in White’s first year.

Observer photo/Stuart Hedstrom
SATURDAY NIGHT LIGHTS — A few inches of snow the previous day moved the 2018 Class D championship back a day, but the Ponies got to run on the artificial turf as senior Michaleb Niles takes the handoff from classmate Matthew Spooner to carry behind the blocking of seniors Sekton Wandikbo (27) and Eli Bickford (73) and Caleb Ladd (67).

Observer photo/Stuart Hedstrom
HOPING TO BURST WELLS’ BUBBLE — The Foxcroft Academy football squad runs onto the field at UMaine for the 2018 Class D championship against Wells High School. The two programs entered as regional No. 1 seeds with the Ponies having gone 10-0 to claim the North title and Wells entering as the 11-0 South champions.