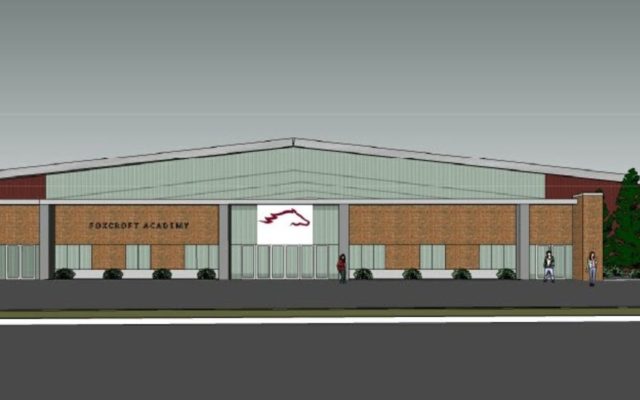 Ernie Clark, Bangor Daily News Staff • June 22, 2018
Foxcroft Academy is embarking on a fundraising campaign for the construction of a new field house on campus, boosted by a lead commitment of $2 million from the Libra Foundation.

DOVER-FOXCROFT — Foxcroft Academy is embarking on a fundraising campaign for the construction of a new field house on campus, boosted by a lead commitment of $2 million from the Libra Foundation.

“We have a lot of work ahead of us, and it will take help from alumni and friends near and far, but I believe the Foxcroft Academy community is ready to rally together and take on this challenge,” Foxcroft Academy head of school Arnold Shorey said in announcing the plans. “We envision this space as the next step for our school and community.”

Plans for the $5.5 million project include an artificial turf field the size of a regulation field hockey field with a track around its perimeter as well as a weight room and locker rooms. The facility will serve to increase space on campus for student activity while providing dedicated space for sports including field hockey, soccer, wrestling, track, baseball and softball.

There also are plans to coordinate community use of the field house, which would located on space next to the school’s football field that serves currently as a soccer field.

“The Foxcroft Academy board is committed to the work ahead, to make this facility a reality,” Richard Swett, chairman of the school’s board of trustees, said in a press release. “Because central Maine has a long winter, we feel that our students deserve this, but so does our town and the surrounding schools and communities. We are grateful to the Libra Foundation for their contribution.”

The lead contribution to the field house project marks the latest investment by the Libra Foundation in southern Piscataquis County.

The Portland-based nonprofit is spending approximately $10 million to develop an arts community in Monson to boost that area’s economy.

The Libra Foundation also is building a community ice arena on land near Foxcroft Academy, with the school managing day-to-day operations of that facility upon its completion.

“With the addition of a state-of-the-art ice arena and now a multipurpose field house, Piscataquis County will play a newly prominent role for families throughout the central Maine region,” said Jere Michelson, president, CEO and CFO of the Libra Foundation.

“We are pleased to generate this type of growth and new investment in an area so historically important to Maine and with a high quality of life.”

The field house will be the latest addition to the Foxcroft Academy campus since the original building opened in 1952. The Foxcroft Academy physical plant has grown with a gymnasium (1961), library and third-floor addition (1972), industrial technology buildings (1974), an English and music wing (1988), and the Fittig classroom and connector (2015) along with two dormitories and numerous other projects that have been completed.

“We have a school and a learning community that sees value in all aspects of education,” Shorey said. “This field house will add so much to that experience. We look forward to the day of completion, and the days of competition ahead.”

Graphic courtesy of Merriam Architects
FOXCROFT ACADEMY FIELD HOUSE — This is an artist’s rendering of a proposed $5.5 million field house to be built at Foxcroft Academy in Dover-Foxcroft. The Libra Foundation has pledged $2 million toward the project.