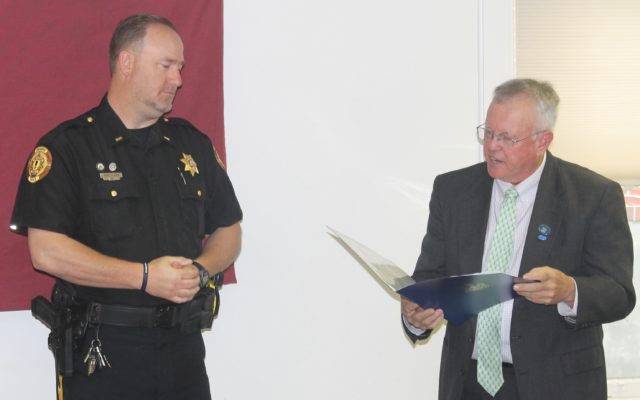 Stuart Hedstrom • June 22, 2018
Last month three bids for constructing a Piscataquis County Emergency Management Agency (EMA) storage garage all came in multiple times more than the project budget. The structure now has gone out to bid again with some revisions to the specs.

DOVER-FOXCROFT — Last month three bids for constructing a Piscataquis County Emergency Management Agency (EMA) storage garage all came in multiple times more than the project budget. The structure now has gone out to bid again with some revisions to the specs.

“They have readvertised the project with the changes we talked about here,” County Manager Tom Lizotte said during a June 19 meeting of the Piscataquis County Commissioners.

Lizotte said after consulting with Dirigo Engineering, a $100,000 performance bond requirement originally recommended by the project engineer was removed from the project specs. County officials had said the performance bond was a key reason why each bid came in well over budget.

Another change was made to the project timeline, as contractors can get the exterior done by Dec. 1 and then rest of the garage could be finished by June 1, 2019. Previously the project deadline was in September.

“Pushing this off into the fall allows people to finish it over the winter and that should make it more attractive,” Lizotte said.

“We will open those bids and hopefully get some at next meeting on July 10,” he said.

At the present time the county leases space at a Dover-Foxcroft municipal garage for vehicle and equipment storage, and other EMA gear is housed at the bunker in Milo. The agency also utilizes the county parking lot and building.

Plans called for the 1,400-square foot storage garage to have three bays for the Piscataquis County EMA and a fourth bay for the county maintenance department. The maintenance portion of the structure would be separated from the rest of the building with its own entry. Storage space will be located upstairs for both departments.

The storage garage would be built on the county campus, near the edge of the property by School Street. The EMA structure would be placed away from East Main Street, leaving room for a potential new sheriff’s office.

Piscataquis County EMA has $58,000 in capital reserve and $10,000 proposed in the current budget for the garage, which was approved by the commissioners in 2016. With the storage garage being used for emergency management, Homeland Security funds through Maine EMA can reimburse the county’s $16.500 engineering expenses.

Observer photo/Stuart Hedstrom
HONORING THE VALLEY GRANGE CITIZEN OF THE YEAR — Rep. Paul Stearns, R-Guilford reads a Legislative Sentiment recognizing Piscataquis County Sheriff’s Office Lt. Jamie Kane as the Valley Grange 2018 Community Citizen of the Year, during the June 19 meeting of the Piscataquis County Commissioners in Dover-Foxcroft. Kane was presented with the Community Citizen of the Year honor during a surprise ceremony with family and friends in attendance last month at the Grange Hall in Guilford in recognition of how he goes above and beyond the call of duty and gives back to the community in other ways.