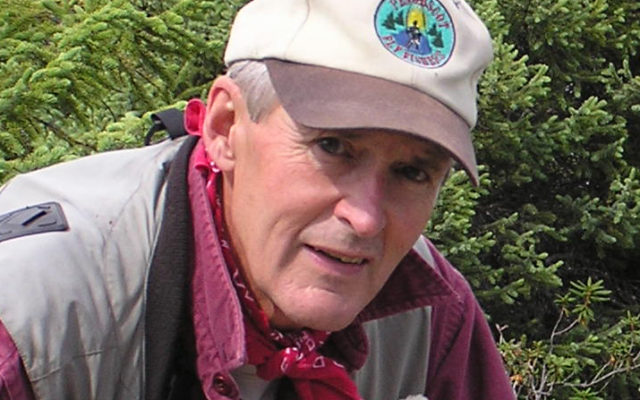 V. Paul Reynolds, Special to the Piscataquis Observer • May 4, 2018
In the 1980s and early 1990s, in May and June, you could catch a fresh run Atlantic salmon on the Penobscot River. And you could play your king of game fish within eyeshot of downtown Bangor. As a result, salmon clubs popped up along the river banks like ostrich ferns.

In the 1980s and early 1990s, in May and June, you could catch a fresh run Atlantic salmon on the Penobscot River. And you could play your king of game fish within eyeshot of downtown Bangor. As a result, salmon clubs popped up along the river banks like ostrich ferns.

Those were heady times. Then the salmon runs fizzled, for a lot of different reasons. Soon the popular game fish was declared an endangered species by the Feds and fishing stopped. Interest in the salmon clubs faded almost in lockstep with the inaccessible fishery. Club members aged or passed away. What was left was mostly cribbage clubs.

Not surprisingly, Gayland Hachey, one of the founders and mother hens of the Veazie Salmon Club, announced this spring by email that, as far as he was concerned, the club, which had lost so many members and had not had an organizational meeting in years, was in its death throes. Hachey said that they would continue to pay the bills until the money ran out and eventually give the club building, located on the river bank, to the town of Veazie.

This death notice got some attention. Long-standing members Bob Wengrzynek and Jim Matarazzo, and some others, said, “No way! This club needs to be saved – resuscitated and reformulated.”

According to Wengrzynek, his group has created (in line with the club by-laws) an ad hoc slate of leaders who are determined to breathe new life into the club. “We will reapply for the non-profit status, which was lost,” he says, “and we will get organized again and develop an active membership.”

The group plans to launch a new-members drive, as well as a fund-raising campaign and a solicitation of corporate sponsorships. The membership fee is $50 a year and applications are available from officers and board members. Jimmy Matarazzo can be reached at 852-6099.

This is a good thing. The Veazie Salmon Club, like all of the salmon clubs on the river, has a rich history and a legacy worth preserving and cultivating, salmon or no salmon. As Matarazzo points out there is still fishing to be enjoyed on a river that has been restored in so many ways. Striped bass, smallmouth bass and shad can provide wonderful angling opportunities, all within view of the fabled porch of the Veazie Salmon Club. There is a loud bell on the porch still today that was always sounded in the good old days when an angler had a salmon hookup.

The author is editor of the Northwoods Sporting Journal. He is also a Maine Guide, co-host of a weekly radio program “Maine Outdoors” heard Sundays at 7 p.m. on The Voice of Maine News-Talk Network (WVOM-FM 103.9, WOVM-FM 101.3) and former information officer for the Maine Dept. of Fish and Wildlife. His e-mail address is vpaulr@tds.net . He has three books “A Maine Deer Hunter’s Logbook”, “Backtrack.” And his latest “The Maine Angler’s Logbook.” Online purchase information is available at www.maineoutdoorpublications.com..