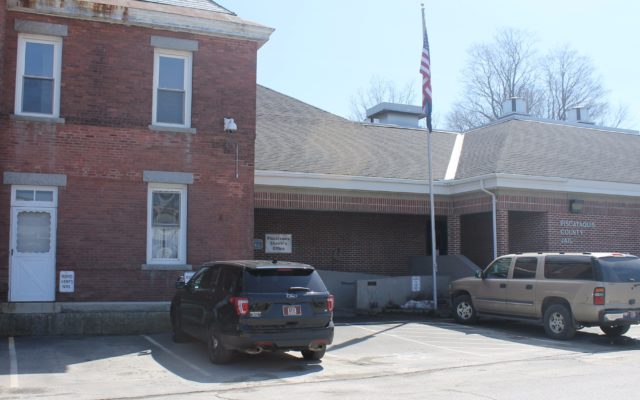 Stuart Hedstrom • March 27, 2018
The Libra Foundation investment in Piscataquis County, which includes revitalizing downtown Monson and the planned construction of an ice arena on West Main Street in Dover-Foxcroft, is continuing as the Portland-based organization is donating $20,000 to fund equipment to improve emergency communications for the Monson and Dover-Foxcroft fire departments.

DOVER-FOXCROFT — The Libra Foundation investment in Piscataquis County, which includes revitalizing downtown Monson and the planned construction of an ice arena on West Main Street in Dover-Foxcroft, is continuing as the Portland-based organization is donating $20,000 to fund equipment to improve emergency communications for the Monson and Dover-Foxcroft fire departments.

Piscataquis County Sheriff’s Office Dispatch Sgt. Gary Grant told the county commissioners during a March 20 meeting that officials from the Libra Foundation have been talking with the sheriff’s department over the course of the projects and they wanted to be able to assist emergency services in the region. Grant said he spoke with the two fire departments about the existing needs for improved communication capabilities and asked about the types of equipment that would help.

“They have agreed to donate $20,000 to the Piscataquis Sheriff’s Office,” Grant said. He said a new repeater and antenna will benefit the Dover-Foxcroft area, being located on Charleston Hill.

Grant said in Monson the fire department communications apparatus will be moved from the station downtown to a higher elevation location on the North Guilford Road. “We are going to put a 70-foot tower there,” Grant said. He mentioned a crew from the Charleston Correctional Facility may build a shed to house the equipment on site.

“That will eliminate hundreds of dead spots in those two towns so we are very, very appreciative of that,” Grant said.

“We are very fortunate for this $20,000 gift from the Libra Foundation,” Sheriff John Goggin said. “They wanted to do something for the Monson area and branch down into the Dover area.”

“The $20,000 is more than enough to cover both towers and the funds that are not used for the two towers will be set aside to be used for training,” Goggin said.

In other business, the commissioners met with District Attorney Chris Almy. Almy thanked the county officials for including funding in the current budget to continue a full-time investigative position in his office. At full-time the position had been funded by a STOP Violence Against Women grant in previous years.

Almy said last month he received a call from the Greenville Police Department, as the school-age daughter of a member of the department was the potential victim of harassment and threats. To complicate matters, the girl’s boyfriend was related to a sheriff’s deputy.

To avoid conflicts of interest on both sides, the case was handed to District Attorney’s Office Investigator Scott Arno.

With the incident in Greenville taking place soon after the school shooting in Parkland, Fla., Almy said “that just ramps up the anxiety and fear in the community.”

“The situation is still an active and ongoing investigation,” Arnos said, mentioning he will present his findings to Almy. Arno said he has spoken with both parents and school officials.

“It is very nice to have a resource outside the department to take away conflicts of interest,” he said.

“This is the perfect example of a need for an investigator who is impartial,” Commissioner Jim Annis said.

“What they have said is very true and it’s the ideal situation for why this position was created,” Piscataquis County Sheriff’s Office Chief Deputy Bob Young said.

“I think this is a perfect example of the investigator position working out,” Commissioners Chair James White said.

“And Chris thank for all those years of service,” White said to Almy.

The district attorney recently announced that he would not be seeking reelection in Piscataquis and Penobscot counties after having served in the position since 1985. He withdrew his nomination papers two days before the filing deadline upon learning that Assistant District Attorney Marianne Lynch was interested in succeeding him.

The commissioners signed a contract with Pavement Management Services, LLC to oversee this season’s work in Blanchard and Moosehead Junction townships.

County Manager Tom Lizotte said the paving will be .8 miles in Blanchard from Piscataquis River bridge to where the asphalt ends. Less than half a mile on both Depot Street and the Green Tower Hill Road in Moosehead Junction will be paved. He said the estimated $134,000 for all the resurfacing is included in the current budget.

“What he does is scope out the projects and oversee the work,” Lizotte said about the consultant. “We pay him per ton on the project.”

Lizotte said the bids for the paving will probably be brought to the commissioners in late April or early May. He said he would be talking about related ditching work with Road Agent Carl Henderson.

Piscataquis County Emergency Management Agency (EMA) Director Tom Capraro said the agency now has a flood watch page on Facebook under “Piscataquis County Flood Watch.” He said the page is modeled after one in Aroostook County, and residents can submit localized flooding pictures to go along with information provided by the EMA.

“It’s eyes on the ground if you like,” Capraro said.