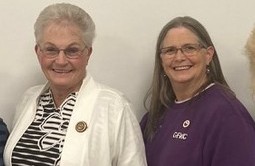 The GFWC Miosac Club met on Jan. 17 for its second meeting of the new year. President Minnie McCormick opened the meeting. She started by asking if members were wearing their club pins, does anyone not have one and has everyone brought their club booklets? There is important information in the booklets to be referred to each meeting. Changes could be made at any time and all need to be current. You may be called on to lead the Collect, Pledge and Creed.

Diane Leighton did the roll call. Fourteen members were present. She then did the secretary’s report which was filed as read.

Suzanne Raymond did the treasurer’s report which was filed for audit.

Brenda Quiet of the advisory committee reported that they would not be having the planned program about Pine Tree Hospice that evening. It will be postponed and rescheduled. Next meeting will be on Feb. 7.  The program will be making Valentine’s. Vickie Parsons is the program chairperson.

Anne Cress reported that Parsons will go back to being the lookout for the club. Parsons reported a couple members were ill.

The Foxcroft Academy art show chairperson, Wendy Hutchins, suggested talking about monetary prizes for winners and that they need a judge. Those items were discussed and a vote was made and passed. A judge will be asked to participate.

McCormick brought up that new pinwheels will need to be purchased for April’s yearly display for Prevent Child Abuse Month.

McCormick also said the Maude McKenzie Scholarship should be made available for seniors. Meeting was adjourned.

Snacks were offered by our Cress and Raymond.

The local area directory is completed and members were given lists of businesses to take them to.