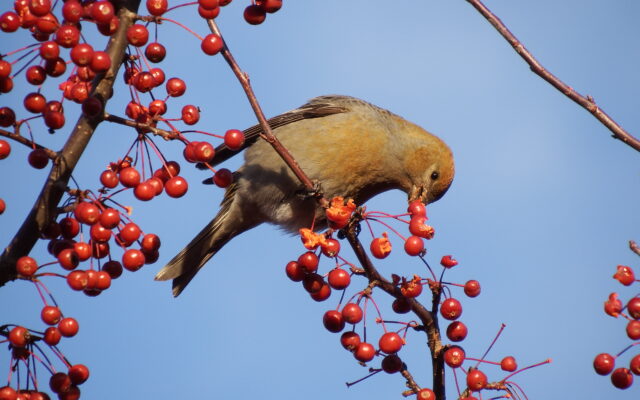 You can help scientists uncover the secret lives of Maine birds

Contributed • January 19, 2023
By Bob Duchesne The nice thing about being a citizen scientist is that you don’t have to be a scientist. Or a citizen.

The nice thing about being a citizen scientist is that you don’t have to be a scientist. Or a citizen. Literally, anybody can do it.

There are numerous ways to make a scientific contribution these days. If you can recognize a chickadee, you’re qualified.

There are two ways to study birds. There is the traditional way, whereby biologists trap and band birds, hoping to recover the data later. Technology has added new muscle to this method, allowing science to track individual birds over long distances.

Then there is the other way, where volunteers watch birds and report to the biologists what they saw. The ability to accumulate and analyze massive amounts of data paints a picture of species distribution across huge areas, even across whole continents or the world. This method has been around for more than a century, starting with the annual Christmas Bird Count. It just celebrated its 123rd consecutive year.

Any idiot can be a citizen scientist, which is how I found myself in the woods west of the Allagash last weekend. For the last five years, the Maine Department of Inland Fisheries and Wildlife has been working on a Maine Bird Atlas, recruiting volunteers and sending them out statewide to look for birds. The summer breeding bird component finished last August, but the fifth year of the winter survey is in full swing right now. It still needs volunteers.

Frankly, surveying in winter is much easier than summer. It takes less time and less skill. There are fewer species around, and many are your typical backyard birds. It is not necessary to know every bird, and it’s OK to know barely any birds. Every positive identification of even the most ordinary bird counts. For those who have more experience, there are bigger challenges available.

If, like me, and you’ve been surveying all five years, you might have noticed a few things.

Is anything better than a quiet walk in the woods? Yes, a noisy walk in the woods. Last winter, finches invaded the North Woods. There were so many white-winged crossbills, pine siskins, common redpolls, evening grosbeaks, pine grosbeaks and purple finches that sometimes you couldn’t hear yourself think.

This year, not so much. While walking one of my favorite logging roads, even the chickadees and nuthatches were quiet and secretive, or totally absent. Many probably went south, perceiving the same meager food supply that kept the finches away this year.

Still, there were some subtleties. Two weeks ago, I walked the Capitol Road near Jackman. Over a two-mile hike, I encountered three different flocks of common redpolls, totaling 91 birds. It was the only finch species I came upon. One week later and 50 miles northeast, my only finches were small flocks of pine grosbeaks. Why the difference?

That is why we do the surveys, to understand how birds use the whole forest. One lone report from me is merely anecdotal. But if there are lots of people out doing surveys, and all the data are aggregated, we start to get a map of northern forest bird life.

To join the fun, most of what you need to know is at Maine.gov/ifw/fish-wildlife/maine-bird-atlas.

Meanwhile, citizen science projects abound all over the map, starting in your own backyard. The Cornell Lab of Ornithology offers Project FeederWatch, Project NestWatch and the Great Backyard Bird Count. For these projects, citizen scientists don’t even have to leave the house! Check out Birds.Cornell.edu/citizenscience.

Maine Audubon runs the annual Maine Loon Count on the third Saturday of July. This will be its 40th year. Visit MaineAudubon.org/projects/loons/annual-loon-count. Citizen scientists don’t even need to look for other species. They just need to count loons.

Then, come next December, National Audubon sponsors another season of Christmas Bird Counts. The opportunities are many.

You’ll recall that I’m not a trained biologist. I’m not even a naturalist. I’m an unnaturalist — I’ve learned a lot about birds, and little else. If I have a gift, it’s this: I can remember exactly where I saw my first black-throated blue warbler as a child. As an adult, I can’t remember where I left the car keys.

No matter your skill level, there are many ways to get involved. For beginners, it’s easy to be daunted by the vast variety and habits of Maine’s birds, especially beyond the feeder. But learning birds is easier than it looks. How easy? Tune in next week.