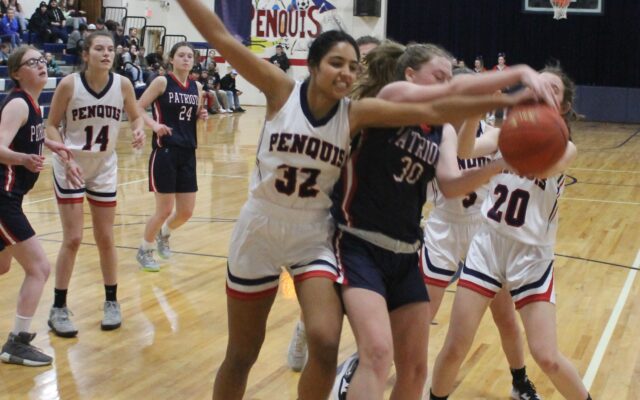 The first quarter eight overall quarters of play ended with the Penquis girls ahead 5-2, but the host Patriots would score 11 points in the second quarter to lead 16-6 at the half.

Penquis freshman Brooklyn Decker scored a game-high nine points off the bench as seven Patriots got on the scoring sheet. Decker had a field goal from the low post in the first quarter and paced her team with five points in the second, on another shot from the post, putting an offensive rebound back up and off the glass, and making a free throw.

Senior Rachel Broussard was right behind Decker with eight points. She picked up half of these on a pair of third quarter field goals to go along with two other shots from the low post made in each quarter of the first half. Broussard helped Penquis go up 25-8 after the third to set up the 31-17 final score.

The Milo-based Patriots improved to 4-5 and won for the third time in four games, a run starting with a 30-15 win at Bangor Christian at the Eastern Maine Sports Academy in Veazie on Dec. 27.

Penquis won at Lee Academy 42-24 on Tuesday evening to improve to 5-5, and earn the team’s fourth victory in the last five contests.

The Bangor Christian boys jumped out to a 16-0 lead in Milo during the first quarter to start the team’s 53-31 victory. The visitors improved to 6-1 with a fifth consecutive win, a run that includes a 63-39 home victory over Penquis on Dec. 27.

Bangor Christian junior Jaleen Reed had 11 points in the first quarter, including three shots from behind the 3-point line, as part of his game-high 26-point night. Reed accounted for just about half of the Bangor Christian scoring, as six other players combined for the other 27 points with no one else having more than eight.

Penquis senior LJ Shaw put the home team on the scoreboard with a layup in the last minute of the first quarter to end the 16-2 Bangor Christian run. Shaw led the host Patriots (the squad fell to 3-3 after having won three of its last four with the lone loss coming at Bangor Christian) with nine points.

The score was 25-6 at the half, but Penquis would score 16 points in the third quarter. Sophomore Brenan Grant made three layups for six of his team’s points in this 8-minute session, and Grant would finish second in scoring for his team. Shaw sank two shots, and three other field goals from as many players gave the home team a 16-15 scoring advantage in the third.