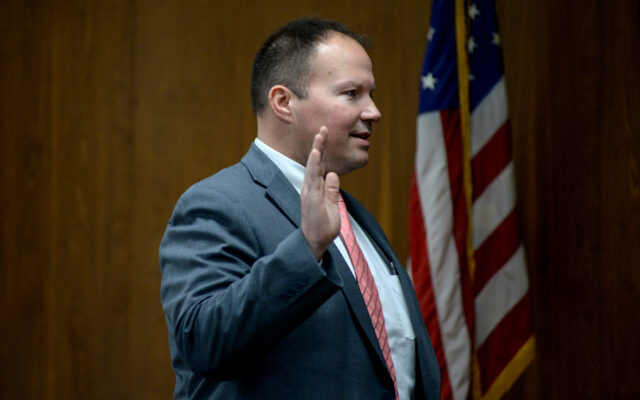 Zachary Brandmeir is the first independent to serve as a Penobscot County Probate Court judge.

But his swearing-in ceremony Jan. 4 at the Historic Penobscot County Courthouse was about family, not politics.

Not only did Brandmeir’s wife, Stephanie Brandmeir, 41, and his children, Alban, 9, and Lily, 6, attend, but his parents, in-laws, friends and other relatives filled the courtroom on the first floor of the historic county courthouse on Hammond Street.

As Brandmeir, 41, was sworn in, Brandi, the unofficial probate court therapy dog, calmly greeted each visitor and stole the limelight from the new judge. A 9-year-old whippet mix with one blue and one brown eye, Brandi has been known to ease the stress for people, especially children, attending Probate Court proceedings.

Brandmeir’s children were especially attentive to the dog, owned by Registrar of Probate Renee Stupak of Bangor.

Maine’s probate courts handle name changes, adoptions, guardianship matters and estates. Probate judges are the only elected judges in Maine. In Penobscot County and most others in Maine, the position is part time. Brandmeir will be paid $47,000 and preside on Tuesdays and Thursdays. He will prepare for court on other days while maintaining his private law practice in Bangor.

Brandmeir replaces Amy Faircloth, 62, of Bangor, who was appointed a District Court judge last year by Gov. Janet Mills. Under Maine law, she could not hold both positions, so she resigned as probate judge in early summer.

Edmond J. Bearor, 63, of Bangor was appointed to fill out Fairfield’s unexpired term but chose not to run for the position.

Brandmeir, whose judicial robe had not yet arrived Jan. 4, said he ran for office because he felt he’s well suited for the job, and voters agreed.

“I’m very grateful to the voters of Penobscot County for giving me this opportunity to serve the community,” the new probate judge said. “I learned about the vacancy, and decided to run for it because I believe my qualifications are well-suited for the job.

“Some of my best moments as an attorney have been watching the faces of family members and children during adoptions,” he said. “Also, I believe my litigation experience and temperament will be helpful in the courtroom.”

Brandmeir is young enough that he could match Republican Allan Woodcock Jr.’s record of 50 years as a probate judge. Woodcock, who died in April 2016 at the age of 95, was Maine’s longest serving probate judge. He retired from the Penobscot County post on Jan. 1, 2013.

Republican M. Ray Bradford Jr., now 76 of Bangor, was appointed the next month by former Gov. Paul LePage to serve out Woodcock’s unexpired term. Bradford then beat Faircloth, a Democrat, for the job in 2014 by about 2,200 votes. Bradford did not seek reelection, and Faircloth won the position in 2018 without opposition.

After law school, Brandmeir opened his own office in Bangor. Most recently his practice has focused on family law, but in the fall of 2017, he was co-counsel with Bangor lawyer Hunter Tzovarras in the high-profile murder trial of Robert Burton, now 45, of Abbot. Before his arrest, Burton led the police on a 68-day manhunt, the longest in state history, after his girlfriend’s body was found in her bedroom in Parkman on June 5, 2015. He turned himself in at the Piscataquis County Jail on Aug. 11, 2015.

Burton took the stand in his own defense and claimed that he shot Stephanie Ginn Gebo, 37, of Parkman in the back as they wrestled for her gun after she had shot him.

A jury found Burton guilty of murder on Oct. 5, 2017, after deliberating for about 6½ hours over two days. He is serving a 55-year sentence at the Maine State Prison in Warren.