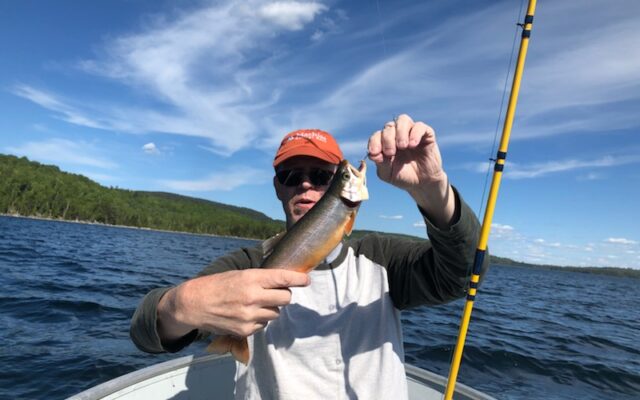 Contributed • January 6, 2023
By Bob Mallard I recently read an update from Maine Department of Inland Fisheries and Wildlife in regard to the status of Bald Mountain Pond in northeast Somerset County, home to rare Arctic charr. Unfortunately, the native charr are collapsing under the weight of nonnative smelt and lake trout introductions.

I recently read an update from Maine Department of Inland Fisheries and Wildlife in regard to the status of Bald Mountain Pond in northeast Somerset County, home to rare Arctic charr. Unfortunately, the native charr are collapsing under the weight of nonnative smelt and lake trout introductions.

Smelt compete with Arctic charr for food and space, and they prey on them as well. They have been blamed for the loss of charr in a number of waters, including the recently reclaimed Big Reed and Wadleigh ponds. Along with nonnative landlocked salmon, smelt are said to have caused the loss of the charr of Rangeley.

Lake trout also compete with Arctic charr for food and space, and their impact in regard to predation is higher due to their size and piscivorous tendencies. Lake trout can also hybridize with Arctic charr, and have been blamed for the demise of charr in New Hampshire and Vermont.

What we are experiencing at Bald Mountain Pond is the worst possible scenario.

One thing that jumped out in the status update was a proposal to move the Bald Mountain Pond charr to a surrogate water to try to save them. While this sounds logical on the face, it raises many questions. First is, what are we saving? Unless there is a plan to reclaim Bald Mountain Pond, which there currently is not, this would be a permanent relocation.

“Translocation waters [for BMP charr] will be identified based on water quality, physical characteristics and past experiences. Maine State Heritage Fish waters offer the most suitable habitat and may be the focus of rule changes to utilize these waters for translocation of charr from BMP,” DIF&W said.

How long will the Arctic charr be in their new home before they are no longer Bald Mountain Pond fish? The genetic differences between Maine Arctic charr populations is minimal, and does not warrant subspecies or even strain designation. What we really have is adaptations to specific conditions. Change the conditions and the fish will adapt to them, or not.

And while the statement that our State Heritage Fish waters offer the “most suitable habitat” looks good on paper, in practice this is not necessarily the case. It would also require Legislative approval to do so, which would further erode this critically important wild native fish program.

Maine has attempted to introduce Arctic charr to roughly 15 waters. Thirteen of these attempts failed, and one, Enchanted Pond, has been marginally successful at best. Attempts to reintroduce charr to Rangeley Lake failed as well. Neighboring New Hampshire hasn’t fared any better, failing in 15 of 15 introductions, and two of two reintroductions.

The only success in Maine in introducing Arctic charr is Long Pond in Township E near Rangeley. Long Pond is a stocked brook trout water, and has been stocked annually since 1952. It is also home to nonnative smelt, showing that while introducing nonnative smelt over native charr is a problem, when both are introduced it may not be.

Arctic charr are more like lake trout than they are brook trout when it comes to habitat. They prefer deep, cold water, and rarely if ever enter moving water. You could argue that charr are closer to splake in this regard than brook trout, the primary species found in most State Heritage Fish waters.

Would it not be prudent, and less risky and disruptive, to use stocked waters as surrogates rather than State Heritage Fish waters? Holbrook Pond in Piscataquis County comes to mind. It is a stocked splake water with a maximum depth of 80 feet and an average depth of 44 feet. Many other stocked waters could be considered as well.