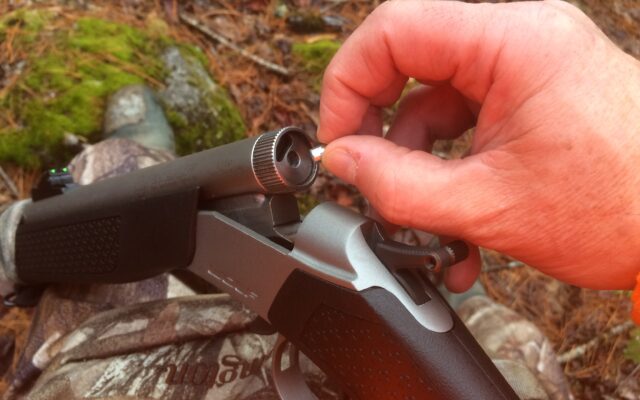 If you don’t have your deer yet, give muzzleloader hunting a try

Contributed • November 29, 2022
By Pete Warner, Bangor Daily News Staff Regular firearms season ended Saturday — after what has already been a record harvest of white-tails — but those who still haven’t filled their tags can continue their efforts during the muzzleloader season. A muzzleloader is a more traditional style of firearm that must be loaded by first placing an explosive charge, then a projectile, directly into the barrel.

Regular firearms season ended Saturday — after what has already been a record harvest of white-tails — but those who still haven’t filled their tags can continue their efforts during the muzzleloader season.

A muzzleloader is a more traditional style of firearm that must be loaded by first placing an explosive charge, then a projectile, directly into the barrel.

Firing a muzzleloader requires a primer or percussion cap, which creates enough spark when struck by the firing pin to ignite the loose gunpowder or powder pellets and shoot the projectile out of the barrel.

Muzzleloaders, which can fire a 50-caliber slug or ball, can be deadly even from a long distance with good aim.

Modern inline muzzleloaders are much more convenient than their predecessors, such as the flintlock-style guns. Break-barrel models enable hunters to easily insert a primer to make the gun “live,” or to unscrew the breech plug in order to clean the barrel.

Newer styles are also relatively light and easy to handle.

The most significant challenge for a muzzleloader hunter is the reality of the one-and-done dynamic. Once the gun has been fired, it requires the hunter to remove the ramrod, reload the powder and projectile, then insert another primer.

Even someone who is accustomed to using a bolt-action or single-shot rifle during firearms season will realize that it’s going to require an unobstructed view of a deer and, as always, a good shot to avoid the need for a second shot.

Even with practice, it takes most hunters a solid 20 to 30 seconds to complete the reloading process.

There are also fewer hunters in the woods during muzzleloader season. For most of us, that should mean significantly reduced pressure on the deer, which will be feeding to bulk up for the onset of winter.

There also will be some late rutting activity among bucks, which will be trying to chase down the remaining unbred does.

Sometimes, hunting in December gives hunters a chance to pursue deer by tracking them in the snow, although there isn’t much of that kind of precipitation in the upcoming forecast.

The muzzleloader deer harvest is only a fraction of the annual total — 4 percent in 2021, a total of 1,595 deer during the final gun season.

Hunters also are reminded that unlike during regular firearms season, during legal hunting hours, a handgun may not be used to dispatch a deer that has been shot with a muzzleloader.

And, state law also requires that hunters wear two articles of blaze orange clothing, including a solid-color hat and one that covers a major portion of the torso.

If muzzleloading isn’t your thing, the expanded archery deer season continues through Saturday, Dec. 10. That does not include crossbows.

Or if game bird hunting is more your style, don’t forget that the season on upland and migratory birds, including ruffed grouse and woodcock, remains open until Dec. 31.