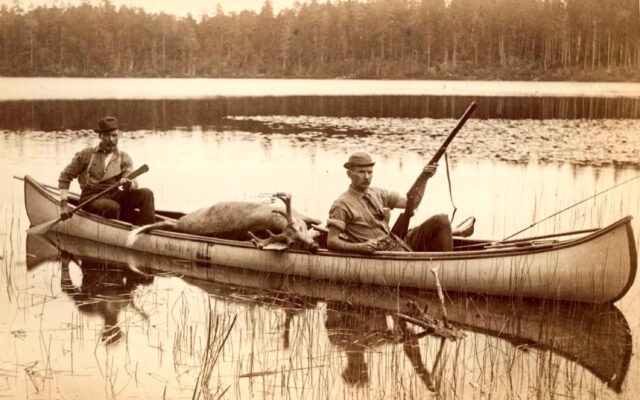 Got your deer yet? These historic Maine hunters did

PORTLAND — It’s an age-old question still uttered over many a Thanksgiving feast this week.

Got your deer yet?

“No” is the usual answer. These days, only 15 to 17 percent of Maine hunters get their buck or doe. Even so, last year’s hunt was historically good. Across the regular firearms, archery and muzzleloader seasons, hunters bagged nearly 39,000 deer, the biggest haul since 1968.

We won’t know this year’s totals until sometime in December. But with the firearms season for deer ending on Saturday, let’s take a look back at the evolution of Maine’s hunting laws through a series of pictures preserved by historic institutions around the state.

Maine has long been marketed to folks from away as a deer and moose hunting paradise. However, from 1853 until 1870, it was illegal for anyone but Mainers to hunt here.

The state established its inaugural hunting laws in 1830, a decade after becoming a state, setting the moose and deer hunting seasons as Sept. 1 through Dec. 31. No bag limits were set. This allowed some unscrupulous hunters to kill scores of deer, moose and caribou, shipping them out of state for profitable sale.

In the late 1800s, Maine still had a healthy herd of woodland caribou, but they were often slaughtered by commercial hunters who sent the meat to big-city restaurants. The animals were easy targets.

“Caribou would gather in large herds on the big lakes of northern Maine during the winter,” wrote recently retired Allagash Wilderness Waterway Superintendent Matthew LaRoche. “When shot at, the herd would not run away but would often circle around and around until the whole herd had been devastated.”

Thus, the caribou all were gone by the 20th century. LaRoche points out that famed sportswoman and guide Fly Rod Crosiby is said to have shot the last legally hunted caribou in Maine. Efforts to reestablish the state’s herd were made in the 1960s and 1990s. Both schemes were miserable failures.

The practice of killing moose primarily for their hides, leaving most of the meat behind, was also popular in the mid-19th century. Due to overhunting, Maine’s moose population had fallen to just a few thousand by the dawn of the 20th century.

But the late 1800s also saw the beginnings of Maine’s homegrown conservation movement. Hunters began to realize if they didn’t start setting reasonable bag limits, the sport they loved would be gone for good. Laws passed in 1883 banned Sunday hunting, restricted hunting with dogs and set hunting season dates between Oct. 1 and Jan. 1. Bag limits of one moose, two caribou and three deer were also set.

In 1893, the Maine Sportsmen’s Fish and Game Association was established. Three years later, J. F. Sprague, a member of the organization from Monson, laid out his view of ethical hunting.

“We would not kill any of God’s mute creatures unnecessarily; we would not kill a deer or a trout except in open season and then only by the methods of the true sportsman, who always gives the game, the trout or the salmon all of their natural advantages in the fight,” he said.

An 1891 law prohibited killing cow and calf moose. It was repealed two years later — and reinstated again two years after that. Lawmakers continued to try to preserve the dwindling moose herd. They shortened the hunting season, then eliminated it altogether in 1915.

Hunting dates and limits have changed frequently over the years, too. Maine first tried to implement hunting license regulations in 1899. That year, residents could buy a $4 license ($6 for out-of-staters) that allowed them to kill one deer in the month of September, before the regular season began. But the scheme was unpopular and swiftly abandoned.

In 1916, hunting from new-fangled automobiles was outlawed. Hunting and fishing licenses were established for good in 1917. Fees helped the Maine Warden Service expand.

Nowadays, deer season generally runs the month of November, into the first week of December. Bears are hunted in September and moose in October. Local and from-away hunters still flock to this northeast corner of the country, looking for game.

“Maine is the mecca at whose mossy and verdant shrines millions of earth-worn pilgrims and toilers worship and receive the holy blessings of Nature in rest and invigorating recreation,” he said. “The moose and the deer are their allies and ours and must be preserved.”