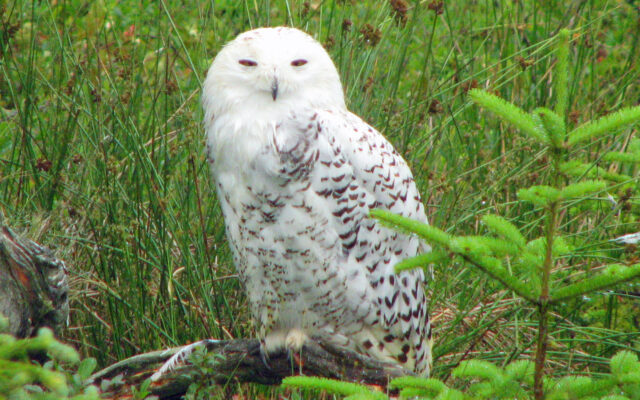 Contributed • November 28, 2022
By Julia Bayly, Bangor Daily News Staff If there is one thing snowy owls spending the winter in Maine don’t need, it’s paparazzi. That’s because too much attention from people taking their photos stresses the owls out and poses a real threat to their health.

If there is one thing snowy owls spending the winter in Maine don’t need, it’s paparazzi. That’s because too much attention from people taking their photos stresses the owls out and poses a real threat to their health.

It’s not that wild bird experts like Doug Hitchcox don’t want people to photograph snowy owls. Rather, the naturalist at Maine Audubon wants people to use common sense when doing so.

Lack of common sense, or people ignoring some simple birding guidelines, has prompted some social media groups devoted to wildlife and birding — including the Maine Wildlife Facebook group — to ban any posting of snowy owls in an effort to protect them.

Elsewhere in the country, similar action was taken by Chicago Audubon Society with its Facebook page.

Snowy owls are a fairly rare sight in Maine. They’re seen just during the winter, and only at select locations. They are a striking sight with snow white feathers and bright yellow eyes. So naturally, these birds are sought after by birding enthusiasts and wildlife photographers.

And therein lies the problem.

Hitchcox said snowy owls, unlike other owls, are more active in early morning or early evening daylight hours. They like to roost and sleep in open spaces during the day, much like they do in the arctic on the tundra, making them easy to spot in Maine, he said.

“Everyone seems to want the flight shot, which you won’t get when it’s roosting, or the portrait shot so they are way too close,” Hitchcox said. “I have definitely seen over the years photos of [snowy owls] that were taken so close to the owl it caused the bird to wake up and fly off, expending valuable energy it needs to survive the winter.”

Because the owls often watch people as they approach, it allows for that portrait shot so many photographers want, Hitchcox said. Doing something to make the bird take off then produces the sought-after in-flight photo.

That’s why social media groups have started to refuse posting snowy owl photos in general, to discourage that sort of paparazzi-like behavior on the part of photographers.

In the post announcing the no snowy owls photographs rule, Maine Wildlife Facebook group administrators noted they are trying to protect the owls from people who refuse to respect nature.

“It took [the owls] time to fly here and they expend a lot of energy hunting,” according to the post. “With people constantly chasing [and] harassing them, they are not allowing them to hunt [and] eat which will lead to starvation.”

Snowy owls travel far to the south out of their home range during the winter when their population numbers in the arctic have exploded, according to Hitchox. It’s a winter migration known as an “irruption.”

Ongoing observations by a group of scientists studying the winter ecology of snowy owls with Project Snowstorm have shown the birds arriving in Maine in good health.

”But just because they are in good condition does not mean we want to make them in bad condition by flushing them out,” Hitchcox said.

There is nothing inherently bad about photographing snowy owls, or any wildlife, as long as the photographer puts the birds and animals first, Hitchox said.

“The biggest thing I tell people is if the bird is looking at you, you are too close,” he said. “If it’s looking at you, that means it is aware of your presence and is saying to itself, ‘Oh jeez, there’s a photographer and I will sit here and conserve my energy unless it becomes a threat.’”

Some photographers take that sitting still as an invitation to move even close, at which point the snowy owl will perceive them as a threat and then fly off.

“At Audubon we know snowy owls are an amazing bird and seeing one can literally be a life changing experience for some people and we really don’t want to be the gatekeepers for that,” Hitchcox said. “We just want people to remember that when the snowy owls are down here, they are just trying to survive the winter until they go back north to the arctic to breed.”