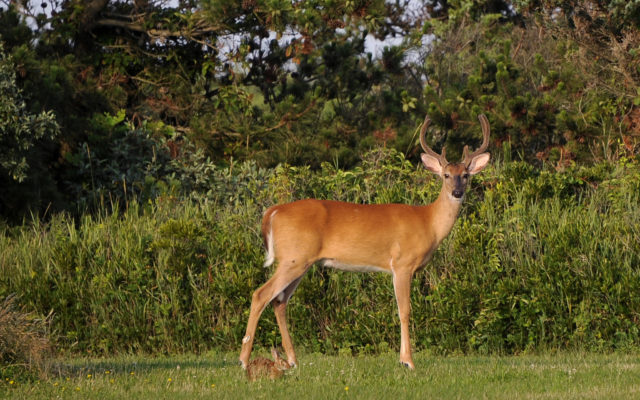 What happens when 2 hunters shoot the same deer?

Contributed • November 27, 2022
By Pete Warner, Bangor Daily News Staff I have a friend who visits Aroostook County for an annual deer hunting trip with family and friends. Several years ago, he and another hunter came upon a deer in a clearing.

I have a friend who visits Aroostook County for an annual deer hunting trip with family and friends.

Several years ago, he and another hunter came upon a deer in a clearing. It appeared to be injured, but my friend shot it.

Coming upon the deer, the hunters could see that it had been shot previously. A short time later, an older hunter emerged from the treeline.

The man explained that he had shot the deer and had been tracking it through the woods for a long time. The second hunter graciously allowed the first shooter to tag the deer.

But whose deer was it?

“The person that kills that big-game animal — deer, bear, moose — is the one that registers it,” said Maine Warden Service Lt. Aaron Cross. “That’s kind of cut and dry.”

Under Maine law, the hunter who fires the lethal shot is responsible for the animal, Cross said.

Competing hunters in Maine can sometimes shoot the same deer. Despite having a law to address these situations, they are not always resolved easily when both hunters stake a claim to the animal.

Every hunting scenario is unique, and Cross said that in such a case a game warden would take all the information about two hunters shooting the same deer into consideration to make a determination.

“In the field, we try to work with hunters when there is any kind of a dispute with a deer where two people shoot at it,” Cross said. “We try to look at who fired the lethal shot.”

The bottom line is, if the deer was alive when the second hunter shot and killed it, that person is considered to have fired the lethal shot.

However, that can result in hard feelings between two hunters if both believe they are entitled to tag the deer. There are examples of hunters who hit a deer in such a way that likely would eventually have caused its death.

But if the animal is alive when another hunter sees and shoots it, that argument does not hold water.

Cross said it is rare, in his experience, that neither the hunters nor the wardens can determine with certainty who actually fired the lethal shot.

“That could be a potential issue where neither of them are going to get it,” Cross said.

Hunters can minimize those conflicts and improve safety by reaching out to landowners to ask permission to hunt, whether it’s posted or not, or to inform them where they plan to be on the property.

“Sometimes you learn a lot of information, safety-wise, through that conversation,” Cross said.

Of course, having experience using firearms and taking the time to make good shots on deer will improve a hunter’s chance of a quick, clean harvest.