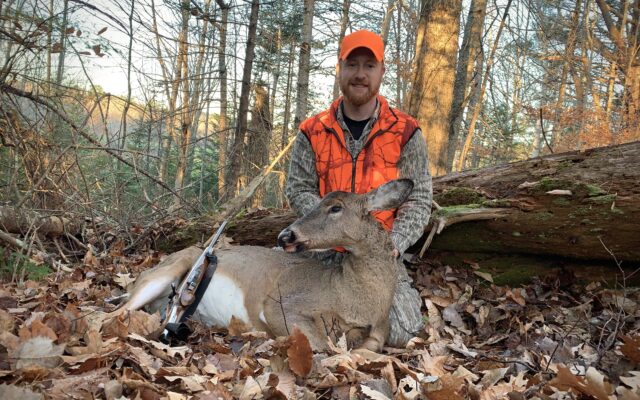 It’s been a while since I’ve killed a doe.

I was 16, and she was my first bow kill. After that, I fell into a “bucks only” mindset. Through the years, I’ve taken a number of bucks — including a couple over 200 pounds — but recently, on a cool November morning, I felt like a kid again while belly crawling more than 200 yards to get within range of a long-nosed, beautiful ol’ girl as she fed by herself at the edge of a field.

A mere 60 yards separated me from a familiar target on unfamiliar ground, and I prepared myself for what I’d come there to do.

This September, the Maine Department of Inland Fisheries and Wildlife posted the results of their newly revised antlerless deer permit lottery system. The new system reduced permits from the previous year by roughly 37 percent (153,910 to 96,340), meaning fewer permits were available in the lottery, but those lucky enough to be drawn would be afforded an opportunity to kill both an antlerless deer in the awarded WMD as well as an antlered deer statewide.

This deviated from the previous system, which allowed hunters with an antlerless permit to shoot only one deer, whether antlerless or antlered. There were other situations in specific WMDs that provided additional opportunities for multiple antlerless harvests by way of a “bonus” permit system and expanded archery seasons, which still exist, with separate bag limits.

But throughout the majority of the state, a hunter was generally allowed only one deer.

The system was and continues to be highly scrutinized by many in the hunting community, but DIF&W’s intentions are well placed, targeting an increase in antlerless deer harvest. Incentive has been added to those awarded a permit by allowing them to kill an antlerless deer and continue hunting for an antlered deer.

Traditionally, a very small percentage of antlerless permits are filled each year, as most hunters prefer to try to kill a buck and choose not to end their season by tagging an antlerless deer. The thought is that a smaller group of incentivized permit holders will harvest more antlerless deer, meeting the state’s goals for better deer herd management.

I’m inclined to agree with DIF&W’s hypothesis, and it will be interesting to see how this year’s numbers shake out.

We selfishly tend to think of the antlerless deer permit lottery as being for us hunters, when in truth, it’s nothing more than a management tool to help the state’s deer herd maintain its health and sustainability. That being said, was I disappointed when neither I nor my girlfriend, Emily, drew a WMD 26 permit? I sure was, but I understood the reasoning and looked forward to the second stage of the new permit system — the first come, first serve online sale of unclaimed or excess leftover permits, scheduled for Oct. 5. After a technical malfunction with the state’s website, DIF&W fixed the issue and brought the system back to life on Oct. 11.

Once again, Emily and I missed the boat for WMD 26 permits, as they had sold out just minutes before we were allowed to purchase. We were frustrated, especially after learning that our competition in “line” included those who had already been awarded a permit in the lottery.

We settled on the next best geographical option, two WMD 23 permits.

Emily’s father, Rick, knew of a landowner in the town of Brooks, 45 minutes from our home and in WMD 23, who he thought would likely let us hunt. Rick has hayed the property for years and knew it to be thick with deer. I called the landowner, Steve, and we met days later at his beautiful property, a former dairy farm with several fields, barns and buildings. I spent the next couple hours with Steve, enjoying conversation, trading stories and following him as we walked the area he was allowing us to hunt. It was clear to me that Steve loved every square inch of his land, was both prideful and protective of it and that we would be lucky to hunt there. I told Steve that we would not target fawns or does with fawns, an idea it was clear he both agreed with and appreciated.

I prefer to hunt close to home, so the 45-minute drive in the early morning hours seemed foreign to me. After making the trip for a second day in a row — and after passing up a small button buck the previous day — I snuck my way down the edge of the field at first light, glassing as I went.

In short order, I saw a doe and fawn feeding halfway down. Using the contour of the field as cover, on my stomach, I bypassed them to gain a view of the bottom corner and spied her, a lone doe. I’d like to say I wasn’t nervous, but lying prone in the cold grass, I fought hard to get my breathing under control and settle the crosshairs behind her shoulder. At the shot, she jumped, kicked, then dug her way out of the field, making it just a few yards into the woods before she died under a blowdown.

The state’s new antlerless deer permit system isn’t perfect, but then again, perfection is an abstract concept. While I understand the frustration of many and share in some of it, if not for the new system this season, I wouldn’t have met Steve, wouldn’t have had the opportunity to enjoy his property, the morning, the doe, the meat or the memories.