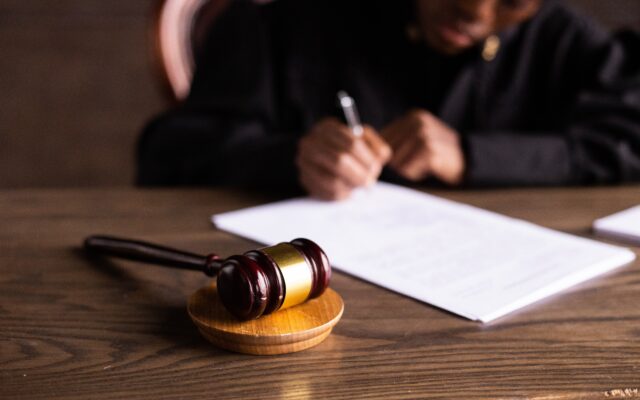 Contributed • November 12, 2022
By Samantha Hogan, Maine Monitor Maine’s top judge on Wednesday said the state’s justice system is failing people in the criminal and civil courts and implored lawyers to assist in the defense of the state’s poor.  Chief Justice Valerie Stanfill and the director of indigent public defense, Justin Andrus, laid out an increasingly dire situation in Maine’s courts in a presentation to nearly 100 lawyers Wednesday at a meeting of the Maine State Bar Association.

Maine’s top judge on Wednesday said the state’s justice system is failing people in the criminal and civil courts and implored lawyers to assist in the defense of the state’s poor.

Chief Justice Valerie Stanfill and the director of indigent public defense, Justin Andrus, laid out an increasingly dire situation in Maine’s courts in a presentation to nearly 100 lawyers Wednesday at a meeting of the Maine State Bar Association. They asked lawyers to take cases and fill the gaps in representation until the state increases funding for the judicial branch and court-appointed lawyers.

“I have not been soft-pedaling any messages. We are failing,” Stanfill said. “We are failing in this state in our justice systems — criminal and civil, to be honest.”

The first questions Stanfill said she is asked in conversations with lawmakers are about the availability of lawyers and the backlog of open cases in the courts.

A partial shutdown of criminal court proceedings because of the COVID-19 pandemic has created a crushing backlog of unresolved cases in the state’s courts. The problem has been compounded by the lack of lawyers willing to represent indigent clients. Court clerks across the state are increasingly reporting that they cannot find available attorneys to represent criminal defendants who cannot afford to hire their own. Some people are going days or weeks without an assigned attorney, The Maine Monitor reported.

Maine is the only state in the nation that does not have public defenders, though that will soon change with five public defenders expected to start work before the end of the year. Maine has relied for decades entirely on private attorneys who voluntarily contract with the state to represent adults and children in criminal cases and some civil matters who cannot afford to hire their own lawyer.

Frank Bishop, president of the bar association, said the shortage of defense lawyers for the state’s poor is a political problem that should be resolved by the governor and state lawmakers.

Gov. Janet Mills, a Democrat, was reelected for a second term on Tuesday. In the past, she has not initially supported requests to substantially increase the state’s budget for court-appointed lawyers. The bar association plans to renew its push with state lawmakers on the joint Judiciary Committee for the state Legislature to either convene a special session in the next six weeks to increase indigent defense spending or immediately address it in January, Bishop said.

Lawyers familiar with the system point to two potential solutions: immediately adding $13.3 million to the budget to raise the reimbursement rate for lawyers from $80 to $150 an hour or transition to a county, trial-level public defender system supplemented with private court-appointed lawyers.

“If the lawyers don’t make a big deal about this, then the Legislature is not going to take it serious,” Bishop told the group.

The true cost of providing indigent legal services has never been shown to lawmakers, Stanfill said.

“This is a state that has chronically underfunded these systems and calling on the bar to do even more is not going to solve the problem, but we are asking for the assist,” Stanfill said to the group.

Maine has 3,830 active resident lawyers, according to the Board of Overseers of the Bar. Many lawyers don’t do courtroom litigation or practice criminal law.

“What we’re talking about here is really just an assist. It’s not a solution,” Stanfill said. “We are a little desperate to get help everywhere we can get it.”

The bar is holding two training events before the end of the year to help lawyers meet the basic requirements to be eligible to accept court appointments. To work on complex cases — such as homicides, sex offenses, violent felonies, drunken driving and cases involving juveniles — lawyers will have to demonstrate additional skills.

Tina Nadeau, a Portland attorney who accepts court-appointments, wrote in an email after the meeting that a day-long training for litigators who are not currently focused on criminal law “is highly problematic and will not close the gap between the need for more highly-qualified practitioners.”

Nadeau said the focus of the indigent legal services commission should be to attract experienced lawyers who are focused on criminal law back into taking court-appointed cases.

The goal is to build capacity and to fill the gaps until lawmakers pass a systemic solution, Andrus said.

“The solution ultimately has to come from the rest of government,” Andrus said.

This story was originally published by The Maine Monitor, a nonprofit and nonpartisan news organization. To get regular coverage from the Monitor, sign up for a free Monitor newsletter here.