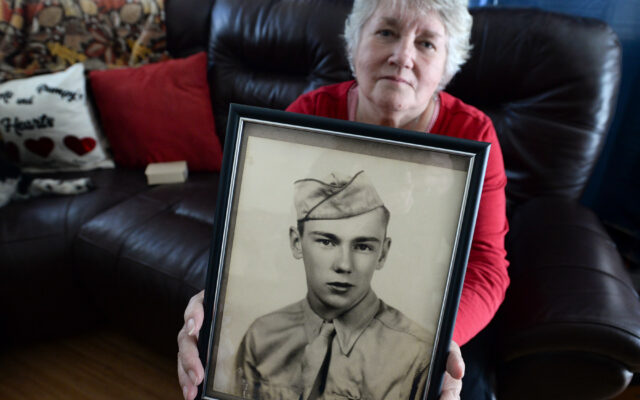 An 18-year-old from Milo was killed in WWII, but some family members didn’t find out until decades later

Clayton Taylor stepped onto a U.S. B-24 Liberator bomber at Pantanella Airfield in Cerignola, Italy, on Dec. 29, 1944, for a bombing run during World War II.

The 18-year-old from Milo was part of a 10-man crew on the plane nicknamed the Bonnie Annie Laurie. The plane departed the airfield that late December day to target the Porta-Nuova Marshalling Yards in Verona, Italy. On its way back, it plummeted into the Adriatic Sea.

Two crew members survived. Taylor, a gunner who had enlisted less than a year before, wasn’t among them. Years later, it turned out, one of those survivors would be key to helping Taylor’s family understand what happened to him.

Taylor’s story has largely gone untold until now. In fact, even members of his extended family weren’t aware of it for some time. Wanda Lincoln — whose husband’s brother was married to Taylor’s sister — had never heard Taylor’s name or seen a picture of him until after her brother-in-law and sister-in-law died about 15 years ago.

Lincoln was going through their belongings when she found a letter in a stack of papers that described Taylor’s death. And scattered throughout the home Lincoln found photographs of Taylor from his time in the Army, his senior portrait, fliers and pamphlets from the Liberator Club, and Taylor’s Air Medal and Purple Heart, both of which were given to his family after he was declared dead.

More than a decade after these discoveries, Lincoln said she wanted to share Taylor’s story to keep his memory alive. She felt the time was right to tell his story and memorialize him in Maine history, she said this week as she dug around a box of Taylor’s belongings in her Old Town home.

In a 1968 letter sent to Taylor’s sister, June, one of the crash’s survivors, James S. Smith Jr. — the radio operator on that fateful flight — recounted the events that led up to Taylor’s last few moments alive.

Just above its bombing target, the plane encountered heavy anti-aircraft fire,  but the crew at the time thought they had gone by unscathed, according to Smith’s letter and a declassified report from the Army. It wasn’t until the plane was flying over the Adriatic Sea on the way back to Pantanella Airfield that things went awry, Smith said.

The plane was flying 500 to 700 feet above the water in “soupy” conditions, Smith said in his letter. Then, the weather broke and the plane was angled to climb above the clouds to 1,200 feet, he said. That’s when something started smoking inside the cockpit, according to a statement from Robert B. Miller Jr., the other surviving crew member, included in the declassified Army report.

Seconds later, the plane began a dive toward the waters of the Adriatic Sea below.

Two life rafts came out of the plane after it hit the water, but only Miller and Smith were able to make it to them. The remaining crew members, including Taylor, were initially declared missing in action. Ultimately, they were declared dead, as none of them were found.

The crash was the crew’s third mission and was less than a year into Taylor’s enlistment.

“I can say with more authority than anyone else that your brother died for his country in a plane crash in the Adriatic as a result of damage from enemy action over Verona, Italy,” Smith said in his letter to June.

“When I read that letter, I got goose pimples,” Lincoln said. “You may be gone, Clayton, but you are not forgotten.”

Although Taylor’s remains were never found, there is a marker honoring him in the Sicily-Rome American Cemetery in Nettuno, Italy.

While Lincoln and her husband have been holding onto the last few remaining documents and memories of Taylor, she hopes that by sharing his story others who might have known Taylor can honor his memory, Lincoln said.

“I wish I had met him. My dad served in the Pacific Theater, and I know my dad would have liked to have known someone like this, too,” she said. “When you’re a vet, you’re a vet. This is just another one of our relatives who took up the gauntlet and served the country. And now we’ll be able to share his story.”