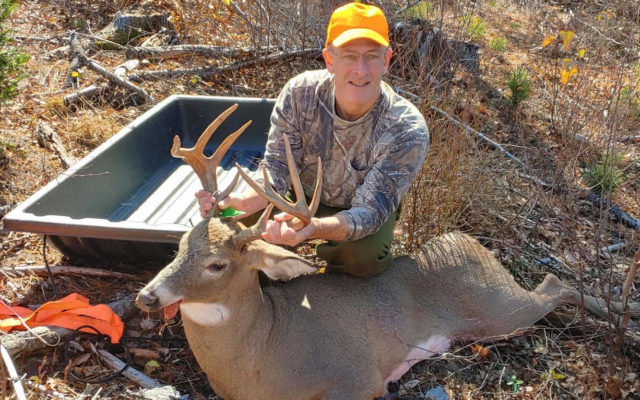 Contributed • November 9, 2022
By Pete Warner, Bangor Daily News Staff Pursuing a buck and an antlerless deer (with the appropriate permit) during the same season is a game-changer. I learned that on a recent hunting outing, during which I was shocked to lay eyes on four different deer in the same day.

Pursuing a buck and an antlerless deer (with the appropriate permit) during the same season is a game-changer.

I learned that on a recent hunting outing, during which I was shocked to lay eyes on four different deer in the same day. That’s unheard of in my personal experience but there is a great deal more optimism for success this season.

The state intensified its efforts to manage deer populations in several Wildlife Management Districts this year by revamping its antlerless permit system. Now if you have a “doe tag,” as many of us still call them, you have a chance to harvest two deer this year and shooting one isn’t going to prevent you from pursuing the other.

I was disappointed during a trip last week to have jumped a buck on my walk in, just after the start of legal shooting hours. But at least I had seen one.

Later in the day, as I made my way along a trail and back toward the car, I heard a deer blow at me from behind. It hadn’t seen me, but once the breeze started pushing my scent in that direction, its response was immediate.

Figuring that I had nothing to lose, I improvised a snort-wheeze of my own. And though it wasn’t a good one, the deer hung around.

I assumed that I had been busted by a doe, because bucks are more inclined to hightail it once they know you’re in the neighborhood. I figured that I didn’t have anything to lose, so I back-tracked slowly along the trail.

The deer kept blowing, so I kept walking. Three or four times, I again made an air-whooshing sound with my mouth, thinking I might confuse it long enough for me to get a look.

I knew it was slightly up the ridge, maybe 30 or 40 yards away, but there was sufficient growth to prevent me from seeing it. Eventually, I slung the rifle over my shoulder and grabbed my binoculars.

A tail! And attached to it, partially obscured, was a doe. In the past, I wouldn’t have given this deer a second thought. But with a doe permit in hand — and the guarantee that I could pursue a buck if I decided to shoot — I figured that I might as well see if I could consider a possible shot.

It didn’t happen. Daylight was fading and just as I began to contemplate taking action, the doe bounded up the ridge and out of sight.

It was the longest encounter I had ever experienced with a deer, hands down, and it was fun trying to make something happen.

Then, on my way up the road, two does stood silhouetted against the horizon. It was two minutes after legal hunting time, and they remained motionless, maybe 10 yards from my vehicle, checking me out.

I waited for a minute, allowing them to move on.

It was a promising outing that provided optimism for future hunts.

I had a similar experience again my next time out. This time, my son William and I had split up, heading to different areas.

Upon his arrival, he spotted a hunter right where he had hoped to set up. He headed back the way he had come and texted me about the change of plans.

While texting me, William jumped a doe. He hunkered down next to the road and waited, just in case. Again, he provided me with an update.

I headed back in that direction on a parallel trail uphill, hoping the doe might come through the woods and into sight.

In the meantime, the doe reemerged a short distance away, albeit only long enough for it to spot the waiting hunter. Again, she bounded into the woods.

I hung tight a couple of hundred yards away and made a few doe bleats, but never got a look at the deer. Nonetheless, it was fun.

Both examples point out the beauty of the state’s new system — provided you have an antlerless permit. In the past, especially during the first week of firearms season, I probably would have dismissed pursuing a doe, knowing that taking the shot would have ended my season.

Last year was a perfect example. I had a decent-sized doe at 20 yards, but chose not to shoot and have my season be over three days in.

Of course, I didn’t have another opportunity and my “insurance policy” doe tag went unfilled.

This season, there won’t be much hesitation if I get a similar chance. I’ll have meat in the freezer and still be able to pursue a buck.

It’s the best of both worlds.