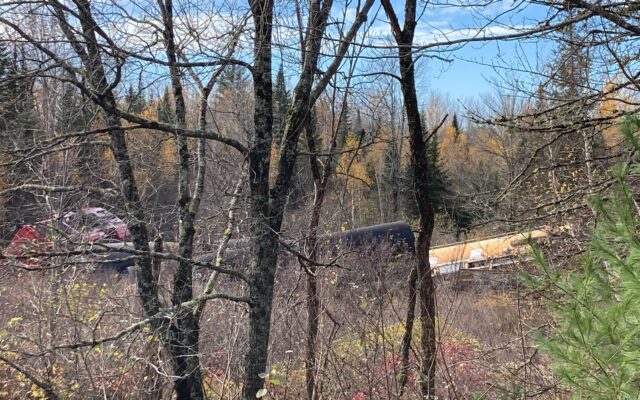 Valerie Royzman • October 19, 2022
A Canadian Pacific Railway train derailed in Orneville when it encountered a washout on the tracks long before daylight Wednesday, according to the Milo fire chief. Orneville is an unorganized township east of Milo in Piscataquis County.

A Canadian Pacific Railway train derailed in Orneville when it encountered a washout on the tracks long before daylight Wednesday, according to the Milo fire chief.

Orneville is an unorganized township east of Milo in Piscataquis County. The Milo Fire Department received a call about the derailed train at 4 a.m., but the crash occurred around 3:15 a.m., according to Canadian Pacific.

Three engines and six railcars were involved in the derailment, Milo fire Chief Donnie Richards said. None of the four crew members on board were injured, although they were taken to Mayo Regional Hospital to be examined.

Heavy equipment will be needed to lift the derailed train engines and cars, said Paul Merrill, spokesperson for the Maine Department of Transportation. The agency, which was notified at 5:30 a.m., is gathering information about the derailment, but it is not a state-owned track so it is only providing support.

Crews were clearing trees around noon Wednesday to build a road to get the heavy equipment to the crash site. Canadian Pacific has more equipment on the way as well, Richards said.

A small amount of diesel fuel from a locomotive spilled into a forested area near Dead Stream, but the Maine Department of Environmental Protection determined there was no threat, he said.

One of the train cars carried tar and another carbon dioxide.

“To the best of my knowledge, none of this is leaking at this time, but the DEP is here inspecting that,” Richards said.

The Maine Department of Environmental Protection doesn’t have serious concerns at this time, said Chris Hopper, division of response services director, Wednesday afternoon. The agency was in Orneville supporting Canadian Pacific as it assessed the situation.

The train was traveling south, although Richards did not know its destination.

Andy Cummings, manager of media relations for Canadian Pacific, confirmed Wednesday afternoon that the train crew is OK and that there’s no danger to the public from the crash. Canadian Pacific has teams at the crash site, looking into the details of what caused it.

Canadian Pacific plans to set up a command post in Orneville, which is standard, Hopper said.

The cleanup is expected to take about two days.