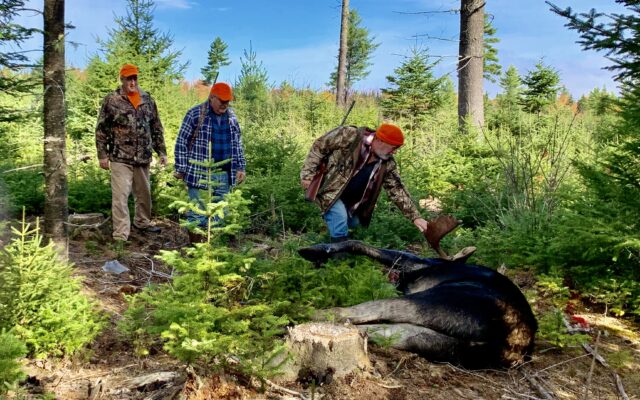 Contributed • September 21, 2022
By Pete Warner, Bangor Daily News Staff Moose hunters have long proclaimed that once the shot is taken, that’s when the real work begins. Moving a moose — which even field-dressed can weigh more than 1,000 pounds — along the ground over rocks, stumps and other obstacles is a painstaking process.

Moose hunters have long proclaimed that once the shot is taken, that’s when the real work begins.

Moving a moose — which even field-dressed can weigh more than 1,000 pounds — along the ground over rocks, stumps and other obstacles is a painstaking process.

And as the days get warmer, especially during the September bull hunt, the clock starts ticking as soon as the moose is down.

That’s why more Registered Maine Guides and do-it-yourself moose hunters are trying to make the recovery process easier. They have adopted the practice of caping and quartering the moose in the field and packing out the meat, head and antlers to ensure meat preservation.

The method requires only a sharp knife, a steady hand and some game bags to keep the meat clean. It can then be carried out and usually reaches the butcher more quickly than when using the conventional approach.

“That’s being used more and more,” said legendary Master Registered Maine Guide and moose expert Roger Lambert of Strong, co-author of “The Great Maine Moose Hunt.” “Most all the guides have done that or are learning to do that.”

A good-sized moose of 700 pounds can yield more than 300 pounds of meat. Lee Kantar, the moose biologist for the Maine Department of Inland Fisheries and Wildlife, said that’s why hunters should consider quartering their animals.

“I’m looking at the temperature, and I want high quality meat, and I’m doing everything in my favor to get that,” Kantar said. “I had my hunt. I had a great hunt. Now, it’s all about procuring meat for my family and being proud of that.”

Kantar, whose job is managing, protecting and promoting moose as a resource, is a keen observer of how hunters treat their harvested animals. He mans some of the busiest tagging stations such as Ashland, Fort Kent and Jackman, compiling data on moose size, age (via tooth extraction) and the number of winter ticks.

And while most hunters who present a moose for registration arrive with an animal that is properly field dressed and packed with ice, he has seen the worst of what can happen.

“I’m trying not to be too critical of people, but when it’s 70 degrees out and they just spent eight hours pulling this bull moose out, and there’s flies all over the place, and it stinks, what do you think my reaction should be to that?” Kantar said, citing signs of meat spoilage.

Traditionally, hunters in Maine have taken great pains to extract their moose in one piece after field dressing. They enjoy having it weighed and its antlers measured and to show off the moose to curious onlookers.

Such efforts are foreign to big-game hunters in the western U.S. and Alaska, Kantar noted. There, hunts often are in remote locations, which means the animals are always cut up and taken out in pieces.

OMM Outfitters in Eagle Lake is among the Maine guiding services that has embraced processing a moose in the field, regardless of whether it was shot in the road, in a nearby clearcut or a mile into the woods.

“Every animal comes out caped and quartered and it’s much better for the meat when you get that hide off an animal right away and the meat’s able to cool off,” said Nathan Theriault, the owner of OMM Outfitters.

Caping involves the precise removal of the hide from around the front legs, chest, shoulders and up around the head and antlers, specifically to preserve it for taxidermy work.

Quartering is cutting the moose into four main parts and includes the removal of the hide and the separation of the front legs and shoulders, and the rear legs and hips. The backstraps, tenderloins and ribs also are cut off and placed in game bags.

Theriault said OMM Outfitters adopted the policy initially to make sure guides, hunters and members of the hunting party were not placed in danger, noting that he years ago had a couple of close calls when equipment malfunctioned.

Experts concede that moose definitely can be taken out intact in a timely fashion, as has been done since Maine’s modern moose hunt was instituted in 1981. To accomplish that efficiently requires a knowledgeable hunting crew that is prepared with good equipment and techniques to safely get the animal to a waiting vehicle.

“If you’ve got a snatch block, line and some people who are game, you can usually wiggle a carcass up into a pickup truck, which is the ultimate, right?” Lambert said.

The amount of time needed to complete the extraction, especially when temperatures climb into the 60s and 70s, is critical for meat preservation. Moose have dark-colored hides that warm quickly in the sun, especially if they are transported in black bed liners and Jet Sleds.

“With a changing climate, it’s a warmer hunt than we’ve had in the past and a lot of people, because of lack of experience, don’t realize how quickly they need to get that meat cooled down,” Lambert said.

“It’s hard to cool the meat down with the hide on, so the gutless method (quartering) is really good,” he said. “You can get those pieces out, get the hide off and try to get the cooling going.”

Learning to quarter a moose may seem daunting, but there are numerous videos available on the subject, including some on the DIF&W website featuring guide Dave Hentosh of Smoldering Lake Outfitters.

Aside from meat preservation, other reasons hunters may want to consider quartering their moose is the need to venture farther off the beaten path and that much of Maine’s prime moose hunting habitat is in the North Maine Woods, where ATVs are not allowed.

“You’re looking for main food sources on long walks in woods, sometimes miles,” said Billy Walker of Walker’s Big Game Guide Service, “and when you shoot a moose that far back in woods, you really have no choice but to quarter a moose out.”

That means strapping parts of the moose on your back or placing the meat, head and required evidence of sex into a bed liner, sled, boat or other container to pull it out.

“You can do it relatively inexpensively,” said Theriault, who said spending $40 to $50 on game bags and $30 to $40 on a knife is a good investment.

“For under a hundred bucks, you’re self-sufficient,” he said.

Regardless of how hunters choose to get their moose out of the woods, they must be prepared. Experience or research, manpower and the right tools can help ensure that the animal arrives at the butcher with minimal exposure to heat and contaminants.

“You’re dealing with an animal that’s of great size, and having a knowledge of how to go about extracting that animal ahead of time is really important,” Theriault said.