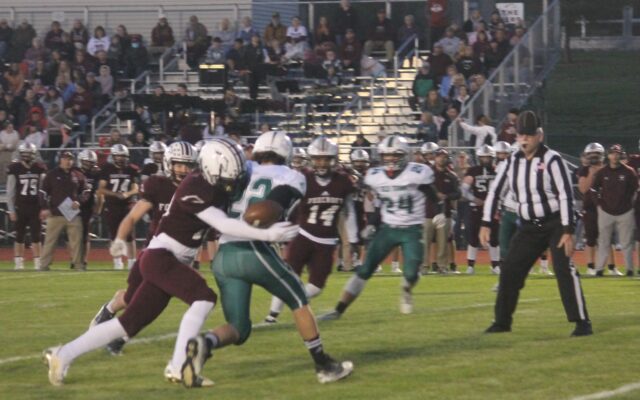 Stuart Hedstrom • September 19, 2022
DOVER-FOXCROFT — Foxcroft Academy showed no signs of rust following a bye in week two of the 2022 Class D football season. Two weeks after a 28-27 overtime victory at Winthrop High School, a rematch of the 2021 state championship, the Ponies cruised to victory over Class C North Old Town High School in the team’s home opener on Sept.

DOVER-FOXCROFT — Foxcroft Academy showed no signs of rust following a bye in week two of the 2022 Class D football season. Two weeks after a 28-27 overtime victory at Winthrop High School, a rematch of the 2021 state championship, the Ponies cruised to victory over Class C North Old Town High School in the team’s home opener on Sept. 16.

Foxcroft (2-0) jumped out to a 42-0 lead in the first quarter. The Ponies finished with 11 total touchdowns in a game shortened by the running clock rule, with five coming on the ground, two through the air, a pair on pick sixes, and another on a blocked punt as the bulk of the roster got onto Oakes Field and had a hand in the 74-points performance.

After Foxcroft opted to defer, the Pony defense forced a 3-and-out at the Coyote 21-yard line. Senior Caden Crocker caught the ensuing punt at the 45 and he brought it back for the touchdown as junior Kemsley Marsters kicked the PAT for what would turn out to be the winning point.

Another 3-and-out was followed by a very short punt and return to the Old Town-15. Junior quarterback Wyatt Rayfield connected with junior Jadon Richard in the flat and the receiver ran into the endzone with ease for touchdown No. 2 in just over 60 seconds of game action. Rayfield only threw two passes but both resulted in touchdowns as he and Crocker connected on a 44-yard scoring play in the second quarter.

The Foxcroft defense kept the opposition from getting beyond the sticks as on a 3rd-and-3 as Richard picked off a pass at the Old Town-26. He brought it back for the third Pony touchdown in less than the first 6:00, with Foxcroft leading 21-0 despite running only a single play on offense.

Richard would later score his team’s sixth touchdown of the opening quarter on a 65-yard run, to go along with his receiving touchdown and pick six. In the second quarter freshman Lucas Sands also brought an interception back, this one being 41 yards for a touchdown.

The offensive woes continued for Old Town (the team fell to 0-3). On the next series the Pony defense forced a punt with the football at the visitors’ 22. The Coyotes attempted a punt but Foxcroft senior DJ Scheel burst through the protection, got a hand up, and knocked the pigskin down. The football took a Foxcroft bounce as Scheel scooped it up at the 8-yard line and ran it in for the touchdown as the Pony special teams also got into the scoring action.

The offense would get onto the field with the next Old Town punt rolling out of bounds at the team’s own 41. On first down senior Cameron Chase got the handoff – his sole carry of the game – and he would not be tackled on a 41-yard touchdown run.

Foxcroft converted all six PAT kicks in the opening quarter with freshman Finn Holmes taking over for Marsters and he kicked the last two of these through the uprights.

With the outcome long decided — the Ponies were up 54-0 at the half — reserves and/or the second team offense got to see the field. Holmes had a 58-yard touchdown in the third quarter and freshman Aiden Harvey ran the ball in from seven yards out.

Landon Smith joined his classmates with touchdown runs in their first home high school game by scoring on a 58-yard run in the fourth. In only two carries Smith finished with a game-high 89 rushing yards.

Foxcroft is scheduled to host Lisbon High School at 7 p.m. on Friday, Sept. 23. The Greyhounds will come to Dover-Foxcroft at 1-2, having beaten Oak Hill High School 48-6 the previous Friday evening.