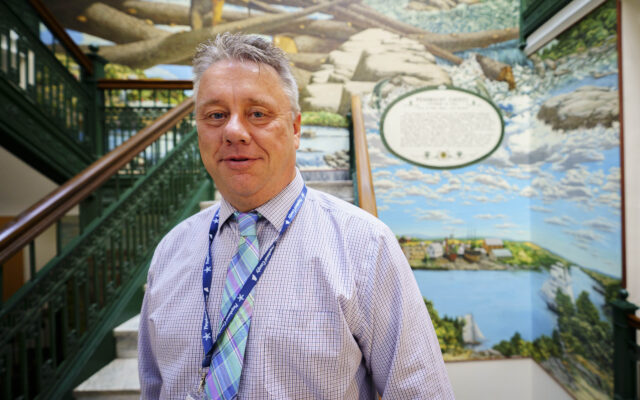 Contributed • September 19, 2022
By Judy Harrison, Bangor Daily News Staff Scott Adkins figured when he left his job as Hancock County administrator in June, he’d spend the remainder of his career in the private sector. Three months later, he’s a county administrator again, but in Penobscot County, where he worked as finance director for nine years.

Scott Adkins figured when he left his job as Hancock County administrator in June, he’d spend the remainder of his career in the private sector.

Three months later, he’s a county administrator again, but in Penobscot County, where he worked as finance director for nine years. He left the county government to become town manager in Milford before taking the Hancock County job in Ellsworth in 2016.

Adkins’ first day on the job in Bangor was Sept. 12. He replaced Erika Honey, who left in August to care for family members out of state. She became administrator in January 2021, when Bill Collins retired after 18 years on the job.

Adkins rejoins the county as it works on plans for spending nearly $30 million in federal funding it received through the American Rescue Plan Act, a sum that’s larger than the county’s typical annual budget. Attendees at community forums the county held identified investments in housing, mental health and substance use treatment services and broadband internet infrastructure as top priorities, and the county last month awarded a first round of grants totaling $200,000 to nine organizations tackling mental health challenges and substance use disorder.

Adkins also takes over as county officials plan a 100-bed expansion of the Penobscot County Jail.

The county government covers the county jail, sheriff’s office, registry of deeds and probate court, and it’s responsible for services for residents of the unorganized territories that fall within county lines.

Adkins said Friday he has been pleased with and surprised by the warm welcome he’s received from commissioners and longtime staff he worked with previously. During his absence, he said, some things have changed while other challenges remain unresolved.

“Internally, things are much more organized,” he said. “Having an official human resource department [created in 2019] has proven to be a very good thing. The aging and overcrowded jail has not changed. In fact, it has gotten worse.”

The jail had 172 inmates on Tuesday, Sheriff Troy Morton told commissioners at their weekly meeting. The facility is licensed for 157 inmates. An additional 68 were boarded at other facilities, the sheriff said.

“The jail should be our No. 1 concern,” Adkins said. “We need an active solution. We need a facility that will support physical and mental health and rehabilitation as well as education and crime prevention. It will have to include a corrections side but we need a larger facility.”

Commission Chair Laura Sanborn of Alton agreed that Adkins’ top priority has to do with the jail.

“The most important aspect of the administrator position for Scott will be identifying a cost-effective, reasonable and workable solution for the jail population,” she said. “Paramount in importance is treatment as well as safe housing for those in our care with substance abuse problems and mental health needs.”

Other priorities include addressing staffing shortages in the jail and at the Penobscot Regional Communications Center, one of the busiest emergency dispatch centers in the state, and making sure wages for county employees are comparable with other counties in northern Maine.

Sanborn and Adkins agreed that his first task is getting to know his leadership team, understanding where they are today and where they see Penobscot County moving forward.

Adkins was born in Bangor and raised in Corinth. He graduated from Central High School and has degrees in business management and accounting from Beal College, now Beal University. As finance director for nine years, he said, he’s familiar with Penobscot County’s financial needs and how they must be balanced with taxpayers’ ability to fund county operations.

“I’m not sure anyone else could get on this bus and drive it,” he said of his new position. “I appreciate that the people here trust me.”