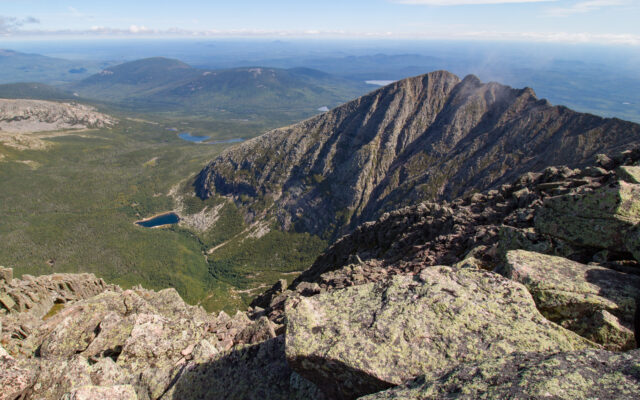 Contributed • September 17, 2022
By Aislinn Sarnacki Katahdin, Maine’s tallest peak, has long been a source of awe and adoration. With its rocky peaks, sharp ridges and boulder-filled slides, it towers over the forest, a granite giant at the heart of Maine.

Katahdin, Maine’s tallest peak, has long been a source of awe and adoration. With its rocky peaks, sharp ridges and boulder-filled slides, it towers over the forest, a granite giant at the heart of Maine.

Starting as a teen, I have hiked the mountain many times with family and friends, and the experience never gets old. Nor does it get any easier.

Over the years, I’ve learned some interesting things about the mountain’s history and habitats. Here are just a few of those fascinating facts.

1. Katahdin rises 5,267 feet above sea level, just 13 feet shy of a mile. Near the summit of the mountain, a giant rock pile is said to reach that mile-high mark. For many who hike the mountain, it’s tradition to touch both the summit sign and the famous rock pile.

2. The alpine area on top of Katahdin is home to a butterfly that’s found nowhere else on Earth. Named the Katahdin arctic butterfly, the species is considered endangered. Emerging in early July, it has yellowish-brown, semi-translucent wings. It flies for about a month, laying eggs on hardy sedges growing on Katahdin’s Tableland.

3. The name “Katahdin” is an Abenaki word given to the mountain by the Penobscot people. It roughly translates to “greatest mountain.” That’s why it’s redundant to say Mount Katahdin.

4. More than 60 people have died on Katahdin since the first known death in Baxter State Park was recorded in 1933. The 2018 book “Death on Katahdin” by Randi Minetor lists 64 of those deaths. After the book was published, in 2020, two hikers died on Katahdin within a two-day span.

5. Katahdin was purchased by former Maine Gov. Percival Baxter in 1930, as a part of a 6,000-acre parcel. A year later, he donated it to the state of Maine with the condition that it remain “forever wild.” Over the next 30 or so years, Baxter continued to purchase and donate chunks of surrounding land, expanding Baxter State Park to more than 200,000 acres.

6. Black bears have been spotted near the top of Katahdin, feasting on wild blueberries, crowberries, cranberries and bilberries. However, such sightings are rare. While there are plenty of bears in Baxter State Park, they generally avoid people (as long as food is stowed properly).

I’ve only seen a bear once while in the park. I was driving along the park’s Tote Road, and a massive bear barrelled across the road in front of us. I didn’t realize they could run so fast. It was an eye-opening experience.

7. In July of 1939, a 12-year-old boy named Donn Fendler became lost while hiking with his family on Katahdin. He wandered alone in the wilderness for nine days before, delirious from exhaustion, he stumbled upon a remote camp about 35 miles from where he’d gone missing. He shared his survival story in a book, “Lost on a Mountain in Maine,” which has since become a classic. Many children read it in elementary school. I did.

Fendler died at age 90 in 2016. Prior to that, in 2011, I had the opportunity to interview him over the phone for a story I was writing about a graphic novel he’d authored with Lynn Plourde, illustrated by Ben Bishop. During the interview, Fendler was notably kind, well-spoken and generous with his time. I learned that, over the years, he had visited many Maine classrooms to talk with children about his experience.

8. There are several ways to hike Katahdin. Abol Trail climbs a rock slide up the southwest side, while Hunt Trail follows a dramatic western ridge. Helon Taylor Trail climbs the east side to the mountain’s second highest peak, Pamola. Chimney Pond Trail approaches from the east to reach Chimney Pond, a glacial tarn nestled in the arms of the mountain. And from there, hikers can choose to scale the mountain on Saddle Trail, Cathedral Trail or Dudley Trail.

Atop the mountain, Knife Edge Trail spans between Pamola and Baxter peaks. And on the northernmost portion of the mountain, Hamlin Ridge, North Peaks and Northwest Basin trails meet at Hamlin Peak. Best to carry a map.

9. A Penobscot Indian entity called Pamola dwells on Katahdin. Stories of the spirit have been retold and altered many times over the years, but it is generally agreed that it has the head of a moose, large wings and the feet of a bird. Pamola is said to stir up cold weather and storms. Some describe the spirit as evil, while others claim it is a protector of the mountain.

My favorite stories of Pamola can be found in the book “Chimney Pond Tales” by Leroy Dudley, who guided on the mountain from the 1890s to his death in 1942. His family had a close relationship with Gov. John Neptune of the Penobscot Indian tribe.

10. The top of Katahdin is the northern terminus of the National Scenic Appalachian Trail, a 2,190-mile footpath that spans from Georgia to Maine, crossing through 14 states along the way. If you hike the mountain, you may come across AT thru-hikers, people who’ve set out to hike the entire trail. You’re most likely to meet them on the Hunt Trail, which is marked with white paint because it is a part of the AT. All other trails on Katahdin are marked with blue paint.

As I wrap up this list, the perfectionist in me wants to continue and explain how glaciers carved Katahdin, and how Henry David Thoreau attempted to climb to the summit and failed. The mountain is home to so many stories.
If visiting the mountain, be sure to check out the Baxter State Park rules and tips at baxterstatepark.org. Hiking the mountain takes planning and serious preparation, but I’ve always found it to be well worth the effort.