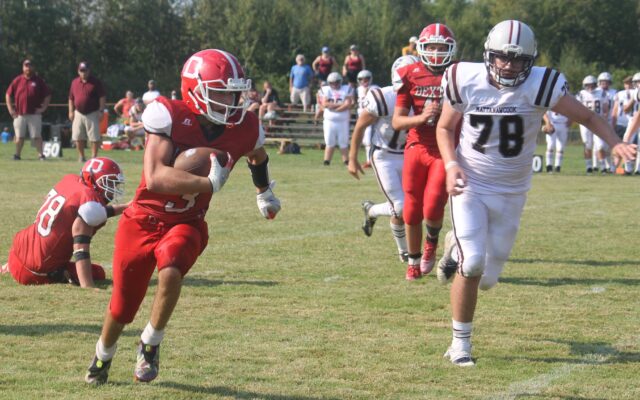 Dexter gets past Mattanawcook in 76-56 shootout

Stuart Hedstrom • September 12, 2022
Beaudry and Connor account for all 10 Tiger touchdowns  DEXTER — Dexter Regional High School and Mattanawcook Academy of Lincoln would combine for 18 touchdowns and 132 points during an 8-man Small School North contest on a very warm and muggy Saturday afternoon, Sept. 10.

DEXTER — Dexter Regional High School and Mattanawcook Academy of Lincoln would combine for 18 touchdowns and 132 points during an 8-man Small School North contest on a very warm and muggy Saturday afternoon, Sept. 10. The Tigers, playing the team’s first home contest of 2022, found the endzone 10 of the 18 times to earn a 76-56 victory and improve to 2-0.

During the second quarter the Lynx (1-1) regained the lead at 34-30 after Dexter went ahead for the first time on the preceding possession. The Tigers used nine plays to move the football from the team’s 15-yard line to the Mattanawcook-6. On first-and-goal junior Gage Beaudry ran six yards for the score to put the Tigers ahead 36-34 (senior quarterback Bryce Connor then ran the ball for two and a 38-34 advantage).

Each team scored touchdowns on the majority of its possessions. Excluding both second team offenses having the ball in the game’s final minutes, Dexter punted only once, Mattanawcook attempted one punt but pressure prevented the ball from being kicked, and both were stopped when going for it on a fourth down attempt. The Tigers avoided turning the ball over all day but the Lynx fumbled late in the first half.

Beaudry made the recovery at the Mattanawcook-33 with 1:05 on the clock before halftime and soon after Dexter had the football at the 11-yard line with just enough time remaining for one more play. Connor threw the football and connected with junior Will Spratt who dodged a would-be tackler and got across the goal line. Beaudry followed with a 2-point rush to give his team a 46-34 lead.

Dexter would end up converting on eight of 10 2-point conversions, while holding Mattanawcook to 4-of-8 in its opportunities.

A 43-yard Connor scramble gave the Tigers a touchdown on the first drive of the second half and 52-34 advantage.

Mattanawcook would score on its first possession of the second half – Lynx senior Isaac Hainer ran for five touchdowns and passed for two more – and then the defense forced Dexer’s lone punt on a three-and-out.

The Lynx offense would move down the field, but the Tiger defense forced the opposition into a 4th-and-9 at the Dexter-35. Here Tiger Caleb Schobel burst through the line and tackled Hainer for a 4-yard loss and the Dexter offense took over.

During the first play of the fourth quarter Beaudry ran off left tackle from the 7-yard line for the score and his 2-point rush put Dexter ahead by three possessions at 60-42.

Mattanawcook would score twice more in the last 12:00 but both times Dexter responded with a short touchdown run by Connor and successful conversion rush from the signal-caller.

Beaudry carried the football 30 times, gaining a game-high 291 yards and scoring four touchdowns. He also ran the ball across the goal line on four of Dexter’s eight 2-point conversion attempts.

Connor also had a big day rushing for 194 yards in 14 carries. He scored four touchdowns on the ground, threw for another on the completion to Spratt, and brought a kickoff back 91 yards in the first quarter as Connor and Beaudry had a hand in all 10 of their team’s touchdowns.