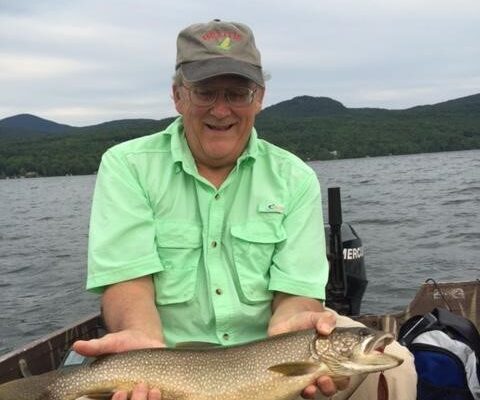 Contributed • August 5, 2022
By Leighton Wass Summertime fishing for togue, or lakers as they are called outside of Maine, has evolved over the years from trolling with metal lines (braided copper and monel) to lead core lines, and finally to downriggers. Another technique that has taken off like a race car in recent years is jigging or, as some folks call it, spincasting.

Summertime fishing for togue, or lakers as they are called outside of Maine, has evolved over the years from trolling with metal lines (braided copper and monel) to lead core lines, and finally to downriggers.

Another technique that has taken off like a race car in recent years is jigging or, as some folks call it, spincasting. I was first introduced to this method in 1973 by a friend who had become adept using it on Lake Seymore in Vermont. I have continued to use this non-trolling, togue-busting tactic ever since.

The process is similar to jigging through the ice in that the lure is dropped to the bottom and then given some action by pumping the rod. It’s hellishly effective.

The tri-state area of Vermont, New Hampshire and Maine is loaded with togue-laden waters where spincasting can be used. In Vermont I have been successful on Caspian Lake, Willoughby Lake and Lake Champlain, among others. I have fished only one lake in Maine by jigging and that was Branch Lake in Ellsworth. I’ll add that it’s a location worth trying.

OK, so you have chosen a lake to fish. How do you find the togue? The easiest way is to use a fish finder in conjunction with a depth chart. During the summer I primarily search for togue near dropoffs, underwater reefs and humps. The chart will direct me to those potential fishing spots, and the fish finder will tell me if anyone is home.

Togue prefer water temperatures between 42 and 52 degrees Fahrenheit, so you need to be searching in deep water. The depths where togue hang out varies from one lake to another, but they will always be where there is food, namely smelts.

In many lakes and ponds, 45 to 65 feet is about the right depth to start looking for togue. In a few lakes such as Lake Champlain in Vermont and Lake Winnipesaukee in New Hampshire, spincasters may have to search for togue in much deeper water, 80 to 100 feet.

After finding some fish, I will either drift over the spot, if it’s calm to light winds, or anchor nearby. If the lake is large, and I am fishing far from shore, I often drop a marker buoy near the fish, especially when drifting. I make my own buoys out of white pine, paint them fluorescent orange, and then wrap sturdy string around them with heavy weights at the end.

I recently bought a trolling motor and one of its features is called “spot lock position.” Using the built-in GPS, the trolling motor can keep a boat in that same position, as if it is anchored. Although I haven’t tried it yet, I’m expecting to use it when I spincast for togue and walleyes.

The beauty of jigging for togue is that no lead core line or downriggers are needed. All that is required is a fairly stout 6- to 7-foot spinning rod coupled with a spinning reel loaded with 10- to 15-pound test braided line. I like to use around 6 feet of 8- to 10-pound test leader.

Monofilament line will also work but, because it stretches a lot in deep water, hooking fish may not be as certain. That said, I can tell you that I have landed a ton of togue on monofilament line.

For “bait,” a heavy copper or silver spoon that flutters or wobbles, a white or pearl marabou jig, or soft-bodied shads and tube jigs will catch all you need for supper. Lures like Mooselook Wobblers and Suttons will do the job, too, but they are so lightweight that while they are sinking like a feather to bottom, your partner may already be hooked up with his heavier tube jig! I also find that the lightweight lures tend to tangle more easily with the leader.

Goldfish, Sidewinders and other similarly weighted lures are effective, but, in reality, there is at least a shedload of lures that will work. My favorite lure for this style of fishing is one that you can’t buy.

A good friend made it for me several years ago by shaping a piece of copper tubing into a killer lure. He added a little red paint to it, made scale-like marks by hammering a nail punch on one side, and covered it with a shiny, clear coating. It is my go-to lure.

The deeper the water, the heavier the lure needs to be. A Swedish Pimple will sink like a bullet to the bottom, but there’s not a whole lot of flutter to it and I find it is a lure that also tangles with the leader quite often. On the other hand, it is a time-tested togue catcher.

The wobbling of a lure as it descends to bottom attracts nearby togue because it flashes like baitfish. As a result, they will sometimes nail it on its free fall to bottom, so it’s important to be prepared for an impromptu stop of the sinking lure and set the hook.

After casting toward the marked fish and letting the lure settle to bottom, I pump the rod upwards a couple times, reel the line a couple turns, then let the lure sink back to bottom, repeating this process until the bait is straight up and down next to the boat. I then will jig it in place for 4 to 5 minutes (vertical jigging) by raising the rod high and then lowering it slowly to bottom. If no fish accept your presentation, it’s a matter of recasting in the direction of the marked fish. Almost always a togue will grab your lure on the downfall, or just as you start to pull it up again.

If a blockbuster lure that worked so well last week isn’t doing anything after 20 minutes of use, and yet your fish finder is yelling FISH GALORE, try something different until you find a lure that does work.

Sometimes a togue will follow your lure right up to the boat. I’ve had some nice fish do that but after seeing my ugly puss, they put the afterburners on and head straight for the bottom!

If you have a follow like that, quickly open the bail of your reel and let the lure flutter downward. They will often grab it right there before it sinks even a few feet.

In rare instances, I have also been pleasantly surprised by catching rainbows, salmon and brown trout while fishing this way for togue.