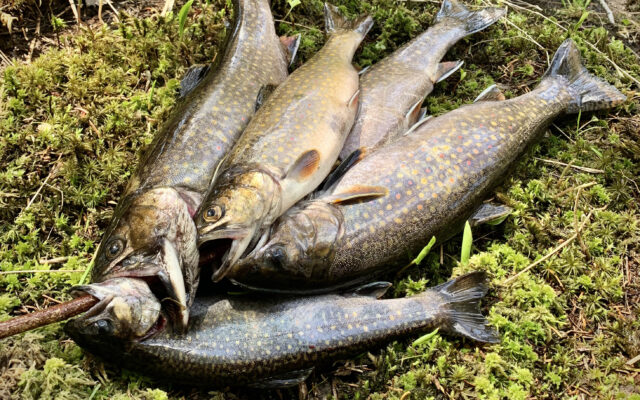 Contributed • July 30, 2022
By Chris Sargent “I could tell you but I’d have to kill you!” said Billy, a family friend and neighbor when I asked where he’d caught the five largest brook trout I’d ever seen at the time.  Billy had stopped by our house to show off his catch as he often did, but these trout were real beauties for our area, and my youthful mind was blown at the sight of them.

“I could tell you but I’d have to kill you!” said Billy, a family friend and neighbor when I asked where he’d caught the five largest brook trout I’d ever seen at the time.

Billy had stopped by our house to show off his catch as he often did, but these trout were real beauties for our area, and my youthful mind was blown at the sight of them. None was less than 14 inches, and the biggest was maybe a hair over 20.

Each year during the hottest, haziest dog days of late Maine summer, Billy would strike fishing gold and lug home a mess of plus-sized brookies. I was mystified by the fact these trout came from somewhere nearby in waters I fished too but from which I’d only managed to pull a couple 10 inchers.

In reality, I knew exactly where they came from, I just had no idea where it was or how to get there: it was Billy’s secret spot.

What makes a good secret spot? There are a number of factors to consider but only a few are required. Basically, the spot has to hold an abundance of targeted fish or game and you need to be the only one — or one of few — that knows about it.

Some other considerations may sweeten the spot. Generally, the farther away from a beaten path or well-used road the spot is, the better. Not always, but all too often, folks won’t venture more than a few hundred yards from their vehicle in pursuit of fish and game. Beyond that requires drive, determination, stamina and desire.

However, remoteness doesn’t always have to be a crucial factor, and in fact, I located my best secret brook trout spot less than 100 yards from a busy construction company’s gravel pit, easily accessible to most anyone but simply overlooked and tucked just out of the way. The last time I fished it with any success, while it was mine, I took a limit of five fat, beautiful trout. It was rare for me to ever keep more than one or two fish, but I’m glad I did that afternoon. The following year, it was exposed after the land and stream cutting through it was obtained by an area heritage trust. Hiking trails now pass within feet of the bank and discarded worm containers litter a path to the now-popular spot. How dare they not check with me first and seek permission!

Over the years, as many do with their own secret spots, I developed a sense of ownership of it, feeling as though it was mine and subsequently held the rights to it. The truth is, just as with any secret spot, it was anyone’s to find and fish, which was a scenario I’d cross my fingers each year for to pray not to happen. I’d never imagined a spring without that spot and was crushed when I lost it.

While nothing I did spoiled the secret, this brings me to our next point of discussion, which is the protection and retention of such a spot.

Without question, the most important defensive and preservative action one can take to protect a secret spot is to just simply keep it a secret. Loose lips sink ships, and the telling of even one leaky boat of a friend can jeopardize it. Pictures of the spot should be avoided, or at least take extreme efforts to disguise it. If pictures are unavoidable, dissemination to the public should be kept to a minimum and any captions should include “an undisclosed location”.

I recently found myself engaged in a heated argument with a best friend over a secret striper spot a friend of his had graciously showed him that they had been fishing for several years with stellar success.

Over the past few seasons, I’d grown tired of hearing how great the fishing was in this particular spot — especially since I consider myself trustworthy — and had requested to be brought there and been denied more than a dozen times. When my phone rang at 8:30 p.m. on a favorable tide, I knew the drill and made a less than courteous remark to my friend about where I figured he was headed.

The fact of the matter was, I was jealous, plain and simple. I pushed, poked, prodded and demanded, but my buddy never cracked, sticking to the promise he’d made about keeping the spot to himself. As mad as I was, he’d done the right thing. He was right and I was wrong but I’ll find that spot one day and show up there on the right tide as they make their first few casts.

I’ve lost contact with Billy over the years, which is sad because he taught me so much and I looked up to him. His knack for finding the biggest buck, heaviest bear and most beautiful trout was no doubt due to his sixth sense when it came to the outdoors.

But he also realized the importance of never revealing his most closely guarded outdoor secrets. His success was hard earned and I respected it. While he allowed me to tag along on several hunting and fishing excursions as a youngster, Billy never showed me the secret spot he pulled those five trophy trout from and I think that was purposeful.

He wanted me to find it, to earn it, to claim it as my own, and I’ll spend a lifetime searching.