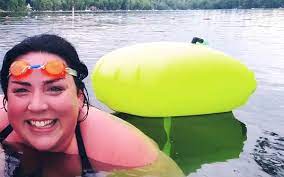 Contributed • July 27, 2022
By Kathleen O’Brien, Bangor Daily News Staff Ali Simonds of Belfast is on a mission to swim at least a mile in a different Maine lake every day in August. The University of Maine graduate student’s swims next month are part of a fundraising campaign for LifeFlight of Maine, the state’s only emergency medical air transport service.

Ali Simonds of Belfast is on a mission to swim at least a mile in a different Maine lake every day in August.

The University of Maine graduate student’s swims next month are part of a fundraising campaign for LifeFlight of Maine, the state’s only emergency medical air transport service.

But they’re also part of a larger mission for Simonds that she’s pursued over the past 2.5 years since her father’s death from pulmonary fibrosis in 2019: swimming a mile in every Maine lake and pond that’s larger than 50 acres. As of July 25, she had swum in 100 Maine lakes.

“He was my biggest cheerleader, both when I swam and through everything in my life,” she said.

Simonds, 38, is in her second year of graduate school in the University of Maine’s Communications Sciences and Disorders Department. She hopes to become a speech language pathologist and work with adults who have suffered traumatic brain injuries.

LifeFlight of Maine’s helicopters, airplanes and ambulances care for everyone from premature infants to people with complex traumatic injuries and burns. LifeFlight cared for more than 2,300 patients in 2021 and has transported more than 34,000 patients since it was launched in 1998, according to the organization.

The organization’s 2022 Cross for LifeFlight campaign, for which Simonds is raising money, has a $400,000 fundraising goal. It would be used to upgrade the organization’s helicopters, buy needed on-board equipment, fund clinical education and training programs across the state and improve Maine’s aviation infrastructure.

Pre-pandemic, Cross for LifeFlight was known as the Isleboro Crossing. The fundraiser was an in-person 5K swim or paddle across Penobscot Bay. Like most things, however, the event had to be modified during the COVID-19 pandemic.

Now, the fundraiser is a customizable outdoor adventure challenge that runs the entire month of August. Participants set their own goals and can work alone or as a team doing any form of outdoor activity, such as hiking, cycling, swimming, paddling or running.

Simonds’ father, Phil, first proposed the idea of swimming in every Maine lake and pond in jest in 2018. She initially brushed off the suggestion, until he started spreading the news to everyone who walked into his room at Brigham and Women’s Hospital in Boston, where he was receiving treatment for pulmonary fibrosis.

“He was my favorite person,” she said. “He was a goofy, weird guy who always had something interesting to say. He had a passion for helping people and was always willing to lend a hand.”

Phil Simonds was a firefighter for the Waterville Fire Department for 29 years, 15 of which he spent as fire captain.

In addition to honoring her father and raising money for LifeFlight, Simonds is using her swimming quest to champion water safety for swimmers and boaters and advocate for clean water. Simonds collects water samples from every body of water she swims in and hopes to have them tested for microplastics.