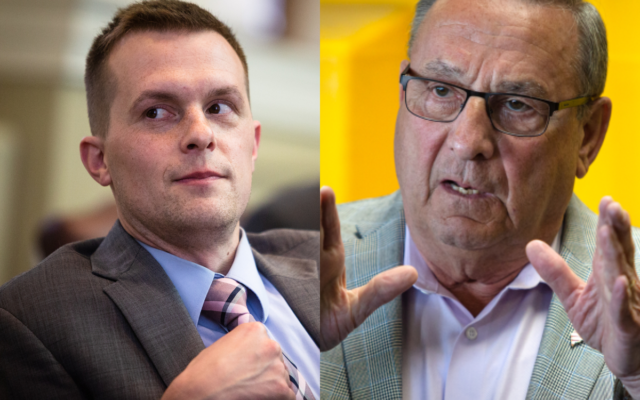 AUGUSTA — Former Gov. Paul LePage and U.S. Rep. Jared Golden of the 2nd District were endorsed by a police group in a notable partisan split in Maine’s two top-tier races for a conservative-leaning constituency.

News of the endorsements, which have been confirmed for weeks, broke on Friday as the Maine Lodge of the Fraternal Order of Police planned separate Monday news conferences with the former Republican governor in Augusta and the Democratic congressman in Lewiston.

Backing from the group representing 850 police officers across the state has significance for both politicians, particularly Golden, who is running in a nationally targeted race in a swing district against former Rep. Bruce Poliquin, a Republican. LePage is facing Gov. Janet Mills, a Democrat and former attorney general well-known to the law enforcement community. Independents are on the ballot in both races — gubernatorial candidate Sam Hunkler and congressional hopeful Tiffany Bond.

The order does not always endorse in Maine’s biggest races, but it backed Sen. Susan Collins, a Republican, in her 2020 campaign against Democrat Sara Gideon. The national group has been reliably conservative in recent years, backing former President Donald Trump in both 2016 and 2020. It has not endorsed a Democrat in a presidential race since Bill Clinton in 1996.

In Maine, the group endorses by taking a series of votes among local police department memberships and then gives each jurisdiction one vote. The votes for LePage and Golden were overwhelming, said Michael Edes, the executive director of the state order.

No particular issue decided the endorsement of LePage over Mills, Edes said. Both candidates met with the group. Members chose the former governor after “eight years of support” for police, Edes said.

Edes praised Golden, saying he was “good to his word that he’s going to support law enforcement” since early in his tenure. The second-term congressman voted against his party’s signature policing overhaul in 2021, a move that helped cement the endorsement.

That measure, named the George Floyd Justice in Policing Act after the Black man whose 2020 killing by police in Minnesota sparked nationwide protests, would have banned “qualified immunity,” which bars certain lawsuits against police, and create national accountability standards.

While Golden voted earlier to allow the measure to move forward, saying he wanted to see bipartisan negotiations on the subject, he was only one of two Democrats to oppose it last year after a partisan version was advanced, saying his vote was partially “out of respect for the difficult decisions confronting law enforcement officers in the line of duty.”

“It’s time for us to have a voice and tell all the candidates that have supported us how much we appreciate it,” Edes said.

The endorsement could be a powerful electoral retort for Golden, who has been targeted as recently as a few days ago by national Republicans’ campaign arm for campaign support from liberal groups that have backed the “defund the police” movement that grew from racial-justice protests in 2020.

In a statement, Poliquin cited that and a 2016 donation from a legislative political committee that he ran to the progressive Maine People’s Alliance, which was part of a network of groups that led rallies and other organizing activities two summers ago.

“The FOP endorses people of both political parties and sometimes gets it right, but with Jared Golden they had the wool pulled over their eyes,” Poliquin said.

Mills’ campaign did not respond to a request for comment.