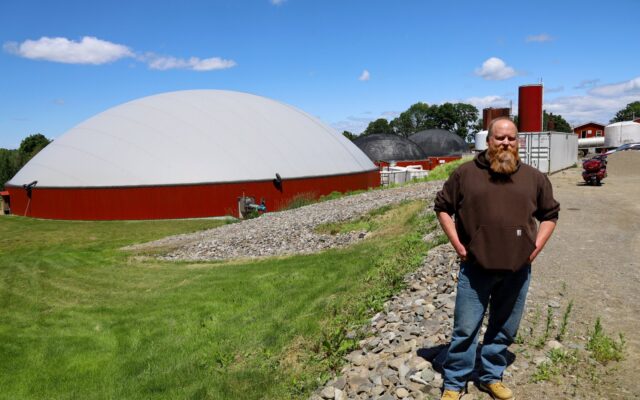 This Exeter farm converts truckloads of food waste to electricity. It could be taking more.

Contributed • July 21, 2022
By Charles Eichacker, Maine Public Open a garbage can in a Maine home, and you’re likely to find some icky surprises: banana peels, coffee grounds, moldy bagels, chunks of chicken. Uneaten food makes up almost 30 percent of what Mainers throw out every day.

Open a garbage can in a Maine home, and you’re likely to find some icky surprises: banana peels, coffee grounds, moldy bagels, chunks of chicken.

Uneaten food makes up almost 30 percent of what Mainers throw out every day. Besides stinking up the trash, that’s a big problem for the planet. Landfilled food releases methane, a harmful greenhouse gas that significantly contributes to global warming. That’s on top of the energy and resources already spent to grow or raise it.

Altogether, food waste causes 8 percent to 10 percent of the world’s greenhouse gas emissions, making it a bigger contributor to climate change than the aviation industry.

Now, a growing number of Mainers, communities and groups are trying to waste less food — and when not possible, to dispose of their leftovers in better ways. While many of those recovery efforts involve composting or donating to food banks, perhaps the biggest takes a different approach.

About a decade ago, a fifth-generation dairy farm in Penobscot County installed a system for managing the vast piles of manure produced by its 1,000 cows. By loading the manure into large, heated tanks filled with microbes, they could generate electricity using a technique called anaerobic digestion.

It was a decision made primarily for business reasons — to cut the farm’s energy costs and bring new income from the excess electricity it generates. But soon, the farm realized it could get even more bang for its buck by adding another organic material into the mix: leftover food.

“We realized that the economics were much more attractive,” said John Wintle, who manages the Exeter facility and is part of that family that owns Stonyvale Farm. “You can make a lot more gas per pound of food waste than you can from dairy manure, because the dairy manure has already been digested by the cow. So with the same footprint, if we took in food waste, we could make a lot more gas, a lot more electricity.”

Within a few years, Stonyvale Farm grew to include a set of companies, including its digestion business, Exeter Agri-Energy and an offshoot, Agri-Cycle Energy, that trucks in many tons of food waste from Maine and beyond to mix with the manure.

After investing heavily in upgrades over a seven-year period — subsidized by around $3 million in government grants — they now operate three digesters and a depackaging machine that, when operating at full scale, can power 2,500 homes.

While many farms across the country have installed anaerobic digesters to handle their manure in recent decades, it’s less common for them to operate at that scale or to add food waste to them. No other farms in Maine do so, and the federal government is only aware of a few dozen similar operations — including several in Massachusetts and Vermont. However, another farm in Clinton is now working to install a digester to convert just its cow manure to natural gas.

The effort at Stonyvale Farm has brought numerous economic and environmental benefits, including shoring up Maine’s second-biggest dairy farm and boosting the potential for Maine to reduce the greenhouse gas emissions from its food waste — the vast majority of which has traditionally gone to the landfill or incinerator.

However, while the Exeter farm has rapidly expanded the capacity for Maine to recycle its food waste, it’s still an underused resource in the state.

Maine generates more than 200,000 tons of food scraps each year, and the statewide capacity for recycling all that material grew by about four times between 2014 and 2017, reaching almost 90,000 tons per year, according to a 2018 report from University of Maine researchers.

Much of that growth came from Agri-Energy, which can accept 80,000 tons of food waste annually. But the amount of leftover food and other organic material actually being recycled hasn’t kept pace, judging by numbers from the Penobscot County facility.

Agri-Energy has received an average of 43,000 tons of waste each year since 2018 — just over half its processing capacity — up from 14,800 tons in 2016 and 27,000 in 2017, according to data it reports to state environmental regulators. And only about half of the material it does receive comes from within Maine.

It’s hard to get a more complete picture of the state’s food waste problem, since the Maine Department of Environmental Protection has not consistently tracked it over the years. In its most recent waste report covering 2018 to 2019, the agency did note that a large portion of scraps still appeared to be headed for the landfill or incinerator.

For the last few years, environmental groups and some trash handlers have unsuccessfully pushed for Maine to take a harder line on food waste going into the landfill. That included a food waste ban that was proposed in the Legislature last year and, in 2019, a bill directing state officials to report back on mandates and incentives for boosting composting.

At least six states have passed some sort of ban on food in their landfills, including New York, California and every other New England state except for New Hampshire. Many of the restrictions apply to businesses and institutions, while Vermont has gone further and banned homes from trashing food scraps. The restrictions have prompted a spike in composting and donations to food banks.

“We have proven and effective systems that are better for managing this: composting and anaerobic digestion,” said Peter Blair, a staff attorney at the Conservation Law Foundation, who called Vermont’s approach “the gold-standard.” “Maine is really lagging behind other states that have implemented programs that really focus on reducing large quantities of food waste.”

So far, Maine environmental officials have opposed adopting similar restrictions. They note that Maine is taking steps to keep food out of the landfill, such as awarding grants to support recycling and providing assistance to composting programs.

In 2015, lawmakers established a hierarchy of food recovery options to guide future regulations, which prioritizes reducing food waste, followed by donating it to food banks or livestock farms. It ranks composting or converting food to fuel as the fourth option, just above burning or burying it.

And in 2020, the Mills administration made a passing nod to reducing food waste in its “Maine Won’t Wait” climate action plan.

Paula Clark, the director of Maine’s division of materials management, has said that restrictions might be warranted in the future, but that for now, the state doesn’t have enough haulers or facilities to support mandatory food recycling, especially outside the Interstate 95 corridor.

In testimony against the 2019 bill requiring a study of food waste bans, Clark specifically highlighted Agri-Energy as a promising solution.

But she said that the legislation “would not result in new or useful information at this time, and would divert our very limited staff resources from the organics management work we have already planned and prioritized.”

While the anaerobic digester at Stonyvale Farm has allowed many Maine schools, hospitals, supermarkets and communities to separate food scraps from their trash, its owners said that it will take more than good intentions to significantly boost the state’s food recycling rate.

In written testimony for one of the recent Maine proposals, an official from Agri-Cycle argued that other states’ restrictions have played a “large” role in developing the market.

“I think the vast majority of Mainers — you know, kind of exemplified by our clientele — they want to do the right thing and are proactively doing the right thing without being forced,” said Holden Cookson, Agri-Cycle’s brand manager, during a recent tour of the Exeter facility. “But with any community, there are going to be people who will only act if forced, essentially, or incentivized to do so.”