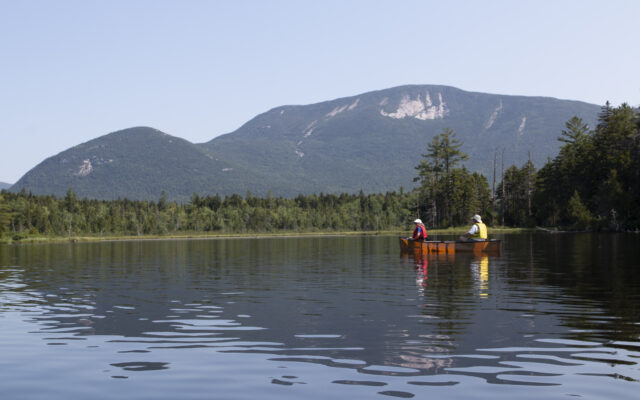 Contributed • July 21, 2022
By Pete Warner, Bangor Daily News Staff Maine’s reputation as a pristine outdoors destination has recently taken some hits.  Ticks, which are killing Maine moose and infecting people with Lyme disease, are proliferating throughout the state as the climate continues to warm.

Maine’s reputation as a pristine outdoors destination has recently taken some hits.

Ticks, which are killing Maine moose and infecting people with Lyme disease, are proliferating throughout the state as the climate continues to warm.

The persistent presence of dangerous mercury in fish is part of the daily reality for anglers who want to eat their catch.

And then there’s the dramatic discovery that so-called forever chemicals are present in white-tailed deer and wild turkeys in the Fairfield area, along with freshwater fish in several waters.

These developments have been shocking enough for the Mainers who hunt, fish, swim and hike regularly in the state. For Registered Maine Guides and others whose businesses rely on a clean environment to attract tourism, there’s fear that the discovery of forever chemicals and the effects of climate change may threaten some of Maine’s most revered pastimes.

“From a business perspective, Maine’s big selling point is a relatively clean environment and all of this diminishes that,” Don Kleiner, a Master Maine Guide who operates Maine Outdoors in Union, said of the discovery of per- and polyfluoroalkyl substances in deer, fish and other wildlife.

Maine is 14th in the nation for the quality of its natural environment — coming in 31st for air and water quality and eighth for pollution — according to a ranking from U.S. News and World Report. In New England, only Connecticut has a worse overall ranking.

The mounting environmental threats are worrisome to those who depend on clean woods and waters.

“Hunting is a big part of our culture. Our communities, our guides and associated businesses rely on it,” David Trahan, the executive director of the Sportsmen’s Alliance of Maine, said when the news of tainted deer in Greater Fairfield emerged.

“We have this magnificent brand in Maine of a clean environment and beautiful scenery and great wildlife, and this has the potential to do some harm to our reputation if we don’t get ahead of it,” Trahan said.

Mainers immersed in conservation efforts say the state and those who enjoy the outdoors have long been contending with factors that tarnish the state’s renown.

“The whole idea that the Maine woods is some pristine forest is nonsense,” said Bob Mallard, executive director of the Native Fish Coalition, who writes a monthly outdoors column for the Bangor Daily News.

“This is a working forest. We’re cutting constantly there, we’re spraying defoliants on the roads, we’re road-building,” he said. “What we are doing is permanent damage.”

Large-scale cutting initiated during the peak of the spruce budworm infestation in the 1970s and ’80s that imperiled the forestry industry has had unintended consequences on Maine wildlife.

The generation of trees cut during that time kept the state’s paper mills cranking during their heyday and allowed the moose population to thrive thanks to abundant tree regrowth. The heavy cutting also led to the elimination of important deer wintering habitat. Deer in the northern region continue to struggle, although DIF&W is working on a program to rebuild suitable wintering habitat.

The moose population is potentially at risk as ticks become more plentiful due to warmer temperatures in the late fall and early winter. A single moose can carry up to 90,000 ticks on it. DIF&W reported that a record 90 percent of calves captured and collared last winter in Wildlife Management District 4 died by the beginning of May.

Residents and tourists alike visit the Moosehead Lake region and areas including Baxter State Park hoping to catch a glimpse of a moose. The state’s efforts to study winter ticks could help determine the future viability of moose in Maine.

The growing list of environmental problems has not hurt tourism yet, according to Jennifer Geiger, the spokesperson for the Maine Office of Tourism.

“The Maine Office of Tourism has not seen any measurable visitor impact from the environmental issues,” she said. “But we continually monitor situations that may impact tourism and look to appropriate state agencies for guidance.”

Maine has a history of being proactive in cleaning up its environment. In 1972, Sen. Edmund Muskie spearheaded the passage of the Clean Water Act, which set the structure for regulating the discharge of pollutants into U.S. waters and established quality standards.

Paper mills for decades pumped rivers full of poisonous effluent, the byproduct of those operations, into the Penobscot, Kennebec and Androscoggin rivers. People were warned to avoid swimming in contaminated waters and were told not to consume fish taken from them.

Even our national bird, the bald eagle, was pushed to the brink of extinction by hunting and the bioaccumulation of pesticides that hampered its reproductive ability. By 1972, scientists could account for only 29 nesting pairs of bald eagles in Maine.

Scientists at the Maine Department of Inland Fisheries and Wildlife and other state agencies are working to mitigate the pollution issues. The Maine Department of Environmental Protection is taking samples from well water and soil in suspected areas of PFAS contamination while DIF&W is testing tissue samples from deer, wild turkeys and fish to determine the extent of the toxins.

Information obtained will guide the state in making decisions about whether it should ban or limit the consumption of potentially tainted meat from wildlife and fish to protect those who might eat it.

Not until chlorinated hydrocarbons, commonly referred to as PCBs, were banned by the federal government in 1979 did the tide turn in favor of cleaning up Maine’s waterways.

Even now, pollutants remain problematic in places such as the Penobscot River in Orrington. The company that once owned a former chemical plant there in 2021 agreed in a court settlement to spend between $187 million and $267 million to clean up mercury contamination.

And mercury remains a significant health concern for those who fish the state’s waters. For more than 30 years, DIF&W has issued consumption advisories for mercury, warning that many species of fish should be eaten in limited quantities by most people, or not at all by others.

Like most Mainers who make their living outdoors, Kleiner is not pushing the panic button. He said there is still much to be learned about how widespread PFAS is in Maine and how it might be affecting people, fish and wildlife.

“Also important to keep in mind that our ability to measure these sorts of things is constantly improving over time,” Kleiner said. “To me this adds a perspective that is often lost in these conversations.”