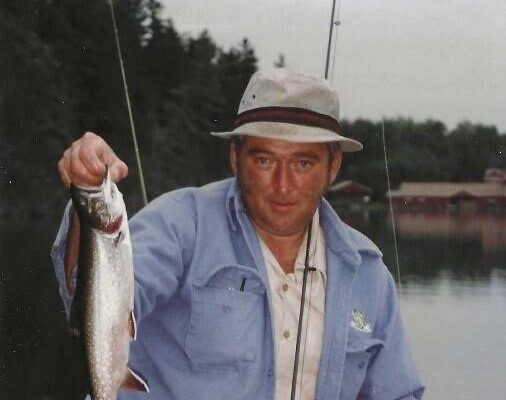 Contributed • July 20, 2022
By Leighton Wass There’s no question that fly fishing’s premier method for taking squaretails (brook trout) is with a floating fly line and the fly box classic, a dry fly. The enjoyment of seeing a trout take a fly with a slurp or splash on the surface is as good as it gets, and it doesn’t matter if it takes place on moving stream water or on the placid surface of a pond.

There’s no question that fly fishing’s premier method for taking squaretails (brook trout) is with a floating fly line and the fly box classic, a dry fly. The enjoyment of seeing a trout take a fly with a slurp or splash on the surface is as good as it gets, and it doesn’t matter if it takes place on moving stream water or on the placid surface of a pond.

Unlike the majority of fly anglers, I prefer to paddle a canoe on still water rather than wade fast-moving streams in the hunt for trout. Ponds give me a sense of solitude and tranquility coupled with soundlessness except for the calling of birds, the swishing of a fly line and the dipping of my paddle. It just makes me as happy as a Maine clam.

Fly fishing with dry flies on ponds is usually best when some kind of insect is hatching, resulting in brook trout coming to the surface where they are approachable to a dry fly Waltonian. But, how often do these anglers find trout rising on ponds? Sometimes, but it primarily occurs in the early morning or at dusk.

And how often can a fly fisher catch brookies on dry flies between these two times, in the middle of the day? Again, sometimes, but not often unless lady luck produces a daytime hatch. For that reason, most pond fly anglers fish only early in the day or at dusk.

I’d like to change that outlook for fly fishers by describing a technique that will put a squaretail in your net as easily during the day as it can be done early and late. How? Go deep with sinking fly lines (high-density lines) and tie on either a streamer or a nymph. I assure you that it works, and works well.

Sure, there are a few stuffy souls out there who pontificate that the use of sinking fly lines is not really fly fishing. Excuse me? Geez, there’s still a fly rod, fly line and a fly involved. Damned sure it’s fly fishing!

Some may have also heard that casting with a sinking fly line isn’t quite like a hot knife through butter as it is with a floating line. I actually agree with that assessment to some degree, but matching the correct fly rod with a proper fly line can produce casting almost as smooth as a smelt.

Granted, it does take different timing and some practice, but if you can cast a floater you can learn to cast a sinker.

Generally speaking, a fly rod for casting Hi-D fly lines should be on the long side (I use 6-weight, 9-footers), and its “action” (flexibility) needs some spine to it as in a “fast-action” rod. The weight of the fly line used depends on the water depth. I like to have a full range of sinking lines available that descend from a rate of 3 inches through 6 inches per second.

The most common pond depths that I Hi-D fish for squaretails are from 10 to 30 feet, and I want my fly right next to bottom (dredging the bottom) before stripping the fly. Because it’s cooler and darker near bottom, that’s where the majority of the decent trout will be during the day.

One common approach to determine when a fly has reached bottom is called the count-down method. After casting, count the number of seconds before stripping the fly back. If no hook-ups occur on bottom, or there are no weeds on the fly (or no fish), add five seconds to the next cast and repeat until you snag the bottom, bring back some aquatic weeds, or catch a trout.

Anchoring is usually best when fishing with Hi-D lines. Many small trout ponds have a “deep hole,” and in the summer I try those spots first. When casting, think of the fishable area as a clock and cast to every “hour” that you can reach. If trout aren’t cooperating after 20 minutes or so, move and anchor in a new spot at least a good cast away.

Wind can be a can of worms for a fly caster, so choose a location out of the wind, or go back to camp and play cribbage — or nap.

Stripping streamers fairly fast or inching nymphs is the proper technique to use when fishing this way. My brother, Stan Wass, slowly wraps the line around his fingers when retrieving nymphs, and as you can see from the accompanying photo, it works quite well. But sometimes trout will prefer a faster retrieve, often with a herky-jerky motion. Experiment until you find something that works.

A few more helpful hints when “dredging the bottom” are to use a short leader, keep the rod tip in the water when stripping and try to set the hook with the line instead of the rod. If the surface temperature is near 70 degrees or above, don’t play the trout for long at the surface if you plan to release it.

A few flies that have worked well for me include the Wooly Bugger, Maple Syrup, Wiggle Nymph, Black Ghost and Campbell Fancy. One of my largest squaretails (20-plus inches) came by this technique on a chartreuse Wooly Bugger in 17 feet of water.

Heck, it doesn’t bother me one iota that this gorgeous squaretail came to net while casting a Hi-D line. Would I have rather it been on a dry fly? Is there jelly in a peanut butter and jelly sandwich?