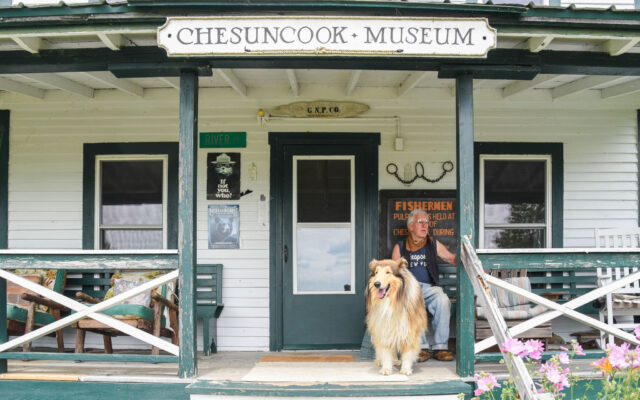 Contributed • July 18, 2022
By Sarah Sindo Have you ever visited a place steeped in rich history that left an imprint on you? I’ve paid numerous visits to Maine’s boom houses since I’ve been working at Big Eddy, and each year my admiration for the river driving days grows.  Earlier this month, I made my first trips of the year to the Ambajejus and Chesuncook boom houses.

Have you ever visited a place steeped in rich history that left an imprint on you? I’ve paid numerous visits to Maine’s boom houses since I’ve been working at Big Eddy, and each year my admiration for the river driving days grows.

Earlier this month, I made my first trips of the year to the Ambajejus and Chesuncook boom houses. The strategically located buildings were used to operate a boom that helped control the flow of logs to move them downriver for processing at mills.

Boom houses also had a kitchen and bunks to accommodate the river drivers.

The Ambajejus and Chesuncook boom houses serve as museums that are part of the West Branch Historical Preservation Committee. The nonprofit organization was formed in 2013 with the mission of preserving buildings along the West Branch watershed to honor the logging and river driving heritage.

The more frequently visited Ambajejus Boom House is only accessible by water. This trip requires a little more planning, but that makes it a fun adventure!

There’s two water routes that get you to the boom house. The first is the Ambajejus Lake public boat launch that sits directly across the road from North Woods Trading Post.

The second is via Grant Brook Road, which is just up the road from the public boat launch. A little ways down the road, you’ll come to the West Branch bridge where you can park and launch a canoe or kayak.

It’s a short paddle, less than a mile, down the river to the destination. Upon reaching the lake, you’ll immediately notice the boom house that sits on a point on an island.

Great Northern Paper built the boom house in 1906 and then moved it to this location the following year. The building housed up to 14 men, all of whom were part of the boom crew, until the last log drive in 1971.

As soon as you step inside the boom house, you’ll be transported back in time. Numerous artifacts and belongings are displayed on the walls and the rooms are set up as if the workers are right there with you.

Time will quickly pass as you walk from room to room, fingertips slightly gracing the tables and furniture as your mind tries to imagine a day in the life of a river driver.

If you continue 21 miles up the Golden Road, you’ll come to the Chesuncook Boom House. Accessible by vehicle, this one is a more recent project and has only been open to the public for a handful of years.

The boom house and the white barn adjacent to it used to be located down at the present day Ripogenus Dam, a few miles down the lake. In 1916 crews moved the two buildings up the lake to the current location knowing that once Rip Dam became operational the structures would get flooded.

Chesuncook Boom House is larger compared with Ambajejus, and housed up to 24 men.

I’d love to share more details about the boom houses, but I would be remiss if I didn’t introduce curator and caretaker, Chuck Harris.

Harris grew up camping in the North Maine Woods, and when he turned 18, he went to work as a deckhand on one of the boats that towed booms back and forth on Chesuncook Lake. He worked in the field until the last log drive in 1971.

During his school years, Harris acquired a passion for art. He saw an opportunity to combine this passion with his love for the work he did on the log drives, and these boom houses are the result of that vision.

Preserving the boom houses is his token to the logging and river driving days — to the men who devoted their lives to the job, to those who lost their lives on the river, and for all those whose stories and hard work never got told or passed on. The boom houses are his way of making sure their stories are shared, and not forgotten.

If you visit the Chesuncook Boom House, you’ll have a good chance of seeing Harris. He’s in residence during the summer months as he continues to work on projects at the property.

He’s happy to show you around and share a backstory or two associated with the many old photographs tacked to the walls. He’s also content with taking a seat on one of the front porch chairs with you and reminiscing about the old days, and even offering his vision for the future of the boom houses.

He shared that it was peaceful working at the boom house, and that it still is today.

“Nothing has changed,” he said.

So, while our world continues to change with each passing day, Harris is doing his best to preserve history in a natural setting that has stayed the same through the years. I highly encourage you to visit and see for yourself.

For more information, or to make a donation to the West Branch Historical Preservation Committee, visit their website at https://themaineboomhouses.org/.