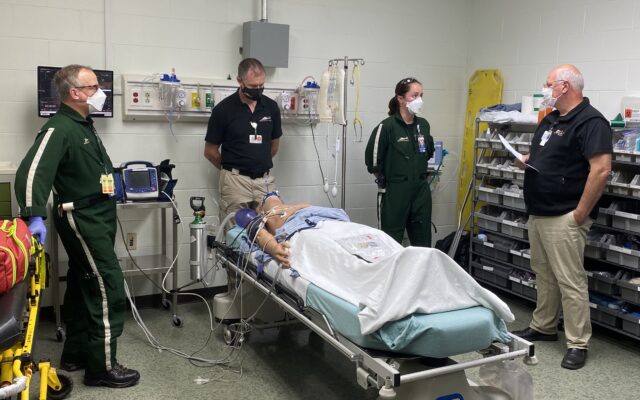 Contributed • July 18, 2022
By Kathleen O’Brien, Bangor Daily News Staff A new simulation training lab in Bangor will give emergency care training to first responders in a life-like setting, better preparing them for situations in the field. LifeFlight of Maine, the state’s only air medical and critical care transport organization capable of bringing advanced care and equipment directly to critically ill and injured patients, unveiled a new simulation training lab in its Bangor base on Tuesday.

A new simulation training lab in Bangor will give emergency care training to first responders in a life-like setting, better preparing them for situations in the field.

LifeFlight of Maine, the state’s only air medical and critical care transport organization capable of bringing advanced care and equipment directly to critically ill and injured patients, unveiled a new simulation training lab in its Bangor base on Tuesday.

The lab is designed to offer hands-on, realistic critical care training to Maine paramedics and nurses using simulation technology, according to the organization. Repeated simulation training is fundamental in preparing first responders to give immediate care to patients when and where they need it most, Thomas Judge, executive director of LifeFlight said.

The advanced training facility can also be used by other agencies, such as community fire and rescue departments. Giving teams in rural Maine access to lifelike scenarios can save lives, as they’re often who respond to emergency situations before LifeFlight arrives.

“All of the skills we’re able to do as LifeFlight clinicians, we’re able to practice those in a very safe environment,” Chuck Hogan, chief clinical officer for LifeFlight of Maine said. “None of us get it right the first time and I’d rather do those practices on a manikin that I can’t harm than on a patient. We train for the things we never want to happen so we can handle those situations when they do happen.”

The new lab contains a human manikin – a full body patient simulator – capable of breathing, talking and displaying lifelike symptoms and conditions that emergency medical technicians could see in the field. The manikins also react to different treatments and interventions first responders administer.

Training simulations begin with crews getting a call with a few brief facts about the patient they’ll be working with. A crew then enters the room and begins treating the patient based on the symptoms and behavior the manikin displays and their vital signs.

When the crew finishes the treatment, they discuss their thought process with LifeFlight educators.

Each simulation is recorded, allowing educators to immediately review a situation with students to discuss what they did correctly and what needs to be improved.

“In medicine, we have a lot of classes we take, but until we actually train in doing that, we’re probably not prepared,” Steve Babin, senior clinical educator for LifeFlight said. “Here, we have people repeatedly perform a skill until they get it right every time.”

For Kelsi Story, a critical care flight nurse who started training with LifeFlight in February, using a simulation manikin has been an “invaluable” element in her training. She said she has worked with manikins that didn’t display symptoms or respond to treatments, meaning students had to imagine the scenario.

Before LifeFlight of Maine had its own designated, permanent training lab in each base, training crews would often borrow similar training labs in hospitals, Hogan said.

LifeFlight cared for more than 2,300 patients in 2021 – about one patient every four hours – and has transported more than 34,000 patients since it was launched in 1998, according to the organization.

Each helicopter, airplane and ground vehicle is designed to be a mobile intensive care unit capable of caring for everyone from premature infants and cardiac and stroke patients to people with complex traumatic injuries and burns.

Similar training labs, funded by a $250,000 donation from the Bangor Savings Bank Foundation, were also built in the organization’s Lewiston and Sanford bases. The labs are virtually connected as well, lead instructors can orchestrate training programs from one site and smaller training groups can practice at each education lab.

The simulators are also mobile, which allows the nonprofit to provide programs on remote islands, at fire stations and at community hospitals, bringing advanced medical education directly to Maine’s rural communities. The manikins also have batteries, so clinicians can practice caring for a patient while in motion in one of their aircraft.