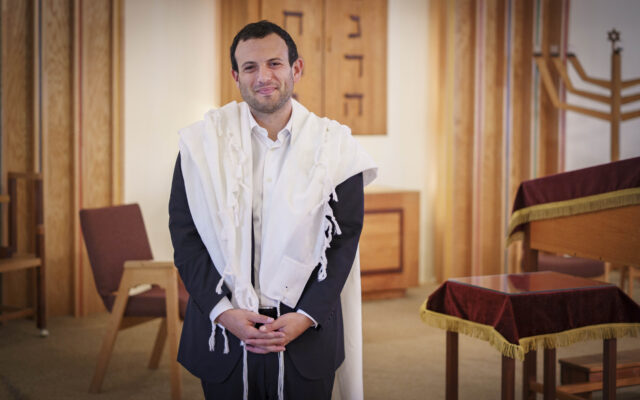 There’s a new guitar-playing rabbi in the Queen City.

Rabbi Sam Weiss, 31, took over the spiritual leadership of Congregation Beth El, the Reform synagogue on French Street in Bangor, on July 1.

Weiss replaces Rabbi Emerita Darah Lerner, who retired last month after serving the community for 17 years. Lerner was affectionately known as “the” rabbi of Bangor, despite there being two or three other rabbis in town during her tenure.

“Rabbi Lerner has been incredibly kind and supportive during the transition,” Weiss said Thursday. “It is clear she is responsible for the radical welcome this congregation expresses, which makes it inclusive for all regardless of their backgrounds.”

Lerner, now 62, replaced Rabbi Larry Milder, known as the singing rabbi. Milder went on to write and record Jewish themed songs. He often played his guitar and sang during services. Weiss’ guitar on Thursday rested on a chair toward the back of the worship area in the shul. He will be “going on tour” this summer to Down East Maine to meet congregants who live outside Greater Bangor.

Weiss’ predecessor, Lerner, was instrumental in bringing together Jews, Muslims, Catholics, mainline Protestants and evangelicals for events such as the 10th anniversary of the Sept. 11 terrorist attacks and a 2018 service to acknowledge that the opioid epidemic has left the community wounded and to pray for healing.

Beth El’s new rabbi said that he and the congregation are committed to continuing that work.

“We want to continue that interfaith dialogue and build authentic bridges between faith communities,” Weiss said.

Weiss grew up in Andover, Massachusetts, and attended a Reform synagogue there. He was thinking about playing music, not about attending rabbinical school.

“Other people saw a rabbi in me but I didn’t see one,” he said.

It was “a crisis of purpose” in his mid-20s, after he’d earned an undergraduate degree from the University of California Berkeley that led Weiss to satisfy his curiosity about Judaism. That led him to rabbinical school and Weiss was ordained in May, three months after he was hired by Beth El.

“This congregation seemed like an obvious fit for me,” he said. “I was energized by them and felt very comfortable here. There is a ‘do it yourself’ ethic here that felt very familiar to me from my years playing with bands in bars, restaurants and small halls.”

Synagogue President Melinda Wentworth described Weiss as “young, astute and compassionate.” She said Thursday that she is hopeful that having a young rabbi with a family will attract young families to the aging congregation.

“We are looking forward to being on this spiritual journey with Rabbi Weiss,” Wentworth said.

Rabbi Bill Siemers of Congregation Beth Israel, the Conservative synagogue on York Street in Bangor, also plays the guitar. Siemers said that he anticipates there will be rabbinical jam sessions.

Weiss, whose parents now live in York, said that during the interview process, Beth El’s congregants were fascinated to learn that Weiss’ maternal grandfather Ted Brother managed a now-defunct tannery in Dover-Foxcroft, he said.

Now a resident of Naples, Florida, Brother spent the week in Piscataquis County, then headed back to Andover for weekends while Weiss’ mother was growing up. The tannery sold leather to Dexter Shoe and other shoemaking firms, Weiss said.

In addition to graduating from the New York Campus of the Hebrew Union College-Jewish Institute of Religion, being ordained and getting the job at Beth E over the past year, Weiss got married in York, Maine, in September. On Feb. 22, he and his wife Erin welcomed their first child, Milo. The family lives in Bangor.