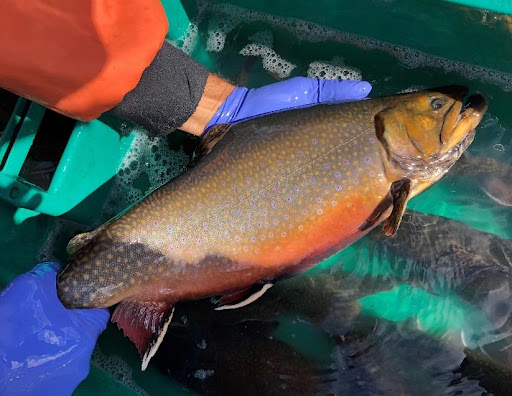 Contributed • July 7, 2022
By Leighton Wass June and July’s strawberry season is eagerly awaited by us shortcake lovers. At the same time of year, many of us fly anglers also look forward to another “season” — the Hex hatch, or as many Mainers call it, the Green Drake hatch.

June and July’s strawberry season is eagerly awaited by us shortcake lovers. At the same time of year, many of us fly anglers also look forward to another “season” — the Hex hatch, or as many Mainers call it, the Green Drake hatch.

This long-awaited hatch is generated by a huge mayfly that scientists named Hexagenia limbata. It belongs to a group of mayflies in which the nymphs burrow into the bottom sediment of many Maine lakes and ponds. After two years of living benthically, the almost 2-inch nymphs swim to the surface hatching into elegant Hex mayflies called duns.

The females are about 2 inches long, counting the two tails and body, while the males are a bit shorter. Both sexes are colored with shades of yellows and tans. Sorry folks, no green on this species.

Confusion reigns supreme with some mayflies since fly fishers also use the word “green” to name several other species of a similar size. One of those, the Eastern Green Drake (Ephemera guttulata) is also commonly called a Green Drake, but it is not the same critter.

The sure-fire way to tell the difference is to count the number of tails: adult Hex mayflies have only two tails, whereas the Eastern Green Drake has three tails. (Mayfly photos are often mislabeled on the internet).

Compounding the problem is that both species often overlap at the same time of year when hatching, although Maine has very few waters that harbor the limestone-loving, three-tailed Eastern Green Drakes.

Why get so excited about the Hexagenia (Green Drake) Hatch? It’s because these super-sized mayflies offer a pretty darn good package of protein, and that brings super-sized fish to the surface like a magnet. And that means fly fishers have a chance to land trophy trout on a dry fly. In my mind, it rarely gets better than that. I call it Hexitis.

Adult Hex mayflies only live for about two days, and during that time, the Hex duns transform into their last phase, called a spinner. The male and female spinners mate in a ritual flight, followed by the females depositing their eggs into the water, and then both adults die. The life cycle continues as the eggs hatch into nymphs that tunnel into the bottom silt and mud.

When can fly anglers expect to see Hex mayflies? Reports from the Greenville area indicate the hatch has already started on local ponds, showing up during the week of June 20. Hex hatches on small, shallow ponds occur first, with deep lakes and high elevation waters happening a little later.

In past years, the last week in June and the first week in July were always good bets but, more recently, the tendency has been for this hatch to commence earlier in the year. I believe it’s because of that bugaboo — climate change.

The two most important factors that determine hatch onset and hatch length (in days) is the ambient air temperature, which then determines water temperature. Several days with significantly high temperatures (80-90 degrees Fahrenheit) usually means an earlier starting hatch, whereas cold, rainy weather tends to delay it.

Blast furnace heat during the hatch usually brings it to a short ending, a week or less, but more typically it lasts 10 days to two weeks. I have found that most Hex hatches begin when surface temperatures are between 65-70 degrees.

Hexagenia mayflies are eaten by all kinds of fish, in both the nymphal and adult stages, but in Maine, the fish species most often targeted by fly anglers is the squaretail trout.

There is a downside to fly fishing this hallowed hatch. The majority of Hex mayflies come off the water near dark, and the amount of time to land fish when they are rising is short, maybe 15 to 30 minutes if you are lucky. As a result, an angler needs to be fully prepared and should not waste time during the hatch tying on new flies or untangling fly lines and rods. If using a canoe, I recommend taking two fly rods that are all ready to use. When I fish from a boat, I take three fly rods all rigged for action. Time is of the essence during this hatch!

Using dry flies is the classic way to fish for salmonids during a Hex Hatch, but I don’t always find them to be that fussy. Every Hex angler has a favorite fly, but the truth is, many different flies catch fish during this hatch. A few favorites are Wulffs, Comparaduns, Hex Dry Flies, Hex Emergers, Hex Rubber Legs and Stimulators. Hex Nymphs can also fool trout both before and during a hatch, using either a sinking line or floating line on a 9 1/2-foot fly rod.

While fishing this hatch, be sure to lead cruising fish when casting, check the fly every so often for tangles, and if you have the patience, cast and wait … and wait … for the fish to come to you. It does work. Also, take plenty of bug dope and don’t bother with the Solunar Table.