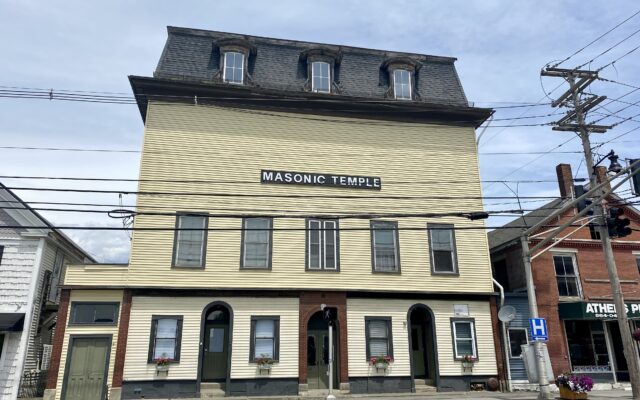 Valerie Royzman • July 6, 2022
DOVER-FOXCROFT — New owners of the Masonic Temple Building in downtown Dover-Foxcroft plan to restore the more-than-century-old structure and convert it into business and housing space. Years ago, the building had large storefront windows and housed local shops — something brothers Kevin, Robert and Steve Jankunas plan to bring back to enhance the downtown.

DOVER-FOXCROFT — New owners of the Masonic Temple Building in downtown Dover-Foxcroft plan to restore the more-than-century-old structure and convert it into business and housing space.

Years ago, the building had large storefront windows and housed local shops — something brothers Kevin, Robert and Steve Jankunas plan to bring back to enhance the downtown. They bought the structure at 54 East Main St. in March.

The brothers’ plan saves a historic building and provides retail space and much-needed housing in Piscataquis, Maine’s poorest and one of the most rural counties.

Like others opening new businesses and flipping spaces in Maine, the Jankunas brothers saw an opportunity for a modernized, mixed-use building that also preserves unique architectural features. They plan to transform the Masonic Building — built in 1869 and dedicated in 1870 — into retail and office space on the first floor and apartments on the second and third floors, Kevin Jankunas said.

“When we met with the Realtor, we were like, ‘Wow, this building is pretty amazing and has some great potential,’” he said.

The new owners plan to update the facade and renovate the first floor, which would likely house three businesses, in the next year. That includes updating vinyl siding that is in poor condition and opening up windows on the lower level, plus electrical and other maintenance work, Kevin Jankunas said.

Renovating the second and third floors calls for some creativity because the third floor features a large, open space, he said. A sizable luxury loft might work there, but the Jankunases are still brainstorming and will work with contractors and architects to identify the best use of the space, he said.

The previous owner of the building, who acquired it about five years ago, did not make any improvements to the historic structure, he said. The man then died, so the Jankunas brothers bought the building from his estate.

The Masonic Association paid roughly $10,000 a year for heating and electricity because it used the space for lodging and other purposes, Boone said.

“It comes down to economics for us,” he said. “It is a big building, and it is very, very expensive to heat. We’re all getting older and we have a lot of stairs to climb.”

Years ago, the association had several hundred members, Boone said. Now there are between 70 and 80, including some younger members.

The building, constructed by Isaac Meder, was home to office and retail shops on the first floor and doctors’ and lawyers’ offices on the second floor, said Chris Maas, a director at the Dover-Foxcroft Historical Society. The third floor was the Masonic Hall, he said.

“Originally, and for a very long time, George Meder had his watch shop there,” he said, noting the building has seen many tenants over the years. “Next door was Elmer Cole’s drug store. On the other side, usually clothing stores [and] sometimes grocery stores.”

The Charlotte White Center — an agency that provided social services to people affected by cognitive or developmental disabilities, mental health challenges and brain injuries — made a home there in the late 1970s.

The masonic association has temporarily moved across the street to a space above the Dover True Value Hardware store. Members will meet there for about two years while they work on raising funds to build a new single-floor lodge in Dover-Foxcroft, Boone said.

“I think that it [the Masonic Building] has gone to very good ownership,” he said. “It may take some time, but down the road you’ll see a big improvement.”

The new owners are taking a downtown revitalization plan, completed in 2003, into consideration as they pursue the project. The study mentions the Masonic Building as a strong focal point in town, noting “every effort should be made to revitalize and restore this building as a historic downtown element.”

The building’s second and third floors have unique characteristics, such as inlays on the hardwood flooring, that the Jankunases will try to preserve and incorporate into their project.

“You feel a sense of responsibility to make sure to do the right thing and bring the building back to life,” Kevin Jankunas said.

Contributed photo LIFETIME OF SERVICE — Dover-Foxcroft Fire Chief Joe Guyotte, pictured with family members during a surprise presentation, was recognized with the Lifetime Achievement Award at the 58th Maine State Federation of Firefighters Convention in Fryeburg, which was held Sept.