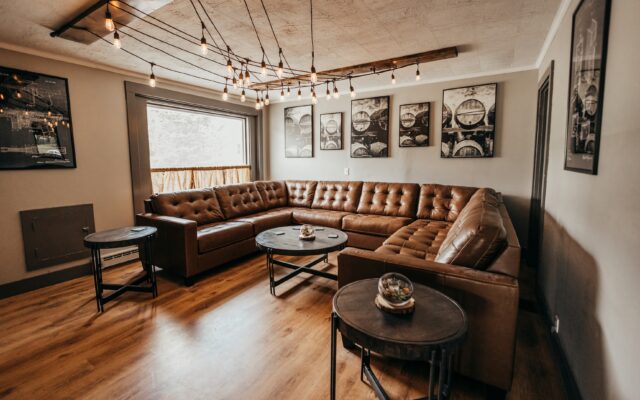 Young restaurateur to open cocktail and dessert lounge in Dover-Foxcroft

Valerie Royzman • June 30, 2022
DOVER-FOXCROFT  — A 24-year-old restaurant owner who started his business during the COVID-19 pandemic is investing in Dover-Foxcroft with a second enterprise. Tejai Lee, who opened Chew 62 in the small, rural town with limited dining options, will soon unveil Tap 62: The Lounge.

DOVER-FOXCROFT  — A 24-year-old restaurant owner who started his business during the COVID-19 pandemic is investing in Dover-Foxcroft with a second enterprise.

Tejai Lee, who opened Chew 62 in the small, rural town with limited dining options, will soon unveil Tap 62: The Lounge. The cocktail and dessert lounge at 920 West Main St. opens on Friday.

The young entrepreneur took a sizable risk by opening a restaurant in December 2020 amid the pandemic, but it appears to have paid off as he gets ready to bring another modern and elevated hangout spot to Dover-Foxcroft. It’s an interesting business move in a region from which young people tend to leave for more urban communities and job opportunities.

“The whole idea is that people can come have a nice dinner at Chew 62 and go have a nightcap or some nice dessert over here,” Lee said, noting that quality service and presentation will be critical elements for Tap 62. “It’s a lot more chill [than Chew 62].”

The new space — with its brown leather couches and chairs, coffee tables, decorative string lighting and a relaxed aesthetic — is just what the town needs, Lee said. The lounge, which will be open several evenings a week, will offer small plates, upscale cocktails and classic beverages, plus milkshakes and desserts.

The lounge won’t have the feel of a typical bar, of which there are several in town, Lee said. Families with children are welcome, and patrons can enjoy certain offerings, like milkshakes, as both classic or boozed-up versions.

“The space brings a little more culture to the area,” Piscataquis Chamber of Commerce Executive Director Denise Buzzelli said. “It’s the type of thing you’d find in a city [like Bangor] and you wouldn’t find in a small town.”

Tap 62 will offer a selection of wines, cocktails with a creative twist and classic and local craft beers on tap, such as those from Monson-based Turning Page Farm and Bissell Brothers Brewing in Milo and Portland. Lee is working with the Craft Beer Guild to bring in more options.

Small plate offerings will include Ahi tuna nachos, bacon-wrapped scallops and blooming onions, Lee said. He plans to build a rotating menu that keeps favorite dishes and drinks constant, along with seasonal options, especially for holidays.

The 62 in Chew 62 — and now in Tap 62 — is inspired by a Bible verse from Galatians 6:2: “Bear one another’s burdens, and so fulfill the law of Christ.” Lee was moved by the verse because he cares about people and serving the community, he previously told the Piscataquis Observer.

Lee, who lives in Corinth, spent the last 10 years or so living in Bangor and working in restaurants. He was attending the University of Maine to study chemical engineering but left that after realizing that cooking was his passion. Losing his restaurant job in 2020 pushed him to open his own place.

“It was something that I fell in love with,” he said. “I loved the idea of always having something to eat and having people around and creating something communal.”

Lee grew frustrated by shortfalls in the restaurant industry and saw that management often didn’t appreciate and respect its employees, he said. He later realized he could provide good local jobs and be his own boss, all while allowing staff to attain employable skills.

It isn’t always easy to open a new business, and the small-town mentality can sometimes be a hindrance, said Buzzelli, who is also Lee’s future mother-in-law. Lee has dreamed of establishing himself in the restaurant industry, and he has used his entrepreneurial spirit to implement his ideas, she said.

“The one thing that I think is great about how his mind works is he looks for needs that aren’t being met — what isn’t available right now in Dover-Foxcroft [and] what people aren’t able to find with the current offerings,” she said. “He didn’t want to open just another bar. He wanted it to be something very different.”

Lee’s push for a second business a short time after the first one opened could be viewed as a premature decision, but he said he knows strong businesses help sustain small communities.

“Sometimes an idea comes up and you just have to go for it,” he said.
For information, visit Tap 62 on Facebook. A grand opening is scheduled at 5-7 p.m. Tuesday, including a ribbon cutting at 6 p.m.