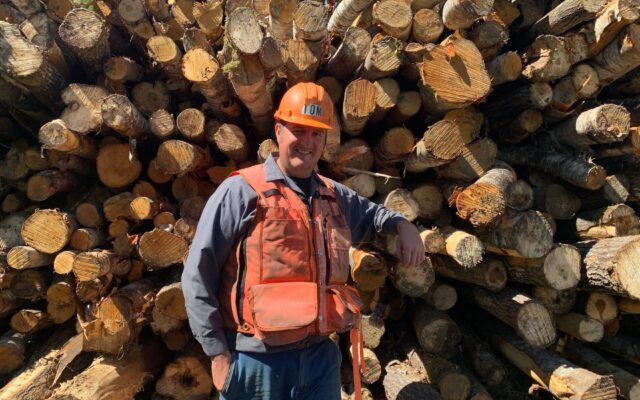 Contributed • June 8, 2022
By Nicole Ogrysko, Maine Public Thomas Douglass usually looks forward to the end of spring mud season, when most independent loggers like himself return to the woods after a month-long break. But this year, he said, was different.

Thomas Douglass usually looks forward to the end of spring mud season, when most independent loggers like himself return to the woods after a month-long break.

But this year, he said, was different.

“It was the least I ever looked forward to going back to work after mud season, let’s put it that way,” he said.

Douglass estimates the cost of running his business has gone up between 20 percent and 30 percent over the past two years, and especially in the past six months.

But he’s back in the woods, checking on his crew that’s clearing white birch and other trees for pulpwood on a 67-acre plot in Parkman. He has four people working for him now, but he’d like to have three more — if he could find the talent and pay them enough to take the job.

Equipment costs, he added, are soaring as well.

“That machine there, I was told the other day by the equipment dealer I bought that machine from — I don’t know if it was worth it or not — but it cost another $80,000 higher a year later,” Douglass said, pointing to a harvester that was grabbing and cutting trees in the distance. “On a machine that was plenty expensive in the first place.”

The Professional Logging Contractors of Maine surveyed its members earlier this winter. They estimate operating costs have gone up an average of 24 percent over the past two years on everything from tires and hydraulic filters to brake parts and labor.

And that’s before the price of diesel fuel doubled to more than $6 a gallon in Maine in just the last year.

Douglass said because of supply-chain challenges, local stores no longer seem to carry what they used to and the wait times to ship the parts are unreliable.

“Every day you’re waiting for a part is a day you lost, because you just can’t make it up,” he said.

Most mills in Maine are now paying loggers a bonus to offset the cost of fuel, and some are paying slightly more now for fiber.

That’s helped, but the volatility is forcing loggers to leave the industry, scale back their operations or retire, said Dana Doran, executive director of the PLC.

A handful have taken buyouts from a mill that’s starting its own logging crew, he said.

“They have either shut down. They have seen employees leave for greener pastures and they haven’t been able to replace them, so they don’t,” Doran said. “Or they’ve moved into other occupations. They are trucking other commodities. They might be trucking water or they’re trucking finished lumber.”

Economists believe forest products markets will eventually adjust and that more mills will either have to pay more for wood or watch loggers leave the business.

Doran said there are already worrying signs that Maine’s loggers are losing capacity.

“I’ve heard from probably every commodity mill in the state, whether it’s a pine mill or a spruce fir mill or a pulp and paper mill that their yards are empty,” he said. “And they’ve been empty for most of the spring. I’ve heard pulp and paper mills who are shutting down every day by 1 or 2 p.m. because they’re getting so little wood delivered through their gate.”

For Jim Robbins, who runs a white pine sawmill in Searsmont with his siblings, that’s a worrying prospect.

“That’s one of the things that keeps me up at night,” he said.

Robbins Lumber hasn’t shut down early due to a lack of raw fiber, he said, but he’s heard about it happening to others.

Robbins said he tries to sell diesel directly to loggers to cover their trucking costs. And he’s paying more now for the logs and fiber that his independent contractors bring to his mill, he said.

But operating costs for labor, parts and diesel have gone up for his business as well.

He’s hopeful that Maine’s industry is poised for the arrival of new forest products in the coming years, such as wood fiber insulation, which Robbins said should create a greater demand for pulpwood.

Efforts are underway now to make those products in Maine, but they’re not quite ready for mass production.

If they do take off some of the loggers who are scaling back now say they want to stay ready to ramp up again in the future.

And for Thomas Douglass, he’s too young to retire at age 32. He might sell one of his logging machines that’s sitting in the garage, if he can’t find and hire the crews to operate it. But he said he’ll continue to work in the woods despite the challenges.

“I would say it’s surviving, definitely not thriving,” Douglass said of his business. “But surviving and probably just that.”

Whatever happens to the forest products industry, Douglass said he hopes it can remain strong enough to eventually entice his young sons into the logging business.