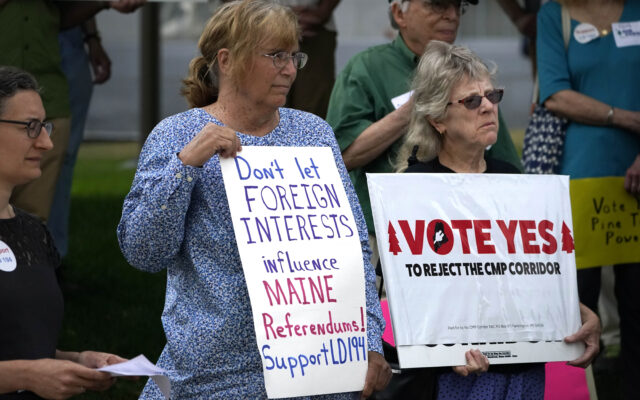 Contributed • June 5, 2022
By Jared Golden and Rick Bennett  American voters should decide American elections. Republican or Democrat, Libertarian or Green, unaffiliated or independent, that’s something that all Mainers of every political persuasion should be able to agree on.

By Jared Golden and Rick Bennett

American voters should decide American elections. Republican or Democrat, Libertarian or Green, unaffiliated or independent, that’s something that all Mainers of every political persuasion should be able to agree on. And we should stand together to stop foreign interests from placing a finger, or a pile of cash, on the scales of our democracy.

That’s why we — a Democratic congressman and a Republican state senator — are working together to confront a national issue that has already impacted us here in Maine: foreign corporations and governments are spending money to win elections in our state and around the country.

Mainers got a front-row seat to this issue last year. Our TV screens, radio waves, and mailboxes were drowned in an advertising landslide to promote the Central Maine Power corridor project. Hydro-Quebec, a corporation owned entirely by the government of Quebec, would have made billions of dollars from the proposed energy corridor. So they loosened Canadian purse strings to persuade Maine voters that it was in our best interest to approve the project. In the run-up to the ballot initiative on the CMP project, Hydro-Quebec poured more than $22 million into pro-corridor efforts — more than twice the previous record for spending in a referendum campaign. Whatever you think of the CMP corridor, the decision should be made by Mainers, not a Canadian province.

Interference with our elections won’t stop with Hydro-Quebec. It’s not hard to imagine Norwegian owners of the now-paused American Aquafarms salmon farming operation in Frenchman’s Bay or foreign owners of land in Maine spending vast sums of money to affect outcomes at the ballot box.

We welcome new Mainers, and foreign investment is always encouraged and appreciated in our state. Our effort is specifically targeted at the foreign governments that are taking advantage of a loophole in federal election law to manipulate our elections.

That’s why we’re working across the aisle to support Protect Maine Elections, a nonpartisan ballot initiative co-led by one of us — Rick Bennett — to ban foreign governments and foreign government-owned companies from spending money to influence the outcome of Maine elections.

This issue of foreign entities spending in U.S. elections unfortunately has been popping up across the country. For example, in 2018, an Australian mining company helped fund a campaign that defeated a Montana ballot measure that could have threatened that company’s future profits. To us, this isn’t an issue of whether mining is good or bad for Montana or any other state but about whether foreign companies should be allowed to influence our elections.

In November 2021, the Federal Election Commission announced a ruling in that Montana case: While federal law prohibits foreign entities from spending in elections for public office, it doesn’t ban foreign funding of ballot question campaigns. This is a glaring loophole with national repercussions.

Protect Maine Elections would help immediately close that loophole here in Maine, and one of us — Jared. Golden — is working with a bipartisan group of lawmakers to ban foreign funding of ballot question campaigns nationwide. They introduced the Stop Foreign Funds in Elections Act earlier this year and have worked to build support from lawmakers across the country from both parties.

We’re focusing on stopping foreign money from influencing ballot initiatives because it’s an issue we can make progress on right now. But it’s part of a larger battle to confront the corrupting power of big money in our elections — foreign or otherwise — that goes well beyond ballot initiatives.

Big money threatens to drown out the voices of regular Mainers, even when it comes from corporations, wealthy individuals and special interest groups inside the U.S. In Maine’s 2020 U.S. Senate race, for example, campaigns and outside groups spent an earth-shattering $185 million.

The floodgates to this out-of-control political spending were opened by the Supreme Court’s disastrous Citizens United ruling, which will take a constitutional amendment to overturn. The Protect Maine Elections ballot initiative also includes a resolution calling for an amendment to allow Congress and the states to impose reasonable limits on campaign spending, and Golden is a co-sponsor of a similar amendment in Congress.

We harbor no illusions that passing a constitutional amendment will be quick or easy. But right now a real, tangible step to stop foreign governments from spending money in state elections is within our reach if we come together.

The Protect Maine Elections initiative needs signatures to get on the ballot and we need your help. You can learn more and sign up to volunteer at https://www.protectmaineelections.com/.

Golden represents Maine’s 2nd Congressional District in the U.S. House of Representatives. Bennett of Oxford is a member of the Maine Senate, where he serves on the Government Oversight Committee.