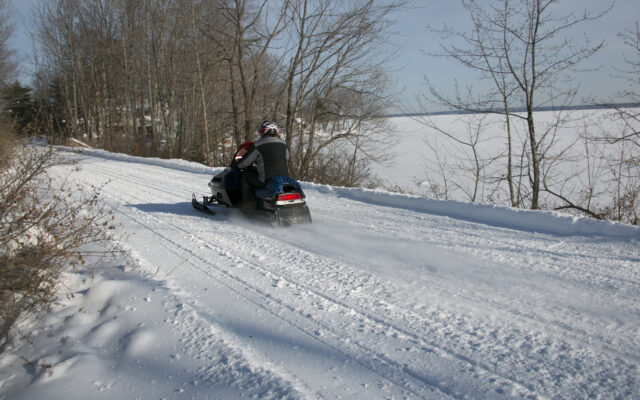 Valerie Royzman • June 3, 2022
NEWPORT — Camp owners and residents are concerned that a dark dust stirred up by recreational vehicles on a nearby multiuse trail and settling on their properties and Sebasticook Lake could be harmful to their health.  Miles of old railbeds have been converted into trails for recreational use across Maine.

NEWPORT — Camp owners and residents are concerned that a dark dust stirred up by recreational vehicles on a nearby multiuse trail and settling on their properties and Sebasticook Lake could be harmful to their health.

Miles of old railbeds have been converted into trails for recreational use across Maine. Newport residents, including those living along the 29-mile-long converted railbed of the Four Seasons Adventure Trail from Newport to Dover-Foxcroft, have complained about the dark dust for several years, and the town recently sent a sample for testing, Town Manager Jim Ricker said.

The black dust is the latest environmental concern for a lake that has had contamination problems over the years, and for the health of those who live around it. Sebasticook Lake was polluted with phosphorus starting in the 1950s from mill waste, irrigation practices and roadway construction. Cleanup began in the early 1970s. The lake is still considered impaired.

But the dust has gotten worse, and Ricker said the increased use of the trail due to the pandemic — including four-wheelers — is the likely reason. The dust, which Ricker said looks like granulated coal, could be coal ash, the waste left once coal burns. Early trains used coal for fuel.

Coal ash, one of the largest types of industrial waste generated in the United States, contains contaminants such as mercury, cadmium and arsenic, which is why the U.S. Environmental Protection Agency has to regulate it. Without proper management, the contaminants can pollute the air, waterways, ground water and drinking water, according to the agency.

Although coal ash is produced primarily from coal-fired power plants, various types of contamination can be found along rail corridors, according to Rails-to-Trails Conservancy. Sometimes contamination is residual along a stretch of the corridor, and other times it’s associated with industrial uses.

Rails-to-Trails Conservancy lists coal ash and cinder containing lead and arsenic as one of the types of contaminants, along with herbicides, fossil fuel combustion products, spilled or leaked liquids like gasoline and others.

Possible health hazards from coal ash include skin, respiratory, eye and throat, and other irritations, according to the Agency for Toxic Substances and Disease Registry. Some compounds found in it can cause cancer after continued long-term inhalation and ingestion, the agency said.

The town has sent a soil sample to the University of Maine to analyze what chemical compounds are in the soil and whether they are harmful to people or the environment, Ricker said.

“Living there and watching that for the last five years, I can tell you that there are days when I can’t even see across the trail and the dust is settling on the water,” Ricker said. “You can go out and see it slowly go down into the water column.”

The Four Seasons Adventure Trail follows the old railbed of the Dexter and Newport Railroad, which blazed north in 1868, according to Rails-to-Trails Conservancy. The Maine Central Railroad later leased the line and extended it to Foxcroft in 1889. The Foxcroft branch of the railway, which transported wood products, ceased operations in 1993. The state later bought the corridor for recreational use.

About a half-mile of the gravel-surface trail appears to be the area of concern in Newport, Ricker said.

Ricker said the state’s solution is to give more calcium to those with complaints so they can put it on the railbed, which the Maine Department of Agriculture, Conservation and Forestry owns. This doesn’t fix the problem, but acts as more of a Band-Aid, he said.

The town has also consulted with Jennifer Jespersen of Ecological Instincts, who is the town’s environmental firm partner for a watershed study. She helped the town apply for a grant from the Maine Department of Environmental Protection, which is pending.

Jespersen hopes to take a significant number of water samples along the trailhead when she monitors the lake this summer, Ricker said. Regardless of whether Newport is awarded the grant, she made suggestions about water testing.

Ricker said that town officials and residents are concerned that the lake hasn’t improved at a good rate and want to know why.

A neighbor suggested that the majority of the dark dust is on the lake’s shore because people used to dump coal ash there, he said. It makes sense that people would deposit hot ash near a body of water, rather than in a forested area where a fire could start, but this is speculation, Ricker said.

While more recreational activity is good for the economy and most people tend to be respectful of the trail, stronger enforcement of rules and environmental safeguards could be put in place to help keep the dust down, Ricker said. He suggested enforcing speed rules or resurfacing the trail, but the town needs test results before it can make any decisions.

“If I said we’re going to have a public meeting to talk about dust concerns, we would fill this room [at the town office],” he said. “People feel like they have no power, I think. It’s a state trail.”