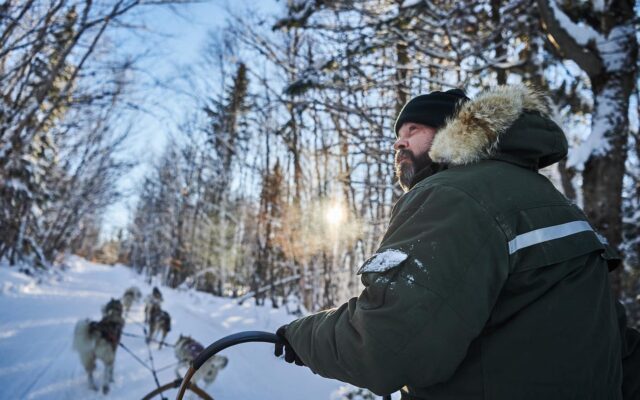 Aroostook musher trying to be first to dog sled to Katahdin peak, but no-pet policy in way

ST. DAVID — A St. David musher has not given up on his dream to be the first to lead a sled dog team to Mount Katahdin’s summit, but a no-pet policy at Baxter State Park may get in his way.

A sled dog team nearly reached the summit of Mount Katahdin more than 70 years ago. St. David musher Jonathan Nathaniel Hayes, along with his team of Seppala Siberian sled dogs, wants to achieve what that musher could not and be the first to reach the top of Katahdin.

Maine Gov. Percival Baxter (1921-1924) donated thousands of acres of forestland along the mountain to the state beginning in 1931, which later became known as Baxter State Park. It is independently funded and is not considered one of Maine’s state parks. Baxter left behind a nearly $7 million trust to maintain the land in its wild state, and stipulated that the commissioner of Maine Inland Fisheries and Wildlife, the director of the Maine State Forest Service and the state attorney general would operate as its governing authority — known today as Baxter State Park Authority.

There are several conditions on the use of the land, but Baxter’s wishes may not have included forbidding dogs in the park.

“Maine has a mushing history second only to Alaska,” Hayes said. “This Katahdin Expedition would serve to further enrich Maine’s mushing legacy and bring attention to its cultural significance to our state.”

Musher Perry Greene, accompanied by his team of Chinook sled dogs and a half dozen Boy Scouts, came within 1,000 feet of reaching the peak of Maine’s tallest mountain in 1951.

The expedition was held in conjunction with students from New Hampshire’s Phillips Exeter Academy mountaineering club, who were climbing Katahdin on cross-country skis.

The effort was thwarted when one of the Exeter students, traveling ahead of Greene and the Boy Scouts, became injured in an avalanche. Greene and his dog team transported the injured student back down the mountain to receive medical help, ending the expedition.

Hayes’ goal has been thwarted for a different reason. Baxter State Park, in which the crown of the mountain rests, doesn’t allow pets.

Hayes has requested special dispensation from park authorities for a sled dog-driven ascent of Katahdin on two occasions over the past decade but was denied, he said.

“The primary argument used by the park is that having a dog team in the park would not ‘be in keeping with the founder’s wishes for the park’,” Hayes said.

One of the Boy Scouts on the 1951 expedition was Greene’s grandson Peter Richards Sr., who was a seventh-grader at the time.

Richards, now in his 80s, said his grandfather knew Baxter well, and that Baxter sanctioned the mid-century sled dog trip up the mountain.

His grandfather would have achieved the goal if the Exeter student had not become injured, Richards said. Greene loaded up the injured student and went to Togue Pond Gate to meet a Millinocket ambulance, he said.

“An airboat on three skis had come part way to the base, turned around and tore up the trails,” Richards said. “When Grandfather hit the mess, the sled was torn up and required more repairs than we were equipped to do at Katahdin.”

Hayes, who said he has summited Katahdin six times using four different routes, said he has a well thought out plan in place to ensure the safety of everyone involved, including his dogs.

It will begin with a different route than what Greene attempted.

Hayes said he will organize a ski/snowshoe party to summit Katahdin ahead of him and his dog team to break a trail.

“Even if it is covered the following day by snowdrift, the traverse of the route the day before would be felt under the lead dog’s feet,” Hayes said.

Hayes is a former U.S. Marine and Maine forest ranger, is certified for wilderness first aid, teaches life sciences at the middle and high school levels and has 20 years of mushing experience.

Last year, Hayes and his dogs completed a more than 280-mile journey through the North Maine Woods in honor of the famed sled dog Togo, who led the charge to bring lifesaving antitoxin to the people of Nome, Alaska, during a 1925 diphtheria epidemic.

Hayes was also present this spring when his teen son Caleb Hayes shot and killed a moose that had attacked the younger Hayes’ sled dog team after returning from a practice run in preparation for the Can-Am Crown International Sled Dog Races in Fort Kent.

It was during a Can-Am dinner this spring that Hayes said he approached Gov. Janet Mills with the request that she help him get permission to lead his team to the Katahdin summit.

“Governor Mills graciously agreed to look over my proposed expedition and to share it with those who would ultimately make the decision,” Hayes said.
Hayes has written extensively about his proposed Katahdin expedition on his blog at www.mushmaine.com.