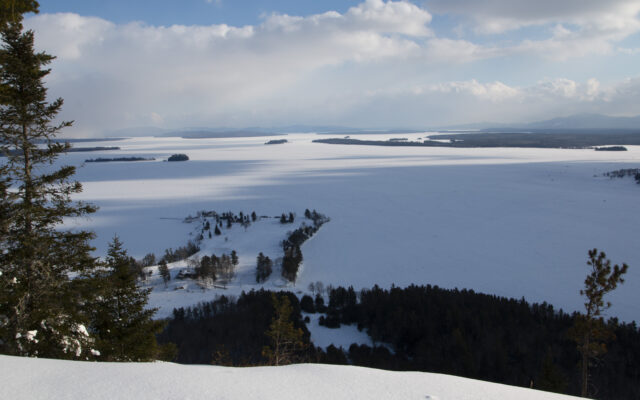 Contributed • May 16, 2022
By Robbie Feinberg, Maine Public Along the shores of Moosehead Lake, Roger Paradise revs the engine of a small 1964 Cessna 180 seaplane. Paradise is the chief pilot for Currier’s Flying Service, which has been calling the ice-out on the 40-mile-long lake since at least the 1990s.

Along the shores of Moosehead Lake, Roger Paradise revs the engine of a small 1964 Cessna 180 seaplane.

Paradise is the chief pilot for Currier’s Flying Service, which has been calling the ice-out on the 40-mile-long lake since at least the 1990s.

“I doubt there’s any ice left,” Paradise said from beside the plane. “Anything that has been broken up, we’ve had some pretty big wind and rain.”

It’s early May, and Paradise said the ice was officially declared out about a week ago — on April 28th, a bit earlier than usual. To make the declaration, Paradise flies over Moosehead to see if there’s enough open water for the steamship Katahdin to cross the lake, from Greenville to Northeast Carry.

“If the boat had to maneuver a lot, it’s not out,” he explained. “There’s still too much ice out there. It has to be able to go up there, smooth sailing, the entire way up.”

When Currier’s took over the job, it was continuing a nearly 200-year tradition, one that began in 1848. According to Sue Currier, anticipation builds each spring as the lake ice melts. Contests are held at local businesses, and people call her with the same question: When is the ice out?

“It is!” Currier said. “Because it’s an important date that you put down in history. So you want to be as accurate as you can.”

Currier and Paradise aren’t the only ice-out keepers in Maine. Records have been collected by generations of families, logging companies, general stores, and even dates etched onto barns. The tradition continues now, with volunteers still reporting the date each year.

“What’s so amazing about it to me is that it was not collected for scientific reasons, as far as I know, ever,” said Glenn Hodgkins, a research hydrologist with the U.S. Geological Survey based in Augusta.

More than two decades ago, Hodgkins began collecting historic ice-out data and looking at its relationship to air temperature and climate. Using records from 29 lakes, Hodgkins found that over 150 years, ice-out had gotten earlier by an average of nine days in northern and western Maine, and an average of 16 days farther south.

“But it’s proved, because of Mainers keeping track of it and saving over the years, it’s proved to be a valuable scientific record,” Hodgkins said.

Hodgkins said the trend could affect winter recreation, from snowmobiling to ice fishing. And Linda Bacon, the leader of the lakes assessment section within the Maine Department of Environmental Protection, said earlier ice-outs also have a big effect on biology — specifically, phytoplankton, which can start to grow and multiply much earlier once the ice thaws.

“When you have a lake that has more nutrients in it, than it really should have in it, that gives a greater period of time for algal populations to just totally take over,” Bacon said. “And you end up with lakes that are really kind of pea soup green for a longer period of time during the summer.”

Bacon said big algal blooms have already started to occur in lakes along the south and coast: at Long Pond in Parsonsfield; and Georges Pond, in Hancock County, where residents spent hundreds of thousands of dollars in 2020 to treat the water. Until about 20 years ago, Bacon said cooler temperatures helped to mitigate that risk. But she said shorter ice seasons, and warmer waters, will make it worse.

“It doesn’t take a whole heck of a lot for a lake to change,” Bacon said. “We have a lot of lakes in the state of Maine that are kind of right on the edge.”

For a large lake like Moosehead, Bacon said the concerns aren’t quite as urgent, because it takes the massive volume of water a much longer time to warm up.

But Tristan Taber, with Lake Stewards of Maine, said Moosehead won’t be immune from climate change. Taber said that if you extrapolate out historical trends, they show that the average ice-out could potentially occur about two weeks earlier by 2070, compared to about two centuries before. Add that to a likely earlier ice-in date in the fall, and Taber said the average ice season could potentially be cut by up to a month.

“There is the real possibility that there could be a risk here,” Taber said. “And that risk comes with thoughts of cyanobacteria blooms, with thoughts of less availability of environments, of habitat for cold water fisheries, and then the risk of invasive species being able to find a foothold.”

Taber and other experts say that to help mitigate those changes, local residents need to be stewards of their lakes and ponds. That means installing culverts near roads, adding vegetative buffers along lakeshores to help handle storm water, and carefully considering the effects of development and erosion near water bodies.

In the meantime, scientists say they’ll continue to rely on ice-out data — and the local ice-out watchers across Maine — to carry on the centuries-old tradition.

This story was provided through a media partnership with Maine Public.