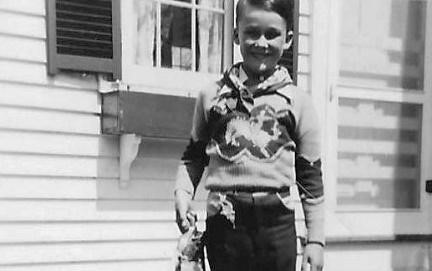 I’ve been trolling for salmon for 65 years. Here’s what I’ve learned.

Contributed • May 10, 2022
By Leighton Wass Yes, I am a fly fisherman, but hold your horses folks, because I also troll and even (gasp) use bait at times to seduce fish. I grew up in the 1950s learning to troll streamers for landlocked salmon with my father, Henry “Shorty” Wass, an icon (some of you elder statesmen might recall) on semi-professional basketball teams such as the Bar Harbor Black Cats and the Bangor Five Aces.

Yes, I am a fly fisherman, but hold your horses folks, because I also troll and even (gasp) use bait at times to seduce fish. I grew up in the 1950s learning to troll streamers for landlocked salmon with my father, Henry “Shorty” Wass, an icon (some of you elder statesmen might recall) on semi-professional basketball teams such as the Bar Harbor Black Cats and the Bangor Five Aces.

He also knew his fishing. We trolled for spring salmon in places such as Tunk Lake, East Grand Lake, Long Pond and Wilson Pond in Greenville.

This type of fishing was high on my whippersnapper enjoyment list (girls were first) — as long as we had action! Those reach-for-the-moon jumps, line-sizzling runs, jolting strikes and the beautiful greenish-silver hue, dotted with black spots, were all a big part of the salmon fishing charm.

My father’s favorite salmon streamers for trolling cold spring waters were the Grey Ghost, Liggett Special, Nine-Three, Red & White Bucktail, Mickey Finn and Pink Lady (actually more orange than pink) — all tandem flies. We always fished two streamers on each rod, giving us a better chance to “test the waters” with a variety of flies.

I find myself returning to some of those very same patterns 65 years later, especially the Grey Ghost and Pink Lady. I don’t think an angler can do much better than the Grey Ghost for salmon, but not all Grey Ghosts are the same.

Depending on the fly tier, they can range a great deal in color and modifications. I prefer those with the darker, slate gray hackles. I have also added streamers such as Jerry’s Smelt, Magog Smelt and several home-tied flies to my present-day salmon arsenal.

In the 1950s, we used trolling rods with small multiplying reels that were filled with black fishing lines made of Dacron, I believe. There were some fairly large swivels tied in at the end of the black line and the swivels were attached to a rather stout leader.

We trolled at a good pace with an extra rod stuck out over the stern with its fly in the boat’s slipstream and worked all the streamers by continuously yanking the rods. We trolled primarily off sand bars, stream tributaries and drop-offs close to shore, wherever there were smelts.

We landed our fair share of landlocks, and many of those fish ended up baked in my mother’s oven, after which a drenching of melted butter prepared them superbly for being wolfed down.

One tactic my father liked to use when things started to slow down was to hook a small smelt on the upper hook of a streamer. Oftentimes, a change like that would make all the difference, and in some lakes, it produced some nice squaretails as well.

One other trick he swore by (and sometimes at) was to dip the net in the water three times after the lines were all out. I believe he said that he had picked that up from fishing with a guide Down East.

Some anglers wear lucky hats to improve their fishing, and a few are worried about a bad day if there is a banana on board. I guess you can choose your own path to success, but you probably should know … this codger still dips his net on occasion.

More recently, the salmon in Moosehead Lake, the Moose River, Aziscohos Lake and Rangeley Lake have all been witness to my trolled streamers, as have several Vermont water bodies, Lake Champlain and Lake Memphremagog. Do I ever still love that jarring strike when a salmon hits, but folks, you have to be holding the rod to feel that adrenaline-producing lightning strike! Downriggers won’t do it. Rod holders won’t do it. Nor will the expensive gadgets that automatically do the yanking for you.

Today when trolling for springtime salmon, I prefer fly rods spooled with sinking fly lines. I still yank my fly rod to give the streamers a darting action (the strike almost always comes on the rod’s return stroke) and I continue to use that extra rod in the prop wash. I get as many strikes, and sometimes more, than the one over the side that’s long-lining. This gambit proved very successful for salmon and squaretails on Moosehead Lake last spring.

Another difference from my younger years of salmon trolling is the direction I troll. It’s never in a straight line anymore, but instead in a zigzagging pattern. That produces a change in speed of the flies from time to time, as well as sinking the flies a little or raising them on the turns to give them more of a bait-fish action.

That technique was further impressed upon me when fishing the Moose River in May several years ago. Several of the “old pros” were constantly angling back and forth across the river instead of fishing straight up the river or down, and they were by far the most successful trollers.

After chatting with one of these friendly gentlemen (thank you, Warren Hall), I also learned that when trolling a river during a smelt run, most fish will strike a fly during the downstream zig-zagging run, instead of the upstream route. Matter of fact, one savvy old-timer only fished downstream and then would zoom back upstream without trolling, turn around and start all over again.

I’ve said it before and will say it again, old-timers can be a huge wellspring of information.