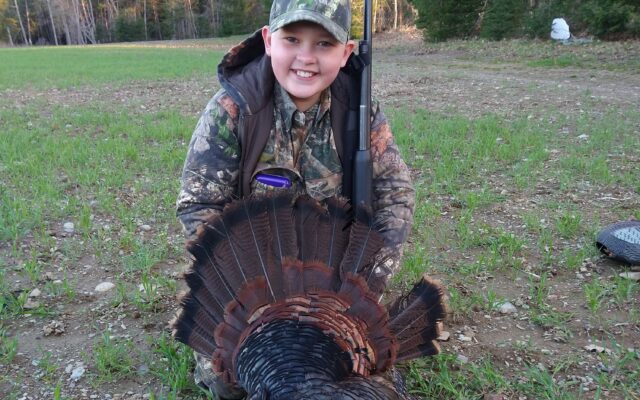 Contributed • May 8, 2022
By Pete Warner, Bangor Daily News Staff Mentorship and generosity were instrumental in a memorable youth day hunt for 10-year-old Gabe Picard of Pittsfield. Gabe and his dad, Dana Picard, along with Dana’s uncle Doug Libby, set out on a Saturday intent on harvesting a turkey.

Mentorship and generosity were instrumental in a memorable youth day hunt for 10-year-old Gabe Picard of Pittsfield.

Gabe and his dad, Dana Picard, along with Dana’s uncle Doug Libby, set out on a Saturday intent on harvesting a turkey.

They rose at 5:30 a.m. and headed to Exeter, where family friend Steve Colbath had invited them to hunt. It was the same property where Gabe previously had shot his first deer.

The trio walked to the blind together, but Doug hung back and handled the calling duties.

“After only about 20 minutes, four big toms came in to our decoys,” Dana Picard said. “Unfortunately, we didn’t get any of those four birds.”

Dana said the group stuck it out and sat patiently for much of the day, taking time out only for a quick breakfast.

Their patience paid off.

“Later that afternoon when we were getting ready to leave I received a text from our great friend, Steve Colbath, whose land we were hunting on, that we had a big tom heading our way,” Dana said.

The group wasn’t able to see the bird, but Steve had watched it from his house and saw it headed in their direction.

“Sure enough, within two minutes the tom made an appearance,” Dana said. “He was after the hen that had just passed us a few minutes earlier.”

The turkey arrived at the decoys and put on a fancy display of its tail feathers, then turned toward the blind.

“At this point, Gabe took the shot! The bird went immediately down,” Dana said. “I yelled to Gabe, ‘great shot!’ He was so happy.

The turkey, which weighed 20 pounds, was the icing on the cake for a lifelong memory all involved could share.

“Our friend Steve Colbath has provided my son his land on which Gabe has shot his first deer and first tom. Thanks, Steve, you’re a great friend!” Dana said.