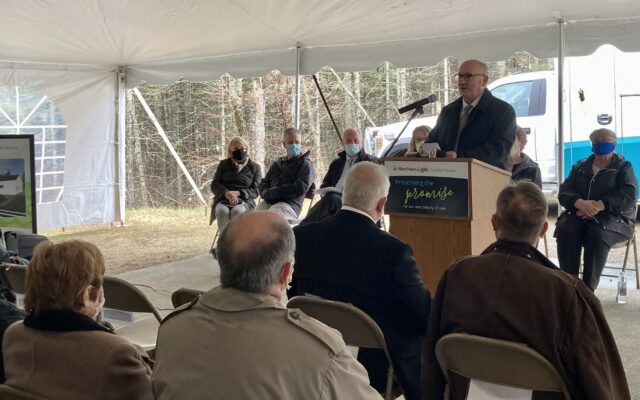 Valerie Royzman • May 5, 2022
GREENVILLE — Construction has begun on a new $23.1 million hospital that will serve Greenville and surrounding areas of Piscataquis County.

GREENVILLE — Construction has begun on a new $23.1 million hospital that will serve Greenville and surrounding areas of Piscataquis County.

Northern Light Health announced the replacement of C.A. Dean Hospital in Greenville in March 2021. The new structure is set to open in the summer of 2023.

Replacement of the century-old hospital has been a long time coming, Northern Light Health officials said during a groundbreaking ceremony Wednesday. Significant increases in labor and building material costs boosted the price tag by millions of dollars more than originally planned. Northern Light Health has prioritized the project because it serves rural communities in the Moosehead Lake region with high rates of poverty and an aging population, C.A. Dean Hospital President Marie Vienneau said.

“We will continue to focus on our region’s greatest health needs, including access to care, substance use disorder, food insecurity and many other chronic conditions,” she said during Wednesday’s event.

The new structure will house five private rooms with acute/swing beds, a 24/7 emergency department and imaging and lab services. A separate ambulance station and helipad will be built. The existing east wing will be renovated to house 10 private rooms with swing beds, hospital officials said.

“The new hospital will not offer new services, at least initially,” Northern Light Health spokesperson Andrew Soucier said earlier this week. “However, telehealth capabilities will be built into the patient rooms and emergency department, which will open up possibilities for increasing access to care using technology.”

The new hospital is being constructed behind the existing campus, which will be demolished. Its service area extends across the Moosehead Lake region to the Canadian border, Vienneau said. The hospital is 45 minutes from the next nearest medical facility, she said.

C.A. Dean Hospital’s strength isn’t found in the bricks and mortar, but rather in the skills and care of the people inside, Chief of Medical Staff Joseph Babbitt said at Wednesday’s event.

“That only gets you so far for so long,” he said. “The story of small towns and rural health care in other communities in Maine and around the country doesn’t always end well. There are a lot of drying towns and closed mills, and there are a lot of shuttered rural hospitals.”

Small towns like Greenville have a choice to wither and die or grow and thrive, he said. He thanked hospital leadership, the 150 or so employees and the community for choosing the latter.

The hospital’s roots extend back to 1911, when Charles Augustus Dean founded the facility, Vienneau said. He wanted health care for his logging industry workers, which benefited the surrounding community, she said.

“More than a century later, we continue to embrace the values that made the original hospital what it was,” she said, including hard work and a strong sense of community.

A capital campaign, called Preserving the Promise, raised more than $6.2 million to fund the new hospital, according to hospital officials. That includes $4 million from late philanthropist Peter Buck, for whom the new main hospital building and ambulance station will be named.