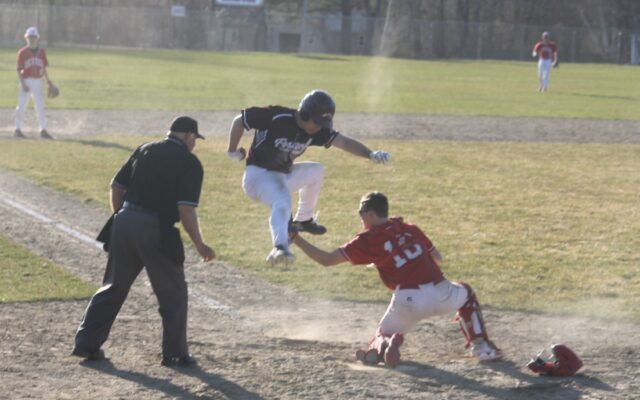 Stuart Hedstrom • May 4, 2022
DEXTER – Foxcroft Academy took advantage of having baserunners in every inning by scoring in each of the first three innings for a 5-3 victory at Dexter Regional High School in an interclass baseball game on Monday afternoon. The Class B Ponies (1-3) picked up the team’s first win of 2022, while the host Class C Tigers dropped to 2-3.

DEXTER – Foxcroft Academy took advantage of having baserunners in every inning by scoring in each of the first three innings for a 5-3 victory at Dexter Regional High School in an interclass baseball game on Monday afternoon. The Class B Ponies (1-3) picked up the team’s first win of 2022, while the host Class C Tigers dropped to 2-3.

Foxcroft’s Anthony Smith got the scoring started in the top of the first when he singled to deep centerfield to drive in Gideon Topolski for the 1-0 lead. A pair of singles gave Smith a team-high two hits and tied him for the game-high, he finished 2-for-3 with a walk in his other plate appearance and the RBI.

Run No. 2 came home as Chase Higgins scored on a throwing error intended to get Donnie Poole out at first.

The Ponies scored twice again during the team’s second trip to the plate as Dexter tried to catch Jadon Richard stealing at second base and Caden Crocker ran in from third with the throw going away from the plate to the top of the diamond. Two hitters later Higgins doubled to centerfield to drive in Richard for a 4-1 advantage (this was the first of two extra base hits for the Ponies).

With the baseball rolling into shallow centerfield on a throwing error during a stolen base at second base, Jack Day scored in the top of the third for what would be Foxcroft’s fifth and final run of the day.

Dexter put a run on the scoreboard in both the first and second. Following Payson Rienhardt’s leadoff walk and ensuing steals of second and third, he scored on a throwing error after Ben Bourgoin put the ball in play.

Reinhardt would follow his run scored with an RBI in the home half of the second. He grounded out with the throw reaching first, but this enabled Willis Reinhardt to score to make the game 4-2 at this point.

Foxcroft had 1,2,3 innings in both the bottom of the fourth and sixth and kept the Tigers from scoring in the fifth despite the team having two runners on base following a solo double play. Richard caught the ball near second and stepped on the bag himself to retire the side.

In the bottom of the seventh Smith, who took over on the mound an inning prior, struck out the first two batters he faced. Payson Reinhardt then had an infield single on a ball he hit to the grass beyond second base.

Reinhardt stole second with Bourgoin at the plate and a Bourgoin single over third base drove Reinhardt in from second for his second run of the game – making play 5-3.

A flyball in shallow centerfield was caught by Richard for the final out of the contest.

Poole earned the victory as he pitched the first 4.1 innings. Poole scattered two runs, five hits, and a pair of walks while striking out five.

Smith’s work in the sixth and seventh gave him the save. Smith yielded one run, two hits, zero bases on balls, and he recorded four strikeouts in two innings.

Higgins relieved Poole with one out in the fifth and runners at second and first. The southpaw induced the flyball Richard caught by second base for the doubleplay.

The two teams are scheduled to conclude the regular season with a rematch in Dover-Foxcroft at 4:30 p.m. on Thursday, June 2.