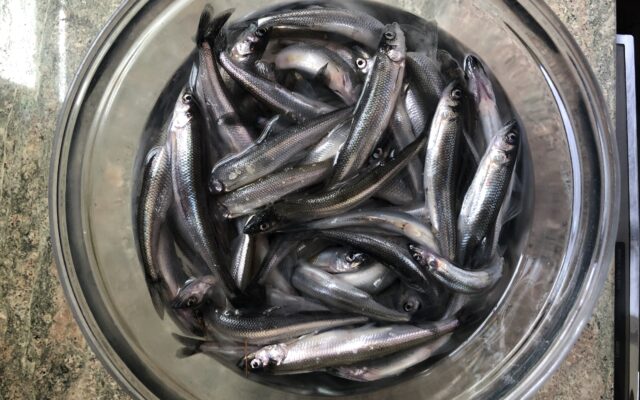 Contributed • May 4, 2022
By Nolan Raymond I’m sure many of you remember your first smelting trip. Mine was when I was 14.

I’m sure many of you remember your first smelting trip. Mine was when I was 14. My dad took my brother and me, along with a family friend, to a well-known area in the Katahdin region.

We arrived at the river around 7 p.m., found a spot along the bank, and waited. We were armed with “smelt nets”, long-handled nets with fine mesh, as well as one-quart containers.

As darkness cloaked the stream, chatter from other “smelters” downstream became louder. The smelts were a-runnin’! We slowly dipped our nets in the water, raking them with the current.

My first dip of the evening revealed my first ever smelts! In the bottom of the net were about eight silvery, finger-length fish. After depositing them in my tub, I went back for another scoop. This time, I could feel little taps reverberating up the handle. I realized that this sensation was smelts hitting the bottom of the net.

As I raised the net out of the water, the faint moonlight illuminated all I needed to see: the net was loaded with what must have been a gallon of squirming, shiny smelts! I finished my quart and released the rest back into the river, to continue in their spawning journey.

Smelts are an interesting species. Rainbow smelt, the fish we had set out to target, grow to about 7 inches. They’re a reflective silver, with an iridescent belly and spend most of their lives in coldwater lakes and ponds.

In the spring, the smelts make a “run” up the inlet river from the lake at night to spawn. For around a week and a half each spring, these inlet rivers will be full of smelts in the hours after dusk. They are in a dense group when they run; a single dip of a 20-inch-diameter net can scoop up a tremendous number of smelt.

There are a special set of laws that cover smelting. For starters, dip nets must be less than 24 inches in diameter. General law states that smelts may be dipped between noon and 2 a.m. Bag limits vary by location, so check before you go.

Smelting is pretty simple. First, find a known run. Game wardens, trading posts, fisheries biologists and seasoned outdoorsmen can certainly recommend some spots and give updates on whether the run has begun to produce yet.

Once the run has begun, you find a spot along the river to set up. Look for areas where the river narrows, as well as protruding points and such.

Occasionally dip your net in and drag it with the current, slowly and steadily. Try not to let your net hit bottom, as the noise could be disruptive. It’s best to find a rock to stand on, since wading isn’t usually necessary and can also spook smelt.

If a dip results in only a few fish, give it a minute and try again. It may be the beginning of a large group of smelt. Once they’re running full force, you’ll probably catch your limit in a few minutes’ time.

Avoid constantly dipping if you aren’t getting any, to allow the smelts to commit to running upstream without being spooked off. Bring a clearly  marked container for your limit, and pay attention not to take more than your fill.

Last weekend, I took a friend of mine smelting for the first time. We met up and headed north after our respective sports events. We didn’t make it to the run until around 8 p.m., but a quick chat with an angler informed us that they hadn’t started running yet.

We quickly changed into rubber boots, grabbed our nets and tubs, tucked our headlamps in our pockets, and made our way downstream. We picked a point where the river narrows, and found some rocks that protrude off the bank to stand on.

After a few dips, and a little waiting, we began getting some fish. Our first few dips produced only a handful. However, within a few minutes, our nets were coming up heavy — a mess of smelt! After we measured our quarts out, we began to pack up and head out.

A Game Warden was waiting at the road, and we had a good chat. He checked our licenses and ensured that we didn’t have too many smelt. I had a photo of my license saved on my phone, and I was intrigued to hear that this is an acceptable form of license.

For many younger sports, having a picture on your phone is much easier than remembering to grab your paper license before you leave.

Whether it’s smelting or some other outdoors adventure, bringing a friend along for their first time is rewarding, and a lot of fun!