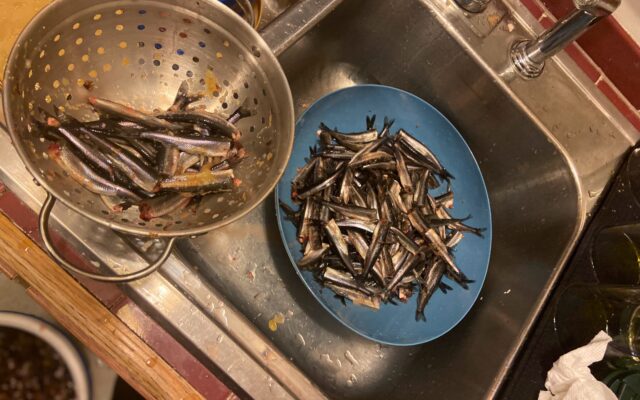 Contributed • April 28, 2022
By Matthew LaRoche, The Maine Woods Timing is everything when it comes to dipping smelts. One of the primary factors triggering the smelt run is water temperature, 42–45 degrees is ideal.

By Matthew LaRoche, The Maine Woods

Timing is everything when it comes to dipping smelts. One of the primary factors triggering the smelt run is water temperature, 42–45 degrees is ideal. A good friend of mine, retired Game Warden Charlie Davis, once told me that when the frogs start peeping in the spring the smelt are running. In northern Maine, the smelt run usually occurs in early May. It has been my experience that the smelt run occurs at or just before ice out in the lakes of northern Maine. A good place to ask if the smelt are running is at local sporting goods stores – however this information may be a few days old.

Smelting is one of the rites of spring for many die hard outdoorsmen and women. I certainly enjoy getting out there and dipping a few of these silvery delicacies each spring. Dipping smelts is not for the faint of heart, because more often than not the trip turns out to be waiting beside the brook for a couple hours with the harvest of only a handful of smelts to take home.

There are two types of smelt commonly sought by the sporting community in Maine. Sea run smelt, that grow to maturity in the ocean and run up freshwater streams to spawn. These are usually caught by hook and line in a shanty along the tidal sections of rivers and streams. The second type of smelt and focus of this article is the landlocked smelt – commonly called the rainbow smelt.

The rainbow smelt grows to maturity in freshwater lakes and ascends tributaries to spawn in the spring. The spawning run can last from a couple days to a couple weeks depending on the waterbody. Peak activity typically only lasts for a few days. Usually, the bigger the lake, the heavier and longer the smelt run.

Smelts normally run at night under cover of darkness but during the peak of the run can often be found at the lower end of the tributary swimming in big schools. It can be fun to dip during the day because the school of fish will move away from you as you try to get close enough to catch them.

One of my favorite smelting locations is the West Branch of the Penobscot where it runs into Ambajejus Lake. This run is usually heavy and lasts a week or more. When they are running well on the West Branch – one dip is typically all that is required for a limit. There are special smelting regulations on the West Branch, so check the law book before smelting there.

Cleaning smelts is not much fun, as a matter of fact once I have cleaned two quarts I don’t really want to eat any that night. I have a friend, Steve Day who doesn’t bother cleaning his smelts – he just fries them heads and all. I have eaten them cleaned and uncleaned and there really isn’t that much difference. But my wife likes them cleaned, so we clean ours before cooking.

The traditional method of cooking smelt is to mix flour, cornmeal, and Cajun seasoning in a plastic bag. Put enough of the silvery little fish in the bag to fill the frying pan, then shake the fish in the bag until they are well coated with the mixture. Drop the smelt into a skillet of hot cooking oil and fry until they are cooked, then scoop them out of the pan with a slotted spoon and drain on paper towels, serve hot.

My wife’s recipe uses the same mix as above, but instead of frying them she places them on a cookie sheet and drizzles melted butter over the seasoned fish. Then they are cooked in the oven at 425 degrees for about 20 minutes. They are best when eaten hot, right out of the oven. I eat them just like French fries, except I don’t eat the tails. At the end of the meal, I have a nice little pile of fish tails on the side of my plate and very satisfied taste buds.

LaRoche is a retired superintendent of the Allagash Wilderness Waterway, owner of Maine Woods Guide Service, and an avid outdoorsman. He can be reached at 207-695-2877 or at matt.laroche2877@gmail.com. See www.mainewoodsguide.com. This article first appeared in the April edition of the Northwoods Sporting Journal.