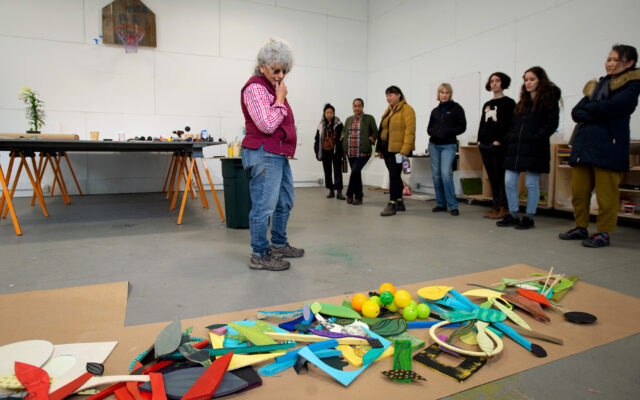 Valerie Royzman • April 26, 2022
MONSON — Garments are tacked to the wall and excess fabric is strewn across the wooden floor of an upstairs studio at the Monson Arts Gallery. A visiting artist from Rhode Island, focused mainly on textiles, is collaborating with a Maine-based creator to explore the connection between the dream state and spirit dialogue.

MONSON — Garments are tacked to the wall and excess fabric is strewn across the wooden floor of an upstairs studio at the Monson Arts Gallery. A visiting artist from Rhode Island, focused mainly on textiles, is collaborating with a Maine-based creator to explore the connection between the dream state and spirit dialogue.

A Portland-based artist experiments with terracotta plates that carry a deeper meaning about meals and stories told around the table in another studio. Writers from Minnesota, England and elsewhere sit tucked away at their desks in a neighboring building, their walls covered with annotated poems and photographs and window sills lined with orange peels and makeshift altars.

These are among the 10 artists who are in residence for a month in downtown Monson as part of a program that is bringing diversity to one of Maine’s most rural counties.

The town in Piscataquis County, the poorest and one of the least diverse counties in Maine, was on the cusp of being forgotten several years ago. The town of 609 or so residents, known for its slate quarries and furniture-making, also has a historic past tied to the arts, which Portland-based Libra Foundation focused on when it invested more than $10 million into revitalizing the town starting in 2017. Now that an artists’ residency and workshop programs are more established in Monson, artists are coming — up to 100 rotate through a residency program every year — and are transforming the community into a hub for diversity.

The current group of artists are here for a residency program that provides a $1,000 stipend, private bedrooms in shared houses and meals prepared by chef Marilou Ranta, who is originally from the Philippines and resides in Monson. They were selected from a competitive pool of applicants to recapture what creative people are always chasing — time, uninterrupted by the outside world.

A cohort usually features five writers and five visual artists, including a photographer — part of the Abbott Watts residency launched in 2021 — who gets to use local artist Todd Watts’ studio in nearby Blanchard with a darkroom and other equipment. Monson Arts also offers two-week residencies with a $500 stipend.

Interest in the residencies depends on the season, but more than 2,000 people have applied in the last four years, said Chantal Harris, who began as the new Monson Arts director in January.

The visiting artists and writers are all on unique journeys with their work. Some are starting daunting projects that have lived in their heads for years, while others are trying to wrap up work to eventually be exhibited or published. Some are experimenting and letting intuition guide them.

Although visiting artists spend several weeks in a homogeneous community, they understand that Monson is a safe, creative space for them, Harris said. They build connections with locals whom they might meet at the Monson General Store or while traveling to Greenville, she said.

The artists recently visited Sheldon Slate Products Co., where they learned how ancient rock is excavated, shaped and turned into objects that become part of daily life in Monson. Writer Preeti Kaur Rajpal of Minnesota was struck by a phrase from an artisan who works on headstones.

“Even in death, there’s art,” Rajpal said, an idea the artisan has been ruminating on and could turn into a poem. She is finishing her debut book of poems, set to be published by Massachusetts-based Tupelo Press in 2023. The book, called “membery,” explores belonging, India’s partition and the racialization of Sikhs following 9/11.

The artists admire the skill and ingenuity when they visit places such as Sheldon Slate Products and a local man’s sawmill, said Stuart Kestenbaum, who began designing the residency program in 2017 and now works for the Libra Foundation as a senior adviser to Monson Arts.

“They actually are so intrigued by the sense of place and the beauty of it that they can honor the place [for] what it is,” he said.

Jenny Ibsen, a printmaker and storyteller based in Portland, is working on projects in different mediums. During a studio tour for the group of visiting artists last week, Ibsen highlighted her unfinished ceramics, noting that clay is new for her.

Ibsen, who was born in China and was adopted and raised by white parents in Connecticut, notices domestic themes in her creations.

“Take this plate. Hold it,” she said, reading from an unglazed terracotta plate etched with her words. “Feel the rough edges and the smooth surface against your fingertips. Imagine its surface as a vessel, carrying the meals that feed us and the stories that nourish us.”

Marta Bausells, a writer from Barcelona, Spain, who lives in London, is writing a novel that is still taking shape. The work of fiction follows several women during the years before the pandemic and explores friendship and love, she said.

At a table in her studio, Bausells has laid out black and white printed photographs of her apartment and intimate spaces during the COVID-19 lockdown. The images document her writing process and are here for pure play, she said. Sometimes Bausells will situate the prints in nature, like in the snow or near Lake Hebron, and photograph the contrast when she needs a break from her writing.

Although the mark that the Libra Foundation left on Monson was significant — 15 buildings were renovated, including the general store and medical center — changes have happened incrementally, which allows for a “human-level exchange,” said Kestenbaum, who is also Maine’s former poet laureate.

“You can have a friendly one-on-one,” he said. “That makes a big difference in terms of how people look at a community and how a community looks at people coming in.”

Jemma Gascoine, who owns Monson Pottery and is married to photographer Todd Watts, lives in nearby Blanchard. The transformation of Monson in recent years has tipped the scale in terms of emphasis on the arts, with more people coming to the town seeking artistic things to do, she said.

Diversity in a place like Monson brings people with varying ages, races and cultures together to talk about their differences, which matters when it comes to solving the world’s larger problems, Gascoine said. There’s no future for a community that embraces singular mindset.

“Definitely, there’s been a big change,” said Gascoine, who is originally from the suburbs of London. “It’s great to have these cosmopolitan people walking downtown in February with their different fashion and hairstyles. I think it’s really good for us.”