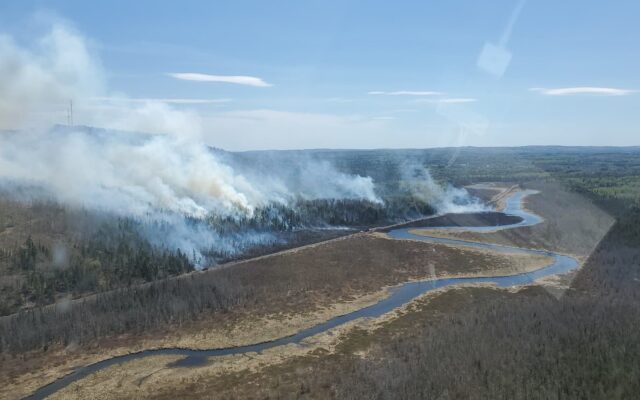 Contributed • April 9, 2022
By Abigail Curtis, Bangor Daily News Staff Wildfire season in Maine appears to be getting worse, something that Maine Forest Service Director Patty Cormier attributes to the changing climate.  Spring is the busiest season for wildfires, she said, after the snow melts and before new vegetation greens up and provides more moisture to the landscape.

Wildfire season in Maine appears to be getting worse, something that Maine Forest Service Director Patty Cormier attributes to the changing climate.

Spring is the busiest season for wildfires, she said, after the snow melts and before new vegetation greens up and provides more moisture to the landscape.

So far this year, the forest service has counted 73 wildfires. That’s nearly 50 percent more than the average of 50 wildfires usually seen by this point.

In Maine, which is 90 percent forested, the numbers of wildfires have been averaging higher in recent years, she said. In the past, the state’s average number of wildfires was usually around 400 or 450 per year. But in 2020, there were more than 1,100 wildfires. Last year there were around 650 fires.

“It’s not much of a study timeline, but we’re seeing that upward trend,” Cormier said. “Again, climate is such a whiplash that it’s creating this variability that makes it hard to predict.”

The more extreme weather that Maine is seeing in recent years is part of the problem. In general, conditions seem to be windier than in the past, she said, and although there have been many big rain events when inches and inches of water fall, a lot of that water runs off rather than soaking into the ground. And right now, much of the western part of the state is still in abnormally dry or drought conditions.

“Our dry periods are just drier. These extremes we’re seeing, up and down and up and down — that’s why our wildfire averages are going up,” she said.

Even after a day of sustained rain, as was the case in much of the state on Friday, high winds can cause the landscape to dry out fast.

“It definitely does seem windier, and that’s part of the equation of drying out quickly,” Cormier said. “You can have a wet day, and then boom — the wind can preheat things and spread the fire. All part of that wild card.”

Typically, Maine has three seasons when wildfires are more likely to occur. The first is in the spring. The second season happens in late summer, when the forest dries out and big logs that have fallen down “become kindling,” she said. Finally, after the first frost happens in the fall, grass and leaves are dead and become dry and flammable again.

The most common cause of wildfires is burn piles which get out of control, Cormier said. Another component is machinery. If a homeowner is working with their tractor in their field, if they nick a rock and the conditions are right, it can send off a spark that catches fire, she said.

The coronavirus pandemic may also have played a role in the increased numbers of wildfires in the last couple of years.

“People were home a lot more, working on machinery in the back field, and more fires were starting then,” she said. “We also had a big increase in campfires. People who had never been in the woods didn’t realize how much you have to extinguish a campfire. I always tell people, if you think a fire’s out, put it out another five times. Then you’ll be all right.”

People can help decrease the chance of wildfires by using common sense and following the law. The state requires that people get a free burn permit before starting a brush or debris fire. On the permit, there are safety requirements, including the type of tools needed on hand and the times when burns are allowed. If conditions are deemed generally unsafe, the system won’t allow permits to be issued.

“The system is designed with safety in mind,” Cormier said. “If it’s not safe to burn, then don’t. To me, it’s just be mindful. Think about the conditions, the wind. You don’t want to be the one who’s on the news. Nobody wants that. It makes a big splash when our helicopter shows up to drop water.”

In addition to the fleet of five or so helicopters, the Maine Forest Service also has additional tools to help fight wildfires. After a lightning storm, officials can use drones to help scan the landscape for smoke from a lightning strike. And through a federal system, officials are alerted if satellites detect a heat signature from a likely wildfire.

“The rangers are trained in responding to fires,” Cormier said. “As long as we know about it, we can get there pretty darned quick.”

Although the future of wildfires here is hard to predict, she said that Mainers can take heart in knowing that the Pine Tree State is not likely to ever have the same fire danger as dry western states where fires create apocalyptic landscapes over huge stretches of terrain.

“Certainly, everybody sees on the news these horrific fires in the west. It’s different here,” she said. “We have much more moisture. We don’t have the same kind of vegetation.”